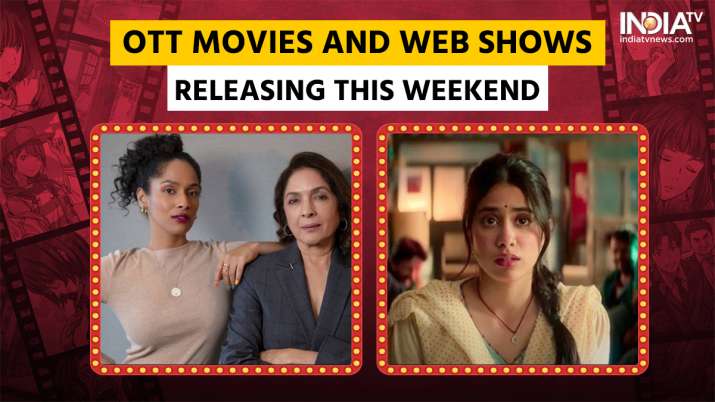 OTT Movies and Web Shows Releasing This Weekend (July 29): As the month of July comes to an end, many Bollywood movies and South films made their presence felt on the OTT platforms. In the last weekend, there is an interesting lineup of films and shows on Netflix, Amazon Prime Video, Disney Plus Hotstar, Voot Select, and Zee5 among others ranging in the genres of comedy, thriller, drama, romance and others. While Janhvi Kapoor‘s film Good Luck Jerry will take you on an exciting ride, you will witness a lot of drama watching Masaba Masaba 2. So grab your popcorn and binge-watch these movies and shows on OTT now-

Good Luck Jerry is a con-medy of the survival of the wittiest when pushed to the wall. Here, chaos gets unspooled at every turn. The film stars Janhvi Kapoor as the docile yet gritty character along with a terrific ensemble, including Deepak Dobriyal, Mita Vashisht, Neeraj Sood and Sushant Singh. The film is directed by Siddharth Sen who makes his debut with the crime comedy.

Based on the life of mother-daughter duo Masaba Gupta and Neena Gupta, the web show Masaba Masaba 2 will take you through love, loss and lots of badassery as the designer decides to listen to her “dil ki baat”. The first season of the show was a hit among the viewers and season 2 is now expected to make waves alike. In the show, while Neena gears up to revive a popular show from her past, Masaba decides to leave the past behind and focus on the future- of her brand and herself.

Rakshit Shetty, Sangeetha Sringeri, Raj B Shetty, Bobby Simha and Danish Sait starrer 777 Charlie is one of the most loved films from the South. The film is an adventure comedy-drama in the Kannada language. It collected more than Rs 100 cr at the box office and was made at a budget of Rs 20 crore.

Paper Girls is based on the graphic novel of the same name. It revolves around four girls who deliver papers at various places. It juggles through timelines as the girls get to know about their future and the possibility of changing their life in the present.

SRO’s scientist Nambi Narayan biopic Rocketry: The Nambi Effect starring R Madhavan has garnered praise from all corners. Now, it is ready for the OTT premiere. Talking about the film, R. Madhavan said, “It’s an incredible honour for me to be able to bring this story to life. I’m truly humbled by all the love that the movie has already received. Essaying this role and helming this incredible story of Nambi Sir was very crucial, and I’m glad that we will be able to reach many more households to inspire, enlighten and entertain through Amazon Prime Video.”

Which film or web show are you excited to watch this weekend?

Salman Khan on South films doing well, says ‘want to do best, but no formula to success’