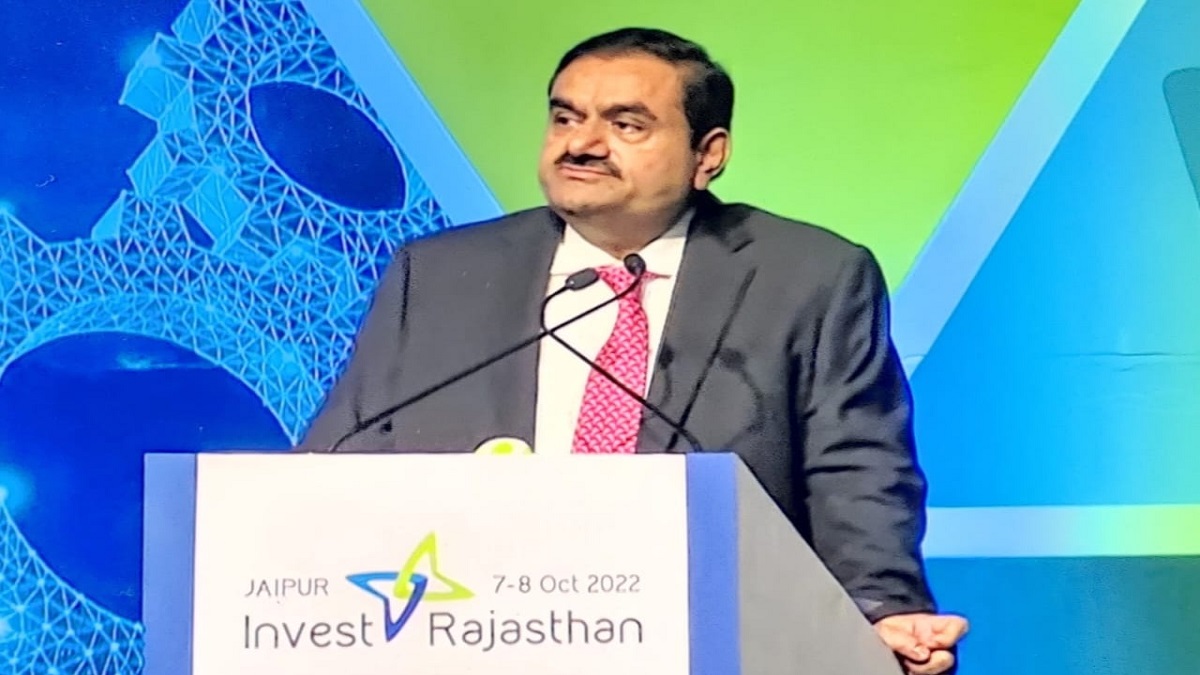 “This is the soil that gave us some of our bravest national figures – Hammira Deva, Maharana Kumbha, Hemchandra Vikramaditya,

Maharaja Suraj Mal and, of course, Maharana Pratap. The toughest of the deserts gave us the greatest of our warriors. No wonder – I find every visit to Rajasthan, personally very inspiring!” Adani added.

“Honourable Chief Minister, during your previous term, when I first met you to express our interest to invest in the power sector in Rajasthan, I clearly recall how you immediately supported us and directed your administration to identify and allocate land, water and other clearances in the shortest time possible,” the businessman said.

“That was the fastest decision-making process I have ever witnessed – and it was that speed which allowed us to set up the 1,320

megawatt Kawai Power Plant in just 36 months – a record for India and a record for any power plant the Adani Group has built super critical thermal. Honourable Chief Minister – sitting next door in Gujarat, I am also privileged to have a ringside view of your leadership – in Rajasthan’s social upliftment as well as in the state’s economic growth. The social welfare schemes you have implemented – like the Jagriti Back to Work Scheme, the Shakti Udan Yojana and the Mukhyamantri Anu-priti Coaching Scheme – are trendsetters in driving employment, enabling greater and inexpensive access to education and healthcare, thereby making social security stronger. These schemes have been benchmarks for India in their scale, their intent and the impact that they have had,” he mentioned.

“In the economic domain, your vision has laid the foundation to turn Rajasthan into our nation’s solar energy leader. It is fascinating to see you repurpose – what many call the inhospitable Thar desert – into one of the global capitals of renewable power. Our commitment to your vision is reflected in our actions. Our JV with the Rajasthan Government, which has led to a fully-functioning solar park of 10,000 megawatts, is

already producing over 1,500 megawatts of green power. Also, our Group’s direct investment into renewables in Rajasthan continues to accelerate and we have already commissioned projects of over 4,000 megawatts at an investment of Rs 20,000 crore,” Adani said.

“In addition, over the past decade, we have been supplying fuel to help Rajasthan generate over 4,300 megawatts of thermal power. We have been operating 19 grid sub-stations and associated high-voltage transmission lines – operating the dry port container terminal in Kishangarh – managing and expanding the Jaipur airport, as well as operating two edible oil manufacturing plants in Alwar and Bundi,” he added.

“Overall, I am proud to say that the Adani Group has already invested over Rs 35,000 crore across multiple industrial sectors in the state of Rajasthan. Let me now talk about our future investments. Continuing our investment in the renewables business, another 10,000 megawatts, with

an investment of Rs 50,000 crore, is under implementation – and this will be commissioned progressively over the next 5 years. In this context – just a week ago – we also achieved commercial operation of the world’s largest wind-solar hybrid power plant –and it is here, in Rajasthan,” he added.

“Following our acquisition of Ambuja Cements and ACC, we are now the second largest cement manufacturer in India. While we already have three cement plants and limestone mining assets, a significant part of our capacity expansion will continue to happen in Rajasthan. We anticipate investing another Rs 7,000 crore to double our cement manufacturing capacity in the state,” Adani said.

“There is more. Other projects in various stages of execution and expansion include expanding the Jaipur airport into a world class facility, developing our networks to supply PNG and CNG and accelerate cleaner fuel availability to industrial, commercial, transport and domestic consumers, and new transmission projects to move the renewable power being generated. Combining all ongoing and future investments, we anticipate investing an additional Rs 65,000 crore in Rajasthan over the next 5 to 7 years and creating over 40,000 direct and indirect jobs.

The Adani Group is also making one of the world’s largest bets on Energy Transition. In this process, we are betting on green hydrogen, given our ability to generate the most inexpensive solar and wind power. I believe this opportunity to generate green hydrogen to transform Rajasthan’s deserts into ‘an oasis of jobs enabling energy transition’ is an opportunity that no other state has. Honourable Chief Minister, this will be, yet another game changer aligned with your vision for the sustainable industrial development of Rajasthan,” he added.