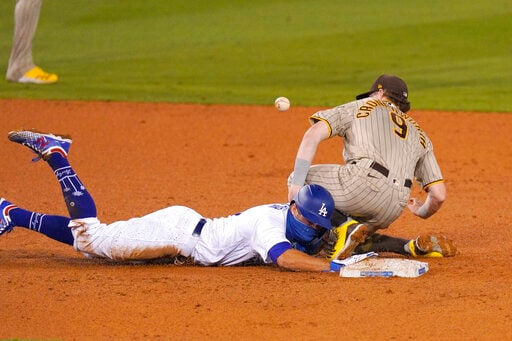 LOS ANGELES Eric Hosmer singled in the go-ahead run with two outs in the sixth inning, and the San Diego Padres beat the Los Angeles Dodgers 2-1 in the series opener Monday night.

Joc Pederson bobbled the ball on Hosmers hit to left and couldnt attempt a throw as Trent Grisham scored from second after Dustin May (1-1) walked him, giving the Padres a 2-1 lead.

Austin Hedges homered with two outs in the fifth to tie it at 1. It was Hedges third hit and first homer of the season and only the second home run given up by May.

Emilio Pagn retired Mookie Betts, Cody Bellinger and Justin Turner in order in the eighth, and the Dodgers managed just four hits. Betts, Bellinger and Turner were 1 for 4 with a strikeout each. Los Angeles was 1 for 8 with runners in scoring position.

Cal Quantrill (2-0) got the victory with three innings of relief. He allowed two hits and struck out three.

Drew Pomeranz retired the side in the ninth for his third save.

The Dodgers had runners on first and third with two outs in the seventh. Chris Taylor walked, took second on a groundout and went to third on a pickoff error by catcher Hedges. Pederson’s comebacker off Craig Stammen ricocheted into the glove of shortstop Fernando Tatis Jr., who stepped on second to end the inning.

Los Angeles loaded the bases in the fourth, but Edwin Ros lined into a double play to first with Taylor getting doubled off the bag to end the threat.

The Dodgers led 1-0 on Bellinger’s RBI single on a two-strike swing in the first.

May gave up two runs and five hits in six innings. He struck out two and walked two.

San Diego’s Luis Perdomo made his first start since June 9, 2019, in place of Garrett Richards. The right-hander allowed one run and two hits in one inning, and walked one.

Dodgers: RHP Joe Kelly went on the 10-day injured list with right shoulder inflammation retroactive to Sunday. … LHP Alex Wood (shoulder inflammation) threw a 30-pitch bullpen session Monday. He’ll toss a simulated game on Thursday. … SS Corey Seager continues to receive treatment and is moving around better since leaving a game last week with lower back discomfort. The team has not decided if he’ll go on the IL.

Less than two weeks ago, Kelly was suspended by MLB for eight games for throwing two pitches near the heads of Houston hitters. Manager Dave Roberts said the appeal hearing was Monday and he expects a ruling in the next few days. Any suspension would not begin until Kelly comes off the IL.

Tatis swung so hard he fell down and his bat smacked him in the rear in the third inning. He ended up striking out swinging.

Padres: RHP Richards (0-1, 4.60 ERA) had his scheduled start pushed back to Tuesday to give him extra rest.