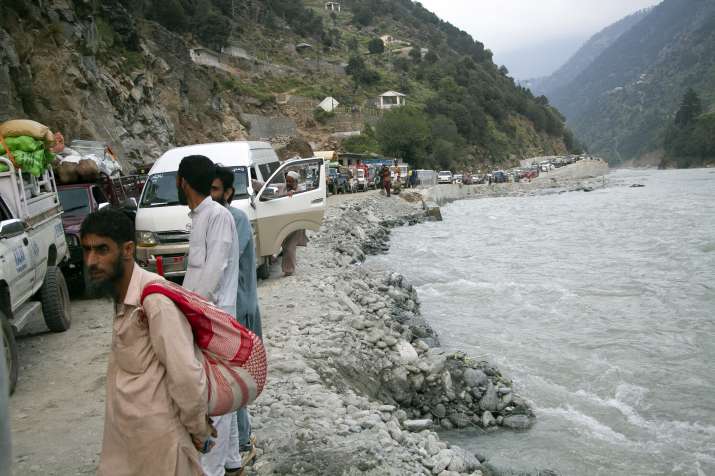 Pakistan flood: United Nations (UN) Secretary-General Antonio Guterres said on Friday that floods are estimated to have caused about USD 30 billion in economic losses to Pakistan, which is facing its worst floods situation in the last 30 years.

Guterres, who is visiting Pakistan on a two-day solidarity visit, asked the international community to come forward to help Pakistan to tackle the fallout of the massive floods which affected more than 33 million people and submerged one-third of the country.

“Pakistan needs massive financial support to respond to this crisis as according to initial estimates the losses are around USD 30 billion,” said the Secretary-General, who was speaking at the National Flood Response Coordination Centre (NFRCC) alongside Prime Minister Shehbaz Sharif.

Guterres also said that there was “no memory of anything similar to what has happened with the impact of climate change in Pakistan” and added the number of losses and victims was appalling.

“The numbers are appalling. But beyond the numbers, I see the families that have lost their loved ones, houses, crops, jobs and are living in desperate conditions,” he said, adding that effective solidarity and justice can be shown by mobilising massive support for Pakistan.

The havoc caused by unprecedented rains and floods has killed nearly 1,350 people since early June.

The estimated losses by the UN chief exceeded the USD 17-18 billion rapid assessment cost on projected economic losses as calculated by the government and endorsed by the provinces, according to The News International.

It reported that the losses further increased mainly because agricultural crops have been destroyed across 8.25 million acres as compared to an initial assessment of 4.2 million acres. Cotton, rice, and minor crops have been damaged severely and if de-watering is not done properly, it can cause serious problems for wheat sowing, according to the paper.

The cotton crop has evaporated in most parts of the country and now wheat sowing is under threat.

On August 31, the UN and Pakistan government jointly appealed for USD 160 million in emergency funding to help those affected by the floods.The Ministry of National Food Security has been assigned to come up with a summary to increase the minimum support price of wheat for the coming crop.

The authorities have held meetings with international donors and assured them that Pakistan would place an effective monitoring and evaluation system to utilise each and every penny to mitigate the flood losses in a transparent manner.

“The UN secretary-general is due on Friday for a three-day visit and Islamabad is going to share the rapid assessment cost with him. The international donors under the supervision of the World Bank are making their separate study on Damage and Need Assessment and then these figures will be reconciled,” official sources told The News on Thursday.

The Ministry of Planning is undertaking an exercise to slash down the Public Sector Development Programme (PSDP) by Rs 250 to Rs 300 billion to bring it down from Rs 800 billion to Rs 500 to Rs 550 billion for the current fiscal year. These resources will be diverted toward the flood-affected areas.

When contacted, Minister of State for Finance Aisha Ghaus Pasha, who was inquired about the latest rapid assessment cost, refused to share the exact information and said that the cost had escalated and efforts were underway to finalise it by giving a cut-off date.

However, the floods damaged the agriculture sector and the industrial sector also gave an indication of slowing down, so the GDP growth might be below two per cent, reported the paper.