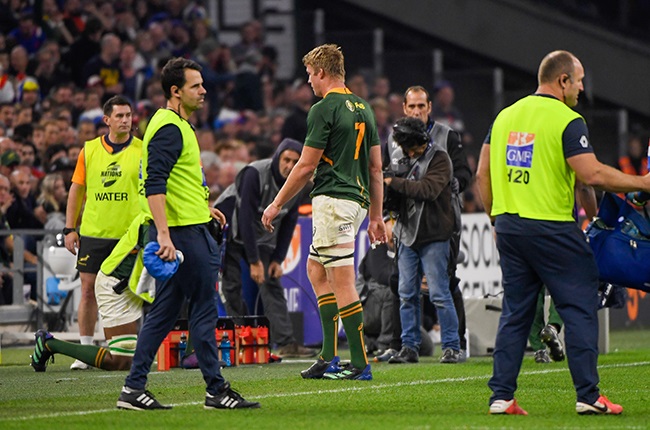 Springbok flanker Pieter-Steph du Toit trudging off the field after being sent off by referee Wayne Barnes.

Springbok loose forward Pieter-Steph du Toit has been suspended for three weeks for his clean-out misdemeanour in last week’s Test against France.

The loose forward was sent off for dangerous and reckless play in the 11th minute by English referee Wayne Barnes.

Du Toit’s head made contact with that of France’s centre Jonathan Danty, with the French midfielder forced to leave the field permanently.

Du Toit appeared before an independent judicial committee via video link on Wednesday morning. He was initially sanctioned under Law 9.12: a player must not physically or verbally abuse anyone.

After considering all available evidence, including multiple broadcast angles and submissions from the player and his representative, the judicial committee considered and accepted submissions from Du Toit’s representative that the charge be amended to Law 9.11: players must not do anything that is reckless or dangerous to others including leading with the elbow or forearm.

The disciplinary committee found Du Toit’s offending to be “reckless” although not intentional or deliberate.

Their statement read: “Although there were some external factors identified with respect to the incident, they were not, on the evidence before the judicial committee, of a sufficient degree to justify a reclassification of the offending to below red card.

“Given the player’s offending involved head contact with an opposition player, the judicial committee applied World Rugby’s mandatory minimum mid-range entry point for foul play in breach of Law 9.11 resulting in contact with the head. This resulted in a starting point of a six-week/match suspension.

“Having acknowledged mitigating factors including the player’s evidence of remorse, contrition, exemplary prior disciplinary record and conduct during the hearing, the judicial committee reduced the six-week/match entry point by three weeks/matches, resulting in a sanction of three weeks/matches (to be served as the following given the player’s upcoming playing schedule).”

Du Toit’s international season is therefore over as he’ll miss this weekend’s Test against Italy in Genoa, next week’s game against England at Twickenham (26 November) and a third match yet to be determined.

World Rugby, however, noted that Du Toit was granted permission to apply to take part in the Coaching Intervention Programme. If he completes it, the final match of his suspension will be rescinded.

Du Toit has the right of appeal within 48 hours of the issuing of the full written decision.