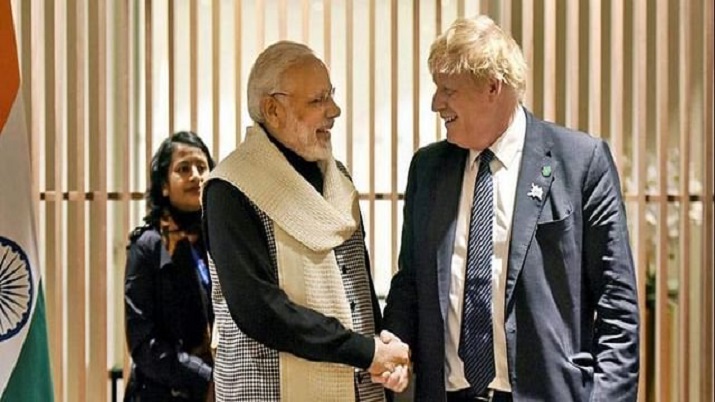 Prime Minister Narendra Modi and his British counterpart Boris Johnson spoke over the phone on Monday during which they took stock of India-UK trade and defence talks, opening up of international travel between the two countries and climate action targets in the lead up to the COP26 summit, Downing Street said.

The UK’s recognition of “Indian vaccine certification” was among the welcome developments highlighted on both sides, as Covishield-vaccinated Indians travelling to the UK will no longer be required to undergo a compulsory 10-day quarantine at a declared address starting Monday.

“The Prime Minister and Prime Minister Modi discussed the shared fight against coronavirus and the importance of cautiously opening up international travel,” a Downing Street spokesperson said, with reference to a readout of the conversation.

“They agreed the UK’s recognition of Indian vaccine certification is a welcome development to that end,” the spokesperson said.

The UK government on Thursday announced that Indian travellers fully vaccinated with both doses of Covishield will not require to undergo quarantine in Britain from October 11, putting an end to a diplomatic row over vaccinated Indians being treated differently from other countries.

With reference to the bilateral relationship, both leaders welcomed progress towards a trade agreement and also noted the journey of the UK Carrier Strike Group, led by HMS Queen Elizabeth, as a sign of deepening strategic partnership between the two nations.

The Carrier Strike Group, which set off on its maiden operational deployment in May, has sailed the Atlantic Ocean, through the Mediterranean and Indian Ocean to the Western Pacific – participating in a range of activities with partners and allies enroute.

The two leaders had connected for a virtual summit in May to sign off on an Enhanced Trade Partnership (ETP) and the 2030 Roadmap, which sets a framework for working towards a free trade agreement (FTA) between India and the UK.

“They discussed the strength of the UK-India relationship and welcomed the progress made on the 2030 Roadmap since it was agreed by the Prime Minister and Prime Minister Modi in May. This includes in areas such as trade and defence,” the spokesperson said, with reference to a readout of the conversation.

“The leaders looked forward to the upcoming visit of the UK Carrier Strike Group to India and the deepening of the UK-India strategic partnership,” the spokesperson said.

On the issue of climate change, Johnson hailed India’s achievement in the field of renewables and sought “more ambitious” action from India.

“The Prime Minister (Johnson) underlined the importance of making concrete progress on climate change ahead of and at the upcoming COP26 Summit (in Glasgow). He noted that India already leads the world in renewable technology and expressed his hope that they will commit to a more ambitious Nationally Determined Contribution and to achieving Net Zero emissions,” Downing Street said.

Besides, regional issues related to Afghanistan and dealing with the Taliban regime also came up during Monday’s talks between Johnson and Modi.

“The leaders also talked about the current situation in Afghanistan. They agreed on the need for a coordinated international approach to engagement with the Taliban, emphasising the importance of upholding human rights in the country,” Downing Street said.

The Taliban seized control of Afghanistan in mid-August, ousting the previous elected government which was backed by the West. The Taliban, ousted from power by the US shortly after the 9/11 attacks, now control nearly all of the country.

The Ministry of External Affairs (MEA) has announced that Modi will participate in the upcoming G20 Extraordinary Leaders’ Summit on Afghanistan on October 12 in virtual format. The Summit is being convened by the G20 Italian Presidency.