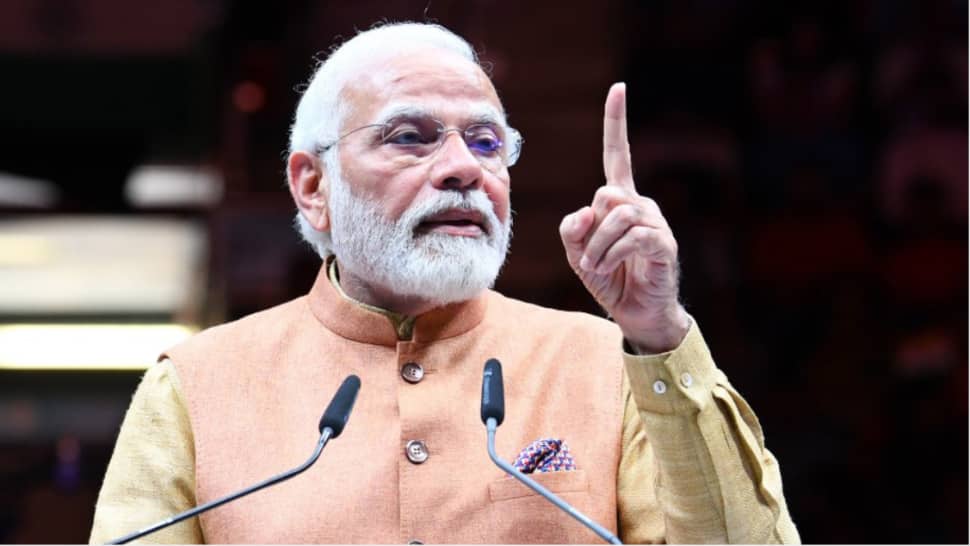 New Delhi: Prime Minister Narendra Modi will today (September 29, 2022) begin his two-day visit to his home state Gujarat. In the poll-bound state, he is scheduled to inaugurate and lay the foundation stone of various development projects worth around Rs 29,000 crores in programmes spread across Surat, Bhavnagar, Ahmedabad and Ambaji.

Later in the evening around 7 PM, PM Modi will inaugurate the 36th National Games at Narendra Modi Stadium in Ahmedabad and then at 9 PM, he will attend the Navratri Festival at GMDC ground in Ahmedabad.

On his second day, he will flag off the Gandhinagar- Mumbai Vande Bharat Express at Gandhinagar station and travel on the train from there to Kalupur Railway Station. He is also slated to flag off the Ahmedabad Metro rail project and take a metro ride from Kalupur station to Doordarshan Kendra metro station.

Later in the day, Prime Minister Modi will inaugurate Phase-I of the Ahmedabad Metro project at a public function at the Ahmedabad Education Society in Ahmedabad. Thereafter, at around 5:45 PM, he will lay the foundation stone and dedicate various projects worth over Rs 7200 crore in Ambaji. In the evening, PM Modi will perform Darshan and Pooja at Ambaji Temple and around 7:45 PM, he will attend Maha Aarti at Gabbar Tirtha.

The Prime Minister will inaugurate Phase-I of road infrastructure works and the main entrance of Diamond Research and Mercantile (DREAM) City. DREAM City project has been launched with the vision to meet the growing demand for commercial and residential space to complement the rapid growth of the diamond trading business in Surat. He will also lay the foundation stone for Phase-II of the project.

The works whose foundation stone will be laid or dedicated to the nation include projects related to urban regeneration, a Biodiversity park, a science centre and Phase-2 of DREAM City. These works will ensure a better quality of life for the people of Surat. pic.twitter.com/yK7HX5aHDH
— Narendra Modi (@narendramodi) September 28, 2022

He will lay the foundation stone of Biodiversity Park, which is being built in an area of over 87 hectares from Dr.Hedgewar Bridge to Bhimrad-Bamrolli Bridge.

Prime Minister will also inaugurate Khoj Museum at Science Centre in Surat. Built for children, the Museum will have interactive displays, inquiry-based activities and inquisitiveness-based explorations.

Prime Minister Modi will inaugurate and lay the foundation stone of projects worth over Rs 5200 crore in Bhavnagar. He will lay the foundation stone of the World’s First CNG Terminal and of brownfield port at Bhavnagar. The port will be developed at a cost of over Rs. 4000 crores and will have the state-of-the-art infrastructure for the world’s first CNG Terminal along with the world’s fourth largest lock gate system.

He will also inaugurate the Regional Science Centre in Bhavnagar, which is spread over 20 acres and has been built at a cost of around Rs. 100 crore.

Bhavnagar is all set to get a CNG Terminal and brownfield port project. The economic benefits of these would be immense. The water supply projects are going to help our hardworking farmers. pic.twitter.com/HPKvzJcsKZ
— Narendra Modi (@narendramodi) September 28, 2022

In Ahmedabad, PM Modi will declare the 36th National Games open in a grand opening ceremony organised at Narendra Modi Stadium. He will also address athletes from across the country taking part in the National Games. During the event, the Prime Minister will also inaugurate the world-class “Swarnim Gujarat Sports University” in Desar.

Calling upon all youngsters and sports lovers to join tomorrow’s National Games Opening Ceremony and to keep cheering the athletes as the games progress. https://t.co/yZrYaVgtn2
— Narendra Modi (@narendramodi) September 28, 2022

Spectacular drone show in Ahmedabad as the city prepares for the National Games opening ceremony! pic.twitter.com/OumqeCZhve

At a public function in Ahmedabad, Prime Minister Modi will also inaugurate the Phase-I of the Ahmedabad Metro project. This comprises about 32 km of the East-West corridor from Apparel park to Thaltej and the North-South corridor between Motera to Gyaspur. The Thaltej-Vastral route in the East-West corridor has 17 stations. This corridor also has a 6.6 km underground section with four stations. The 19 km North-South corridor that connects Gyaspur to Motera Stadium has 15 stations. The entire Phase 1 project is built at a cost of more than Rs. 12,900 crores.

Prime Minister will also flag off the new and upgraded version of Vande Bharat Express between Gandhinagar and Mumbai.

Other projects whose foundation stone will be laid include the construction of the runway and associated infrastructure at Airforce station, Deesa; Ambaji Bypass Road among others.

He will also dedicate various road projects including the widening of Mitha – Tharad – Deesa Road among others.