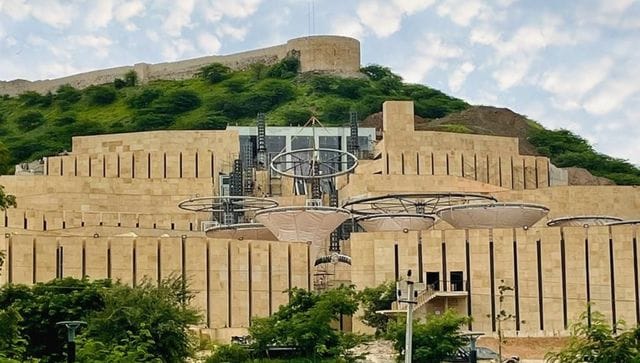 The wall of the check dams at Smritivan museum will display the names of 12,932 victims who lost their lives during the 2001 Gujarat earthquake

On Sunday, Prime Minister Narendra Modi will inaugurate a museum that honours the victims of the 2001 Bhuj earthquake.

Modi, during his two-day visit to poll-bound Gujarat, will on 27 August attend an event on the Sabarmati Riverfront in Ahmedabad where several weavers will weave ‘charkha’ (spinning wheel).

On Sunday, Modi will travel to Kutch district and dedicate the ‘Smritivan’ memorial, built atop Bhujiyo Dungar near Bhuj town, the district headquarters and epicentre of the earthquake.

Today, its development is known globally. It was the resolve of PM Modi, during his days as the Chief Minister of Gujarat, to build a museum. Today, Government of Gujarat led by Chief Minister Bhupendra Patel has worked tirelessly to ensure the timely completion of this project. pic.twitter.com/upahhuVAMl

Let’s look at the ‘Smritivan’ memorial and the Gujarat earthquake:

Smritivan Memorial project, which pays tribute to the lives lost during the 2001 Gujarat earthquake, spans 470 acres,

It has eight blocks entitled Rebirth, Rediscover, Restore, Rebuild, Rethink, Relive and Renew which offer different attractions based on their respective names. The project, spread across 170 acres of land, boasts of an earthquake museum spanning over 11,500 square metres, 50 check dams, sun point and pathways with an overall length of eight kilometres.

As part of the Smritivan project, an over 300-year-old fort wall has been restored. Notably, the wall of the check dams will display the names of 12,932 victims who lost their lives during the earthquake.

The walls and floors of the museum have been built using the local stone of Kutch, which strengthens with wear and tear. The memorial has  parking space for 3,000 visitors.

The state-of-the-art simulator theatre will give a chance to the visitors to have an emotive space to experience the 2001 earthquake. The walls and floors of the museum have been built using the local stone of Kutch. News 18

A presentation will showcase Bhuj’s road to recovery post the 2001 earthquake, offer a  glance into the rich Harappan civilisation, the science of seismology, heritage, culture and art of the state.

In addition, 50 audio-visual models, holograms, interactive projection and virtual reality are some techniques that will enthrall visitors.

A digital flame can be lit by visitors as a homage to the earthquake victims which will be visible across Bhuj.

On 26 January, 2001, India was struck by one of the worst earthquakes in its history.

Gujarat’s Kutch district reported a powerful quake of 7.7 magnitude, which upended the lives of around 3.78 crore people.

Tens of thousands of people were killed and around 1.5 lakh others were injured due to the earthquake.

A trail of devastation was left behind as the powerful tremors dismantled residences, roads and buildings and hit communication. The quake was so strong that its aftershocks were felt for several days.

The World Health Organization (WHO) in its report noted that days after the earthquake, tents were erected that served as temporary health centres in Kutch. A public health lab was brought up in Bhuj to provide health services and monitor diseases. “This was rapidly followed by GIS-based disease surveillance as an early warning mechanism to prevent outbreaks,” the WHO said.

The District Hospital of Kutch, GK General Hospital, which was destroyed due to the strong tremors was restored by the Gujarat government by employing base isolation techniques, thus making it earthquake-resilient.

Narendra Modi, then chief minister of Gujarat, had vowed to rebuild and rehabilitate with the aim to attain the long-term goal of sustainable disaster-resilient development, the report added.

“Gujarat has a tradition and legacy on resilience considering the risk reduction initiatives in the recovery efforts from the Gujarat earthquake in 2001. The health care facilities in the State have been rebuilt as earthquake resilient,” Dr Roderico H Ofrin, WHO Country Representative to India, was cited by the United Nations (UN) health agency.

Japan’s Kobe Earthquake Memorial museum is constructed to tell the tales of the survivors of the 1995 earthquake that claimed 5,000 lives and destroyed tens of thousands of homes.

The museum provides a window into the post-earthquake scenario and the rehabilitation work.

The Earthquake museum, a part of Tulbagh museum in South Africa, depicts the lives of the locals who faced the 1969 earthquake through audio-visual presentations.