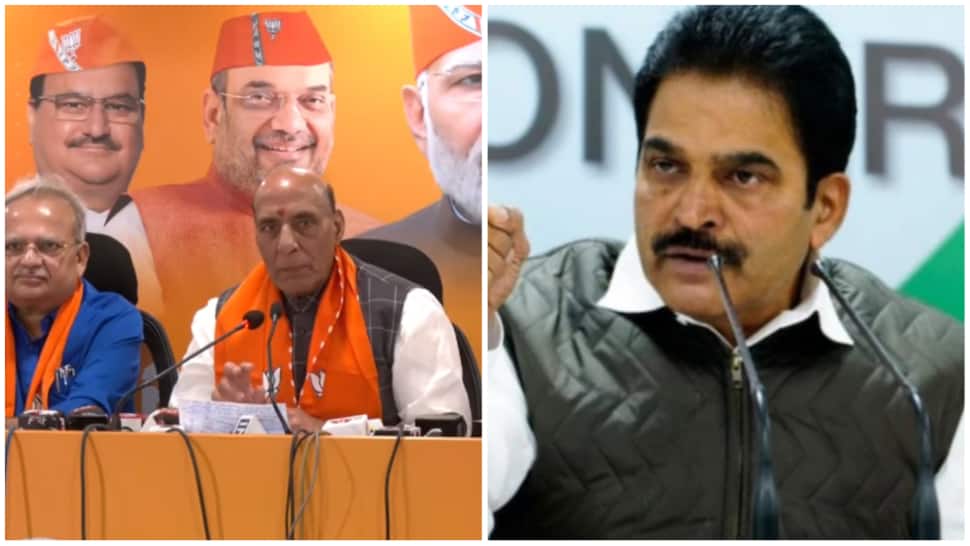 Ahmedabad: Bharatiya Janata Party (BJP) leader and Union Defence Minister Rajnath Singh on Wednesday said that Congress chief Mallikarjun Kharge’s “Ravan” remark against PM Modi reflects the mentality of the “entire Congress leadership”. Addressing a press conference here ahead of the first phase of polling for Gujarat Assembly elections on December 1, Singh said the people of Gujarat will give a befitting reply to those using abusive words for the prime minister who, he asserted, is Gujarat’s “honour and pride”. Replying to BJP leaders including Rajnath Singh, Congress General Secretary KC Venugopal said, “BJP leaders including Rajnath Singh are misleading the entire episode. Newspapers have reported it completely about what Congress chief Kharge said. He should read it and then comment.”

Newly elected Congress President Mallikarjun Kharge, who was addressing a public rally in Gujarat’s Ahemdabad compared PM Modi to ‘Ravan’ as he said, “he is visible in every election.” “Modi ji is the Prime Minister. Leaving work, he keeps on campaigning in Municipal Corporation elections, MLA elections, MP elections. All the time he talks about himself – ‘Don’t look at anyone, vote after seeing Modi’. How many times see your face? How many forms do you have? Does he have 100 faces like Ravana?,” Kharge said.

Also Read: Mallikarjun Kharge to PM Modi on end of scholarship to minorities: ‘How much will you earn?’

Interaction with Media in Ahmedabad, Gujarat.

Voting for 89 of 182 Assembly constituencies in Gujarat will be held on Thursday in the first phase. Singh said other opposition parties are also trying to level baseless allegations against the prime minister. Using abusive words for anyone does not reflect a healthy democracy, he said.

The BJP dubbed the remarks of Kharge an insult to the people of Gujarat. “The kind of words used by the Congress president for the prime minister is the reflection of the mentality of the entire Congress leadership and not just Kharge,” Singh said.

BJP leaders including Rajnath Singh are misleading the entire episode. Newspapers have reported it completely about what Congress chief Kharge said. He should read it and then comment: KC Venugopal, Gen Secy-Org, Congress pic.twitter.com/LeS7643fCk
— ANI (@ANI) November 30, 2022

The BJP veteran said the post of prime minister is an institution. “The PM’s post is not just a person, it is an institution. I am confident people of Gujarat will give a befitting reply to those who had used abusive words for the PM, who is Gujarat’s honour and pride,” Singh added.

Queried on BJP leaders using the word ‘Mauni Baba’ for former prime minister Manmohan Singh, the BJP leader said it is not a cuss word. “Mauni Baba is not a cuss word (gaali). Someone had used ‘Ravan’ and ‘Neech’ words (for PM). We never indulge in such things” he added.