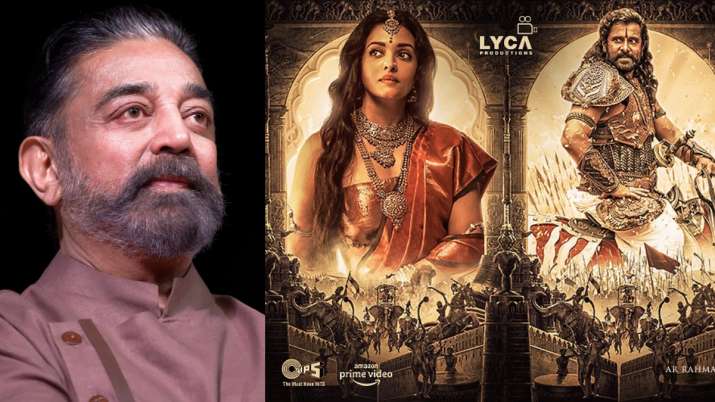 Ponniyin Selvan: The trailer launch event of Mani Ratnam’s historical drama was a huge success in Chennai. The chief guests for the evening were South veterans Rajinikanth and Kamal Haasan, who received a loud cheer from the crowd when they greeted each other with a hug. The two arrived at the venue in style. Haasan arrived at the venue in ethnic wear, while Rajinikanth opted to wear a shirt paired with a trouser. During the event, the Vikram actor made a huge revelation which took the audience and cast by surprise.

At the grand audio and trailer launch event of Ponniyin Selvan, Kamal Haasan said that not just Mani Ratnam, even he wanted to make such a film. Also, he revealed that he wished to cast Rajinikanth in it. “When I got the rights of Ponniyin Selvan, Sivaji also said that Rajinikanth would be perfect for Vandhiyathevan. I asked him ‘what about me?’, Sivaji said ‘you be Aditya Karikalan’,” Haasan said.

ALSO READ: Ponniyin Selvan 1 trailer video has best of Kollywood written all over it; netizens call it magnificent

The Tamil period drama is one of the most anticipated titles for various reasons. Not only does it boast a stellar cast but also high end VFX and AR Rahman’s music. Ponniyin Selvan’s trailer portrayed magnificent locations of the ancient era as the Cholas were seen fighting valiantly amid a power struggle in the 10th century. With picturesque destinations, bloody wars, and breathtaking grandeur, ‘Ponniyin Selvan’ looks no less than an absolute thrill fest.

In Mani Ratnam directorial, Aishwarya will be seen in dual roles. She will play queen Nandini, the princess of Pazhuvoor, who is on a mission to seek vengeance, as well as Mandakini Devi in the historical drama. Vikram will portray the role of Aditya Karikalan, Karthi will play Vanthiyathevan and Trisha will be seen as Kundavai and Ravi will portray the character of Arunmozhi Varman.

‘Ponniyin Selvan-Part 1’ is a cinematic adaptation of author Kalki Krishnamurthy’s Tamil novel of the same name which was released in the form of a series during the 1950s. The film is produced under the banner Madras Talkies and Lyca Productions. ALSO READ: Goodbye: Rashmika Mandanna recalls her first meeting with Amitabh Bachchan: ‘I went to him and…

The big-budget period film is all set to hit the theatres on September 30, in Hindi, Tamil, Telugu, Malayalam and Kannada.