Home Middle East Pope’s lack of apology over church’s role in residential schools was no... 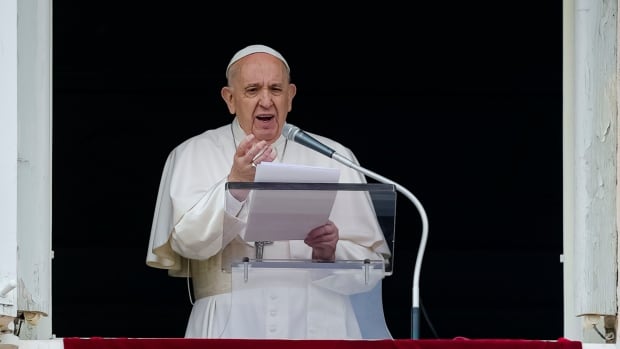 When Pope Francis stood on his balcony overlooking St. Peter’s Square on Sunday, he expressed “closeness to traumatized Canadians” over the discovery of what are believed to be the remains of an estimated 215 children buried on the grounds of a former Catholic-run residential school in Kamloops, B.C.

Yet many Canadians reacted in anger and disappointment that among the phrases spoken by the Pope, the word “sorry” was not included.

Vatican observers, however, were far from surprised. They say the lack of a formal apology from both the Pope and Canadian bishops as a group reflects an ongoing paralysis within the Vatican hierarchy over how to deal with the issue of abuse, along with a Canadian Conference of Catholic Bishops that one observer has called “tragically inadequate,” and liability concerns.

“[The Vatican hierarchy] are trying to convince themselves that they have done what they needed to do … and they spend 90 per cent of their capital in terms of authority and media in trying to stop the bleeding [of credibility],” said Massimo Faggioli, a Vatican observer and professor of historical theology at Villanova University in Pennsylvania.

“But they don’t understand that every single national or local case wants to have its own recognition and that the typology [of abuses] discovered in recent years, from the abuse of nuns to Kamloops, is far more complicated than the pedophile priest.”

This lack of understanding, say observers, led to tone-deaf responses.

Phil Fontaine, former national chief of the Assembly of First Nations and a residential school survivor, told CBC chief political correspondent Rosemary Barton that he strongly believes there should be an apology from the Pope and the Vatican for the Catholic Church’s role in running many of Canada’s residential schools. 9:40

Following the Pope’s comments on Sunday, Cardinal Thomas Collins, the archbishop of Toronto, told CBC that more important than a papal visit to Canada and an apology was “the day-to-day work, quietly, gently” that he said the Catholic Church has been carrying out alongside Indigenous people since the Catholic order in charge of the largest number of the residential schools, the Missionary Oblates of Mary Immaculate, apologized in 1991.

It’s an interpretation of events many Indigenous people, still waiting for all the school archives to be shared, take issue with.

Cardinal Michael Czerny, along with the other Canadian cardinal living in Rome, Marc Ouellet, met with the Pope separately on Saturday, likely to discuss the discovery at the former Kamloops Indian Residential School, say observers.

Despite a renewed push for a formal apology after the Tk’emlúps te Secwépemc First Nation announced the discovery, Czerny said Francis’s priority was to respond to “the pain, dismay and hurt” in Canada now.

Further apologies not ruled out

While Czerny did not rule out further apologies, the cardinal said it was up to the Canadian bishops to address the issue first and insisted that Francis’s blanket apology to the Indigenous peoples of the Americas made during a trip to Bolivia in 2015 covered Canada.

Still, Vatican observers say an apology from the Pope on Sunday in St. Peter’s Square, with no Indigenous people from Canada present, would have risked sounding off-the-cuff. And, they say, they believe that Francis, who has called for a “healthy decentralization” of the global church, is pushing the Catholic Church in Canada to properly address the situation that concerns primarily it.

“I think he wants the Canadian bishops to take responsibility, to be accountable,” said Iacopo Scaramuzzi, a Vatican expert and author of an upcoming book on sex and power abuse at the Vatican.

“Just 20 years ago, the Holy See was trying to convince Catholic politicians in Ireland to close these kinds of archives. Now you have a Pope pressing the local church to actually open the archives, which is a huge change in attitude, and in my opinion, the most important thing. Let the public know what happened.”

Minister of Crown-Indigenous Relations Carolyn Bennett told CBC’s chief political correspondent, Rosemary Barton, that she believes there are still documents on residential schools that should be released by the Catholic Church and presented to the National Centre for Truth and Reconciliation. 9:34

But concerns of liability could also be behind the reluctance of the Canadian bishops conference to apologize, a view expressed by former senator Murray Sinclair, who chaired the Truth and Reconciliation Commission, and shared by Vatican experts.

“My fear is that they’re listening to lawyers. And lawyers are telling them, if you [apologize], you will open a flood of lawsuits because you are implying that you are responsible,” said Faggioli.

“In my experience, whenever a clerical person in North America has to make a big decision, the first step is to ask lawyers. This is what I think is happening.”

Experts say it’s one thing taking legal action against the Catholic Church in Canada to access to archives, something Prime Minister Justin Trudeau hinted at last week, before stepping back from the suggestion. But it’s entirely another thing trying to force the Vatican to release documents relating to the archives.

Mario Caligiuri, a Rome-based lawyer for Rete Abuso, the Italian association of sex abuse victims of priests, said he is not aware of any cases in which the Vatican was legally obliged to release archives.

Given the Vatican is a separate sovereign state, a possible lawsuit to access documentation would be far from straightforward.

“If the Vatican has documents pertaining to the schools, it should share them with those who request to see them,” Caligiuri said. “But I’m not aware of any legal principles that give the right to another state to access them.”

The Vatican likely has correspondence between Canadian bishops, apostolic nuncios (Vatican diplomats) and the Vatican in its archive, but Scaramuzzi said the main archives for the schools will be in Canada, as they were in Ireland for the church-run penitentiary workhouses there, where systematic abuse against women occurred.

While the pressure grows from Canada for the Pope to apologize and the Canadian church to fully co-operate, last week, the strongest condemnation from within the Catholic Church of its mishandling of its abuse crisis came from its highest ranks. A resignation letter was sent to the Pope by Cardinal Reinhard Marx, a leading figure in the German Catholic Church and one of Francis’s strongest allies.

Marx, who is not accused of abuse, wrote that he was resigning as a way to take personal and institutional responsibility “for the catastrophe of the sexual abuse by church officials” and the “dead end” the Catholic Church finds itself in over their handling of the issue.

While Marx’s letter was addressing the sex abuse crisis in Germany, observers say it shines a stark light on a Vatican hierarchy that remains woefully inadequate in its response to the crisis that has plagued it for decades in many countries — paralysed by fear that the calls for apologies for their past crimes and abuses will never end.

The shocking discovery in Kamloops, said Faggioli, is the latest.

“They don’t know what else to do because the only thing that could assuage the anger would be for the Pope to go to Canada and apologize,” he said.

“And you know what happens the day after they announce that? Australia and Africa and every place else wants an apology, too. So when do you stop? The problem is, as they see it, it’s never enough.”

Support is available for anyone affected by their experience at residential schools and those who are triggered by the latest reports.

A national Indian Residential School Crisis Line has been set up to provide support for former students and those affected. People can access emotional and crisis referral services by calling the 24-hour national crisis line: 1-866-925-4419.