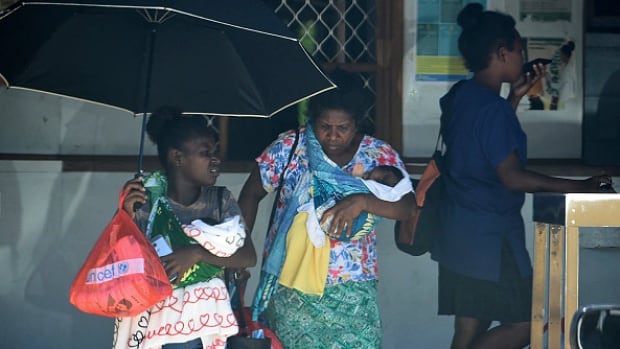 There were no immediate reports of widespread damage or injuries, although Australia’s prime minister said a roof at its High Commission had collapsed. An initial tsunami warning was withdrawn after the threat passed.

Solomon Islands government spokesperson George Herming said he was in his office on the second floor of a building in the capital, Honiara, when the quake rocked the city. He said he crawled underneath his table.

“It’s a huge one that just shocked everybody,” Herming said.

“We have tables and desks, books and everything scattered all over the place as a result of the earthquake, but there’s no major damage to structure or buildings,” he said.

Herming said the Solomon Islands, which is home to about 700,000 people, doesn’t have any big high-rises that might be vulnerable to a quake. He said there was some panic around the town and traffic jams as everybody tried to drive to higher ground.

“There are no known injuries but the roof of the High Commission annex has collapsed, which would point to likely damage throughout the city,” Albanese told Parliament.

“Staff have been moved to higher ground because there was a tsunami warning that was issued. Our High Commission is seeking to confirm the safety of all Australians in the Solomons. There are difficulties because phone lines have gone down. So there are communication difficulties there,” Albanese added.

Freelance journalist Charley Piringi said he was standing outside near schools on the outskirts of Honiara when the quake sent the children running.

“The earthquake rocked the place,” he said. “It was a huge one. We were all shocked, and everyone is running everywhere.”

Honiara International Airport suffered damage to its ceiling but the building was intact, a Solomon Islands Airline worker at the airport told Reuters by phone.

Aftershocks continue to be felt, he said, declining to be named as he is not authorized to speak publicly. Airport staff would continue working but the damaged section of the airport terminal was closed to passengers.

The Solomon Times newspaper reported power had been cut for most of Honiara, as preliminary assessments of damage to power lines are made.

The quake’s epicentre was in the ocean about 56 kilometres southwest of Honiara at a depth of 13 kilometres, according to the U.S. Geological Survey.

The Pacific Tsunami Warning Center initially warned of possible hazardous waves for the region but later downgraded a tsunami warning as the threat passed.

The Solomon Islands sits on the Pacific Ring of Fire, an arc along the Pacific Ocean rim where many volcanic eruptions and earthquakes occur.