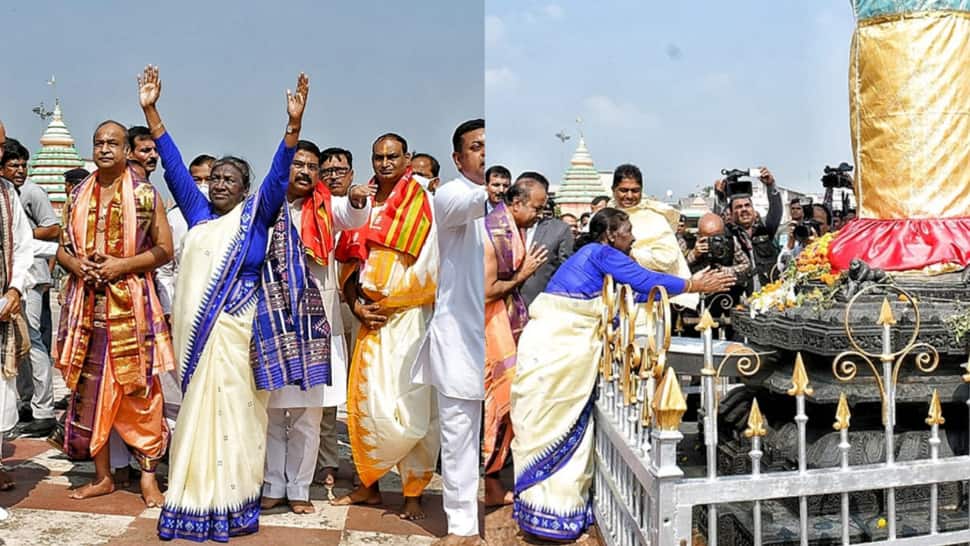 New Delhi: President Droupadi Murmu on Thursday (November 10, 2022) walked about two kilometers on the Grand Road in Odisha’s Puri to the 12th century Lord Jagannath Temple and offered prayers for the wellbeing of the nation. Murmu, who hails from a tribal community in Odisha’s Mayurbhanj district, touched the Aruna Stambha, the 16-sided 34 feet tall monolithic chlorite stone pillar in front of the Lion’s Gate (Singhadwara) of the temple, and knelt down before the gate. She also knelt down before the sibling deities Lord Jagannath, Devi Subhadra and Lord Balaram in the sanctum sanctorum in obeisance.

President Murmu, who started her two-day visit to Odisha from Bhubaneswar earlier in the day, surprised the security personnel accompanying her as she stopped her carcade at Balagandi Chhak and walked down to the temple like a common devotee. She kept both her hands raised invoking Lord Jagannath and also waved to hundreds of people who had lined up on both sides of the road. The temple was closed to the common people from 10.30 AM to 1 PM in view of Murmu’s visit.

In a rare gesture, President Droupadi Murmu walked about two kilometers to seek the blessings of Lord Jagannath at Puri. Devotees greeted the President on her way to the temple. pic.twitter.com/b6C8IQQZnr
— President of India (@rashtrapatibhvn) November 10, 2022

This was her first visit to her home state as the President of India.

On the way to the temple, Murmu, who had worked as a teacher in the 1990s, also reached out to the students of Utkal Hindi Vidyalaya waiting on the side of the Grand Road and mingled with them and their teachers.

On her arrival at the Lion’s Gate, the president was welcomed by Gajapati Maharaja Dibya Singh Deb of Puri, the priests and government officers. Deb presented a Patachitra painting to her on behalf of the temple.

“You are the first servitor of Lord Jagannath and are the living God,” Murmu told Gajapati Maharaj when he appeared uncomfortable for being told ‘Namaste’ by the president.

Murmu knelt down at the Lion’s Gate as a mark of respect to the deity and entered the shrine after properly washing her feet like common devotees.

She touched all the 22 steps leading to the temple with her hands as a sign of her devotion to the deities.

She also partook of the Mahaprasad of Sri Jagannath Temple.

Murmu, who was accompanied by her daughter Itishree, also offered a ‘Tulsi’ garland to Lord Jagannath, another made of lotus at the Mahalaxmi temple and another of hibiscus flowers at the Maa Bimala temple.

“I feel fortunate for having darshan of Chaturdha Murti and gods and goddesses in the temple premises. I feel a rare bliss for having prayed to Lord Jagannath, who is the presiding deity of all Odias. Mahaprabhu is the ‘daru devata’ (god in tree wood) of tribals and God of the entire world. I pray before Him for the well being of the entire human kind. Let our country reach the peak of prosperity and development by the grace of Lord Jaganath. This is my wish,” she wrote in Odia in the register book maintained by her family priest

While leaving the temple, President Murmu garlanded the statue of Utkalmani Gopa Bandhu Das near the Lion’s Gate. It was installed by Mahatma Gandhi in 1934.

Earlier in the day, on her arrival at the Bhubaneswar airport, she was welcomed by Odisha Governor Ganeshi Lal and Chief Minister Naveen Patnaik.

The President was accorded a guard of honour on her first visit to Odisha.

On Friday, she is scheduled to visit Tapoban High School, Government Girls High School Unit-II and Kuntala Kumari Sabat Adivasi Girls Hostel Unit-II in Bhubaneswar and interact with students and teachers. She will also launch various projects of the Union Ministry of Education from Jayadev Bhawan, Bhubaneswar.