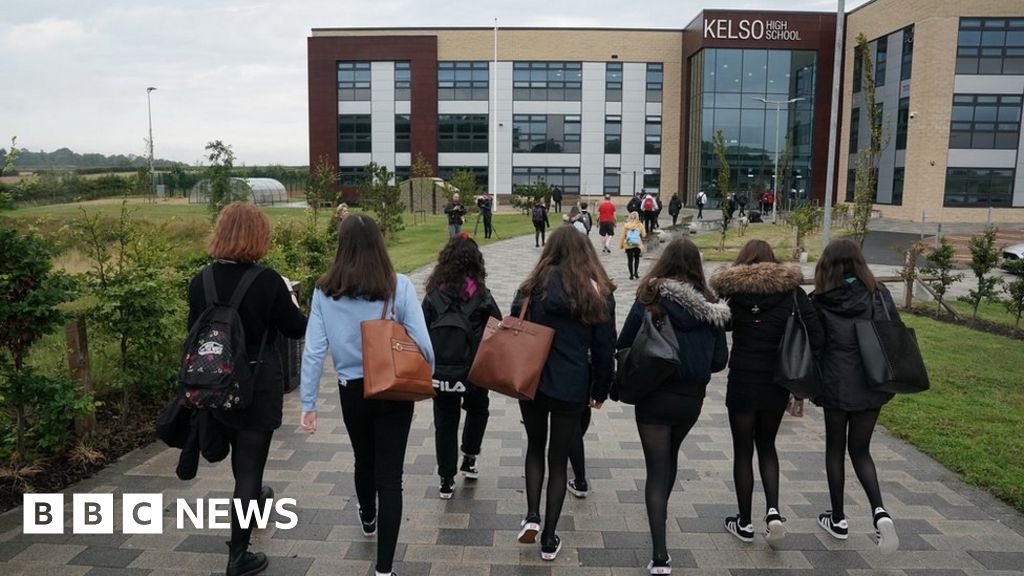 Scotland’s pupils have returned to classes for the first time since lockdown began nearly five months ago.

Borders and Shetland schools are the first to reopen with most others following on Wednesday.

Physical distancing among students will not generally be required but hygiene and safety measures such as one-way systems have been put in place.

Except for children of key workers, most of the country’s 700,000 pupils have not been in class since 20 March.

While councils have been given some flexibility over the back to school timetable, the Scottish government wants all schools fully open by 18 August.

All age groups returned in the Scottish Borders on Tuesday – a week earlier than the normal start of term – but most councils have opted for a phased approach, for instance by having youngest pupils return first.

While there is no requirement for physical distancing between pupils, teachers should remain 2m apart from students or other adults.

Older secondary pupils are also being encouraged to maintain distancing where possible if this does not hinder the return to full-time learning.

There is no general requirement to wear face coverings although staff and pupils can do so voluntarily.

School buses are treated as part of the school building, so normal distancing or face covering rules do not apply to pupils, but they will have to sanitise their hands prior to boarding.

At her coronavirus briefing on Monday, First Minister Nicola Sturgeon acknowledged that some teachers, parents and pupils would feel anxious, but said the guidance was carefully worked through and informed by scientific advice.

“Schools have worked really hard to support pupils through lockdown but we know the impact on education, on wellbeing, on happiness has been negative for young people so to get them back into full-time education has to be a priority,” she said.

How have schools prepared for pupils’ return?

Kelso High School in the Scottish Borders is one of the first in the country to welcome pupils back to full-time learning.

Head teacher Jill Lothian says for young people, it’s the procedures rather than the building itself that have changed most.

She said there were different entry and exit points and the school is trying to limit the amount of time pupils are moving around the building. It is also attempting to keep them apart as much as possible.

“There’s a bit of anxiety but that’s what we’re her for ensure that they get into the routines that are expected as we get them round the school.”

Every classroom is equipped with sanitiser and a cleaning station for pupils to wipe down their desks and chairs.

One-way systems are in place and pupils will be encouraged to spend break times outdoors, with controls to ensure they do not all leave the building at the same time.

Shona Haslam, leader of Scottish Borders Council, believes the council has done everything it can to make the return to school as safe as possible

“Additional cleaning, additional ventilation, children not walking around the school quite so much, one-way systems in place, school transport being an extension of the school estate – we’ve done all of those measures that are in the Scottish government guidance and we are as confident as we can be,” she said.

At Inverclyde Academy in Greenock, the school’s fresh cohort of S1 pupils will be the first to encounter the new normal of schooling when they arrive on Wednesday, with other year groups returning in the following days.

There will be no sharing of equipment such as stationery or headphones. They can bring equipment from home but there is no need as individual stationery packs and calculators will be issued.

Desks and seating have been arranged so that pupils are facing the front of the classroom and not each other. They can sit in pairs with a “shoulder partner” but there is a strict seating plan to keep students in “bubbles”, limiting the number of close contacts.

Head teacher Denise Crawford said there would be designated areas outside and in the cafeteria so year groups stay within their groups.

The teacher’s workstation is a measured 2m distance from the desks. A teacher is allowed to approach a child to give them individual help, but such contact must be kept to a minimum and for a maximum of 15 minutes.

New Inverclyde Academy first year Emily,12, said she can’t wait to see her friends again when she starts back at on Wednesday.

“We’ve not seen each other for so long, we’ll be so happy to see each other,” she said. “It will just be great.”

Layla, 11, thinks there will be some catching up to do.

She said: “I’m quite good at English and things and I don’t think I’ve missed too much on that because I’m quite confident but definitely maths, I’ll need to revise some things.”

S5 pupil Eddy has found it difficult to motivate himself during lockdown but has some concerns about the return to school and the possible spread of Covid-19.

“I’ve got my gran who is in shielding. I need to keep her safe,” he said “That’s what I’m worried about.”

Rachel, 15, is concerned she will not be fully prepared for her higher exams next year.

“I think because we haven’t sat the exams in fourth year, that going into fifth year and then sitting highers will be a bit of a shock,” she said. “I don’t know how I’m going to cope with it.”

Andrew, 12, is looking forward to some much-missed social interaction.

“During lockdown we were communicating but eventually there was just nothing to talk about because nothing was happening,” he said. “I hope we’ll be able to talk about something other than Covid once we get back into school.”

How do you feel about your child returning to school today? Please share your thoughts by emailing haveyoursay@bbc.co.uk.