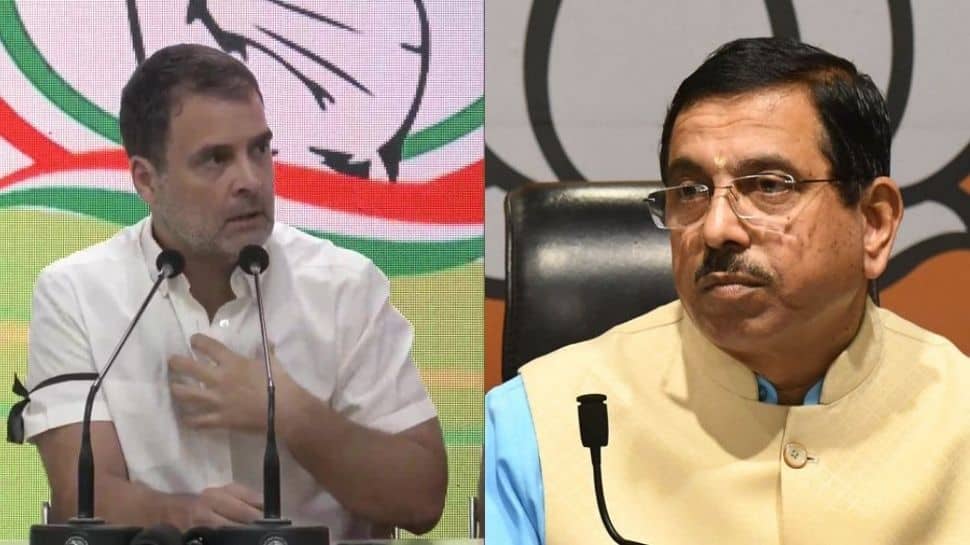 New Delhi: After Congress leader Rahul Gandhi held a press conference at the party headquarters in the national capital on Friday (August 5, 2022) and said that “Gandhi is not just a family, but a whole ideology”, Union Minister Pralhad Joshi in a counter-attack said that “he is not a descendant of Mahatma Gandhi. He is a ‘nakli’ (fake) Gandhi. And it is a fake ideology.”

During the press conference, Congress MP Rahul Gandhi said that Gandhi is not just a family, but a whole ideology.

“Why do they attack the Gandhi family? They do it because we fight for an ideology & there are crores of people like us. We fight for democracy, for communal harmony and we have been doing this for years. It’s not just me who did that, it has been happening for years,” Rahul Gandhi said.

He (Rahul Gandhi) is not a descendant of Mahatma Gandhi. He is a ‘nakli’ (fake) Gandhi. And it is a fake ideology: Union Minister Pralhad Joshi on Congress MP Rahul Gandhi’s remark that Gandhi is not just a family, but a whole ideology pic.twitter.com/8wigs30Hef
— ANI (@ANI) August 5, 2022

“My family sacrificed their lives. It’s our responsibility because we fight for this ideology. It hurts us when Hindus-Muslims are pitted against each other,when Dalits are killed,when a woman is thrashed. So, we fight. This isn’t just one family, this is an ideology,” he added.

The Congress leader also attacked the BJP government at the Centre by calling their leader ‘Hitler’. “Hitler had also won elections, he too used to win elections. How did he use to do it? He had control of all of Germany’s institutions…Give me the entire system, then I will show you how elections are won,” said Congress MP.