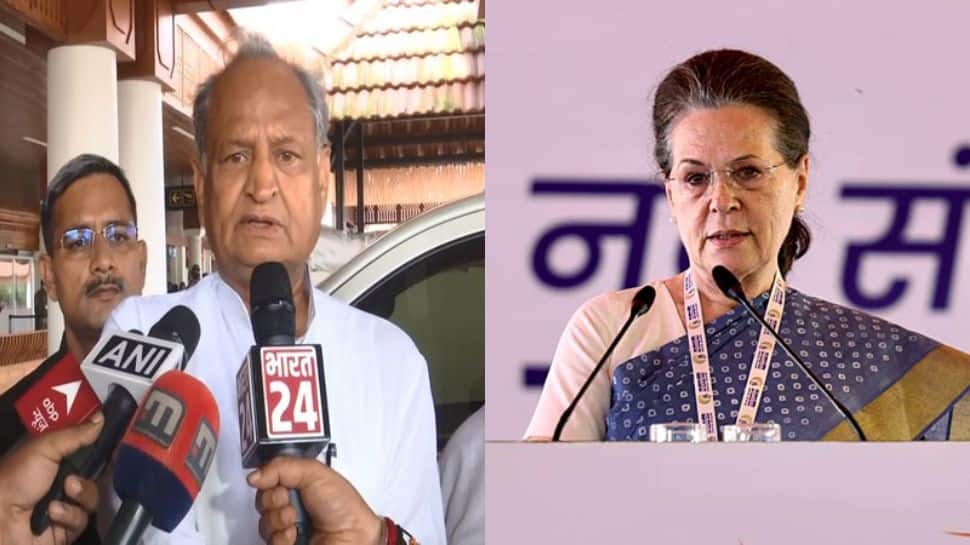 Jaipur: Rajasthan Chief Minister Ashok Gehlot is likely to meet Congress interim president Sonia Gandhi in Delhi on Wednesday afternoon following the rebellion by his party lawmakers in the state, in the run-up to the Congress presidential poll. Rajasthan Minister Pratap Khachariyawas said today that Gehlot who is arriving in the national capital today and will meet Sonia Gandhi. Congress is currently grappling with the political crisis in the state over leadership change after Gehlot emerged as the top contender in the party`s presidential polls for which the process of the nomination has already begun. The party had issued notices to three loyalists of Ashok Gehlot over their actions in the political crisis in Rajasthan.

However, the chief minister was not named for disciplinary action in the report. The show cause notices have been issued to Rajasthan Tourism Development Corporation (RTDC) Chairman Dharmendra Rathore, the party`s chief whip Mahesh Joshi, and Parliamentary Affairs Minister Shanti Dhariwal.

AICC in-charge Ajay Maken and Mallikarjun Kharge had earlier submitted a written report to Sonia Gandhi that disciplinary action should be taken against the three Gehlot loyalists. Maken and Kharge, who were appointed observers for the meeting of the Congress Legislature Party had to return from Jaipur after they could not meet MLAs individually to ascertain their views. A “parallel meeting” was held by the loyalists of Ashok Gehlot who are opposed to Sachin Pilot being elevated to the post of the chief minister. Maken termed the “parallel meeting” as indiscipline and did not agree to other demands of the MLAs and ministers seen close to Gehlot.

On Tuesday, Gehlot held an informal meeting with a few ministers and party MLAs at his residence in Jaipur, sources said. They said Forest and Environment Minister Sukhram Bishnoi, Minister of State for Home Rajendra Yadav, Minorities Minister Saleh Mohammad, Sports Minister Ashok Chandna and MLAs Madan Prajapat, Rafiq Khan, Amin Kagzi, Khushveer Jojawar, Amit Chachan, Jagdish Jangid were present in the meeting. Sachin Pilot, a former Deputy Chief Minister of the State has also come to Delhi. The nomination process for election to Congress next president will continue till September 30 and the election results will be declared on October 19. Amid the crisis, some other names apart from Gehlot have emerged as possible presidential candidates.