Rajasthan Political Crisis LIVE Updates: Former deputy chief minister Sachin Pilot, who engineered a rebellion against the Ashok Gehlot government with 18 more MLAs, late last night tweeted that he stood firm “in my belief & will continue working for a better India, to deliver on promises made to the people of Rajasthan & protect democratic values we cherish” after returning to the party fold post a month-long political crisis in the state. Thanking interim chief Sonia Gandhi as well as Rahul Gandhi and Priyanka Gandhi Vadra, Pilot’s tweet came hours after the Congress said Pilot will work in the “interest of the Congress” and a three-member committee will be set up to address the grievances expressed by him and other aggrieved MLAs, signalling an “amicable resolution” of nearly a month-long Rajasthan crisis ahead of the crucial assembly session from August 14.

The meeting between Rahul Gandhi and Pilot at the former party chief’s residence, where Priyanka Gandhi Vadra was also present, lasted two hours during which they had a “frank, open and conclusive” discussion. While the Congress did not give details of what transpired in the Rahul-Pilot meeting, AICC general secretary (Organisation) KC Venugopal said in a statement that following the meeting, Sonia Gandhi has decided that the AICC will constitute a three-member committee to “address the issues raised by Pilot and the aggrieved MLAs and arrive at an appropriate resolution thereof”. “Shri Sachin Pilot has committed to working in the interest of the Congress party and the Congress government in Rajasthan,” it added. On his part, Pilot said, “We raised issues of principles before the Congress leadership, and welcome their assurance of a time-bound redressal of our grievances.”

CM Gehlot to Meet MLAs Staying at Jaisalmer Hotel | Rajasthan CM Ashok Gehlot will reach Suryagarh Hotel in Jaisalmer on Tuesday morning to meet the MLAs from his faction staying there. The meet has been organised to explain the party high command’s decision to the MLAs. Sources said, It is being the MLAs who are supporters of Ashok Gehlot are angry with the recent decision.

Rebel Congress MLA Says Rajasthan Govt is Safe | Congress MLA loyal to Rajasthan leader Sachin Pilot said the Ashok Gehlot-led government is safe in the state, hours after the now-sacked deputy chief minister met Rahul Gandhi and Priyanka Gandhi to work out a truce. “The Rajasthan government is safe,” said Bhanwar Lal Sharma. Sharma is one of the 18 legislators who backed Pilot in the power tussle with Chief Minister Ashok Gehlot.

“I thank Sonia ji, Rahul ji, Priyanka Gandhi ji & Congress leaders for noting and addressing our grievances. I stand firm in my belief  and will continue working for a better India, to deliver on promises made to people of Rajasthan and protect democratic values we cherish,” Sachin Pilot said after the meeting ended. 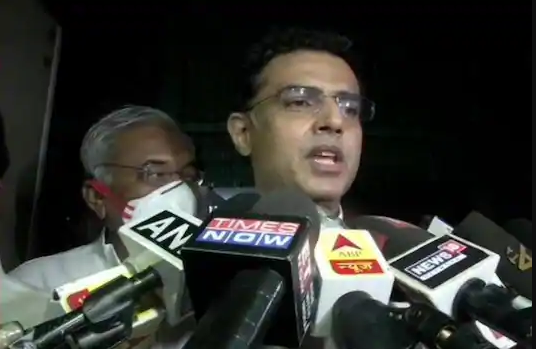 RECAP (2/2) | Soon after his patch-up talks with senior Congress leaders, Sachin Pilot on Monday night said he has never hankered after posts and his was a fight for principles. Pilot, who made his first public appearance since his revolt against Rajasthan Chief Minister Ashok Gehlot a month ago, said he and the other MLAs raised organisational issues, the case of sedition filed by the SOG, and the style of governance in the state, and expressed the hope that the grievances will be addressed soon. READ MORE

RECAP (1/2) | Sachin Pilot has decided to work in the interest of the Congres party and a three-member committee will be set up to address the grievances expressed by him, the party high command said on Monday after a meeting between the rebel leader and former party chief Rahul Gandhi.

This signaled an amicable resolution of nearly a month-long Rajasthan crisis ahead of the crucial assembly session from August 14. The meeting between Rahul Gandhi and Pilot at the former party chief’s residence, where Priyanka Gandhi Vadra was also present, lasted two hours. READ MORE