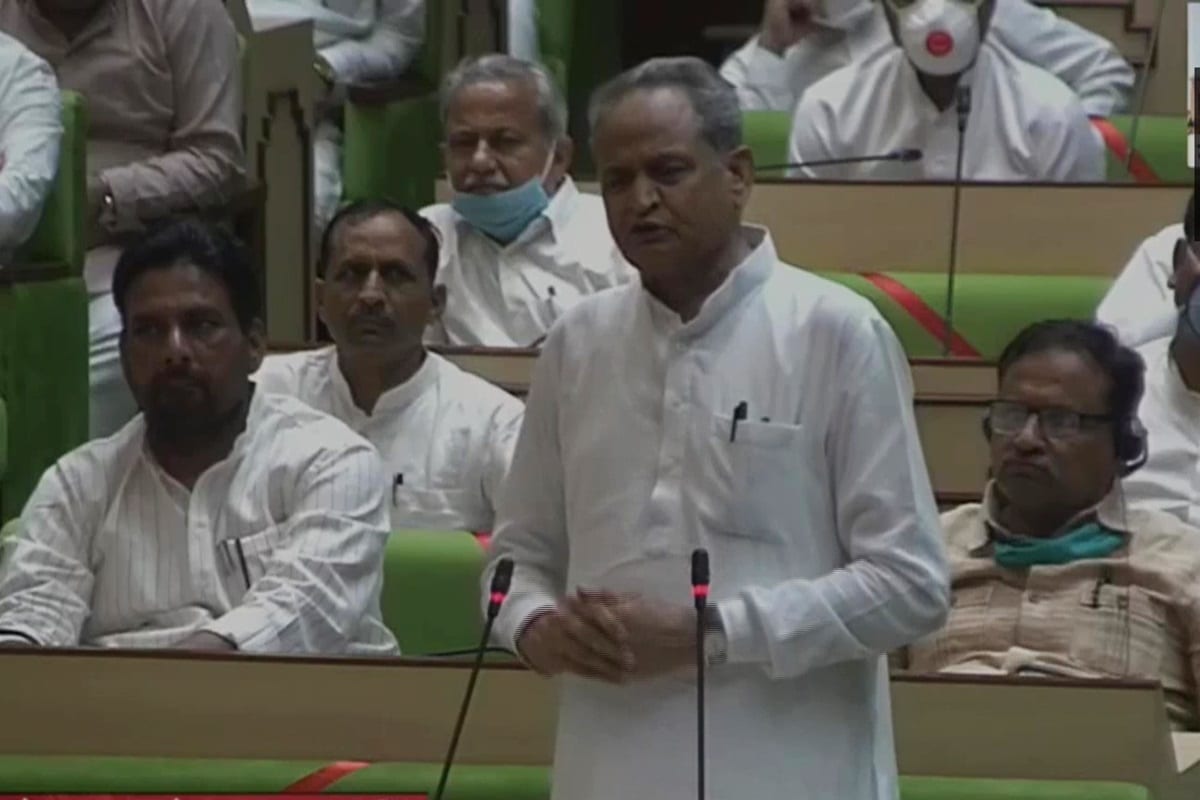 Rajasthan CM Ashok Gehlot speaks in the Assembly during the debate on Friday. (Twitter/ANI)

Responding with a scathing counter-attack to the charges levelled against his government by BJP leaders, Rajasthan Chief Minister Ashok Gehlot on Friday said he will not let his government fall at any cost.

Responding with a scathing counter-attack to the charges levelled against his government by BJP leaders, Rajasthan Chief Minister Ashok Gehlot on Friday said he will not let his government fall at any cost.

“Try hard as your leaders may, I will not, at any cost, let this government fall. You [BJP are flustered] that we have resolved our differences and are standing united today. Your dreams of toppling this government, I’ll never allow to be realised,” Gehlot said in the Assembly during the debate on the trust motion, which the Congress won by a huge margin through voice vote.

Gehlot accused the BJP of trying to replicate what it allegedly did in Madhya Pradesh.

“But at what cost? You [BJP] toppled the government in Madhya Pradesh. And in the middle of the outbreak of the pandemic, the new chief minister took oath. People were taking out political rallies. And coronavirus, as expected, went out of the state’s control. The BJP wanted to do something similar in Rajasthan,” he claimed.

Echoing statements made by Sachin Pilot in the Assembly earlier in the day, Gehlot told BJP leaders that they should not interfere in the affairs of another party.

“I’m 69 years old. I have been doing politics for the last 50 years. I have been a Union Cabinet minister thrice, I have been PCC chief thrice, three times I have served as the general secretary of the AICC. And it is for the third time that I have become chief minister of the state. And I am worried today. And not just I, many of you must also be worried,” Gehlot said about the state of democracy in the country.

“The statement made by Kailash Meghwal [the MLA, senior BJP leader and former Speaker of Rajasthan Legislative Assembly had on Thursday termed the alleged attempts to topple Rajasthan government as unfortunate] was welcomed by everybody. Attempts were made to topple Bhairon Singh Shekhawat’s government when he was away in the US to seek treatment. I [as PCC chief] went to the President and told him I will not be a party to this,” Gehlot said recounting an incident during the tenure of BJP leader and the then Chief Minister Bhairon Singh Shekhawat.

“I was the person, when Bhairon Singh Shekhawat’s BJP was reduced to 32, and I had brought up Congress to 156, went first to Shekhawatji’s house to seek his blessings. My entire cabinet was with me. I told him three things,” said Gehlot. “You should take rest, your security cover will not be reduced and if ever, since you already have health issues, you feel any unease, let me know, I’ll ensure you get the best of medical treatment. We used to sit and chat with each other over tea. Such were the relations between leaders of ideologically opposed parties in Rajasthan once.”

Gehlot also commented on the controversy after Rajasthan Governor Kalraj Mishra refused to grant permission to convene the Assembly after the state cabinet forwarded him such a proposal.

“When a state cabinet wishes to have an Assembly session, all that is required is a simple cabinet approval. The approval in a file goes to the Governor’s office and comes out with his approval. The Governor has no other right,” said Gehlot. “But what the Governor did in our case, whether it was due to the pressure exerted by your party on him, he, who commanded respect across party lines, did not do the right thing. Hundreds of editorials were written against him, why?”

Sachin Pilot Says ‘All MLAs Are Together’, Gehlot Says ‘Democracy Is In Danger’ | CNN News18

Gehlot also castigated BJP leaders for making adverse comments on the fight of the state government against coronavirus.

“I’m particularly disappointed over the comments made by you on the subject of our fight against the novel coronavirus. You should have at least listened to the Prime Minister who himself praised Rajasthan’s work in this field. We did not go around promoting our ‘Bhilwara model’, it gained national recognition on its own,” said Gehlot.