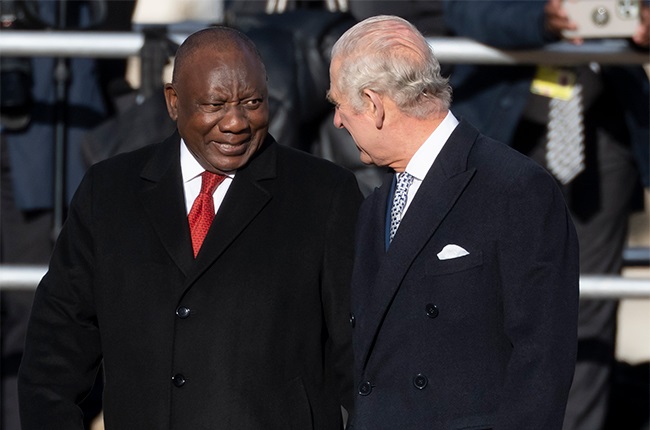 South African president Cyril Ramaphosa landed in the UK on Monday for King Charles’ first state visit, which will conclude on Thursday.

Gun salutes were fired across London as Charles and Queen Camilla were joined by heir to the throne, Prince William and his wife Catherine, to greet Ramaphosa for a ceremonial welcome at Horse Guards Parade Tuesday.

The monarch and Ramaphosa, both dressed in dark overcoats against the November chill, inspected the guard of honour together.

In a carriage procession escorted by mounted soldiers from the Household Cavalry, the parties then travelled to Buckingham Palace.

The two-day visit sees Charles finally presiding over proceedings after decades of playing a supporting role to his mother, Elizabeth II, who died in September.

The State Visit Carriage Procession, made up of the President of South Africa, The King, The Queen Consort, and The Prince and Princess of Wales, arrives at Buckingham Palace. ?? pic.twitter.com/JMTkZ0dy3E

Ahead of a speech given by the South African president to the UK Parliament, Ramaphosa and the royals toured nearby Westminster Abbey, including a memorial stone for Mandela, who served as president of South Africa between 1994 and 1999.

Afterwards, he went on to a state banquet hosted by Charles at Buckingham Palace.

Foreign Secretary James Cleverly said the choice of Ramaphosa for Charles’s first state visit was a sign of the UK’s “enduring commitment” to Africa, even as it eyes new partners in Asia post-Brexit.

For Ramaphosa, a protege of anti-apartheid icon Nelson Mandela, however, it comes amid an energy crisis and political difficulties, with a threat of impeachment at home after accusations of of concealing a multimillion-dollar cash theft.

Addressing UK parliamentarians in the ornate Royal Gallery of the Palace of Westminster, Ramaphosa nodded at the corruption endemic in his country – including, for his critics, in the Presidency itself.

He said his government was striving “to rebuild our economy in the wake of the pandemic and the era of state capture”, as he urged the UK government to admit more South African students ahead of talks Wednesday with British Prime Minister Rishi Sunak.

Following the recent COP27 climate meeting in Egypt, Ramaphosa said an agreement to create a fund for poor and developing nations needed to be turned into cash.

“This should not be seen as charity,” he said.

“It is compensation for the harm done – and the harm yet to be done – to people in developing economies as a consequence of the industrialisation that wealthy countries have had over many years.”

The king, long known for his advocacy on issues relating to the climate, said, “we must find and implement practical solutions to the twin, existential threats of climate change and biodiversity loss”.

At the start of the visit, the UK and South African governments announced the launch of the next phase of the “UK-South Africa Infrastructure Partnership”.

“South Africa is already the UK’s biggest trading partner on the continent, and we have ambitious plans to turbocharge infrastructure investment and economic growth together,” Sunak said.

Trade with South Africa, the continent’s second-biggest economy, is worth £10.7 billion ($12.7 billion) annually.

“Avuxeni, Dumela, Sawubona, Molo, Molweny, Ndaa. My wife and I are delighted to welcome you to Buckingham Palace this evening,” Charles began his speech Wednesday evening as the day concluded at the state banquet.

“South Africa, like the Commonwealth, has always been a part of my life. My mother often recalled her visit in 1947, the year before I was born, when, from Cape Town on her twenty-first birthday, she pledged her life to the service of the people of the Commonwealth. It is therefore particularly moving and special that you are our guest on this, the first state visit we have hosted.”

Charles spoke fondly of the South African presidents past who the queen met with, including Mandela, Mbeki and Zuma. “On each of those occasions, she expressed her admiration for your country and its people, its vibrancy, natural beauty and diversity,” he said.

“And she always talked warmly of her return to your country in 1995, as the guest of President Mandela, after the momentous events – driven from within South Africa and supported by so many around the world, including here in the United Kingdom – that brought democracy to your country.”

“During one of my own visits to South Africa, in 1997, President Mandela told me that he had conferred on my mother a special name – Motlalepula, meaning “to come with rain”. I have been reassured that this was a mark of the particular affection President Mandela felt for the queen… rather than a remark on the British habit of taking our weather with us!”

Charles went on to speak of the UK’s relationship with South Africa, acknowledging: “While there are elements of that history which provoke profound sorrow, it is essential that we seek to understand them.  As I said to Commonwealth leaders earlier this year, we must acknowledge the wrongs which have shaped our past if we are to unlock the power of our common future.”

“Mr. President, your visit offers an opportunity for us to chart a path forward together, investing in each other’s potential, and facing the challenges of our world together, as partners, and as friends, striving for equality, justice and fairness for all. At the turn of the year the world paid tribute to the life and legacy of a great South African, former Archbishop Desmond Tutu. Amongst his many memorable teachings, I am often reminded of one saying in particular – ‘My humanity is bound up in yours, for we can only be human together.’ I believe that is a vital lesson for us all, and an important thread in the partnership between our countries.”

He concluded: “Ladies and gentlemen, as we commit to continuing on that journey, I invite you all to rise and drink a toast to President Ramaphosa, and to the people of South Africa. Nkosi Sikelel’ iAfrika.”