Home Entertainment Movie Masala Rashmika Mandanna to star opposite Jr. NTR in NTR30? See what we... 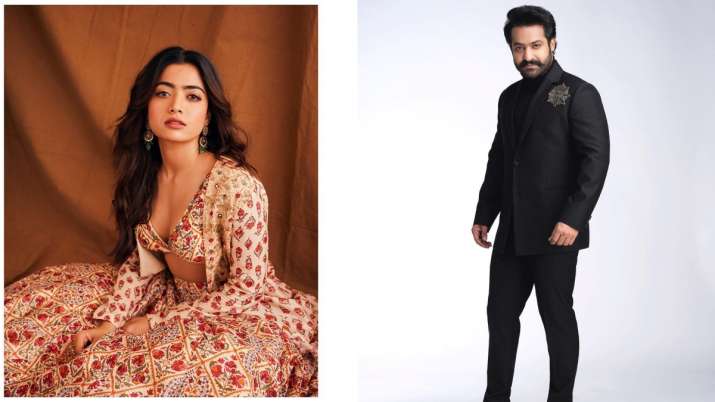 The national crush, Rashmika Mandanna has been speculated to be seen sharing the screen with Jr. NTR in his next upcoming film NTR30. Directed by Koratala Siva, NTR30 will mark the actor’s 30th movie in the industry. According to the reports, the shooting of the film is getting delayed due to various reasons. Over the past few months, there were rumours about the lead actress in the movie.

As per the reports, Rashmika has been approached for the lead role and has been offered a whopping amount of Rs. 5 crores for the film. While there has been no confirmation on the same yet but fans seem really excited to see them together in a film.  Earlier it was also rumoured that Bollywood actress Alia Bhatt was offered the lead role but she did not accept the offer due to her pregnancy.

Earlier, in an interview with Cinema Express, Alia Bhatt indirectly hinted at being approached for NTR30. She said, “I wouldn’t want to comment on it now, but I am excited to do more films in Telugu. I had a lovely time working with Tarak (Jr NTR in RRR). Even the director that I’m currently talking to (Koratala Siva) is someone who has done some great work till now”.

Also Read: Yash slays in new photoshoot, says ‘I possess the White, I own the Dark’

Jr NTR and Alia Bhatt have earlier worked together in S S Rajamouli’s RRR. Alia Bhatt was paired opposite Ram Charan in the film. RRR was a massive success at the box office and broke several records. The film earned more than 1000 crores worldwide. As per reports, Jr NTR will undergo massive body transformation for the role in NTR30. The actor is expected to shed a few kilos

Jr. NTR and Koratala Siva earlier worked in 2016’s superhit film ‘Janatha Garage’. NTR30 will be the duo’s second project together. Well, after the blockbuster hit of RRR, fans seem really eager to watch their favourite superstar Jr. NTR again on the big screen. Additionally, with the rumoured new pairing the level of curiosity has been to the next level.