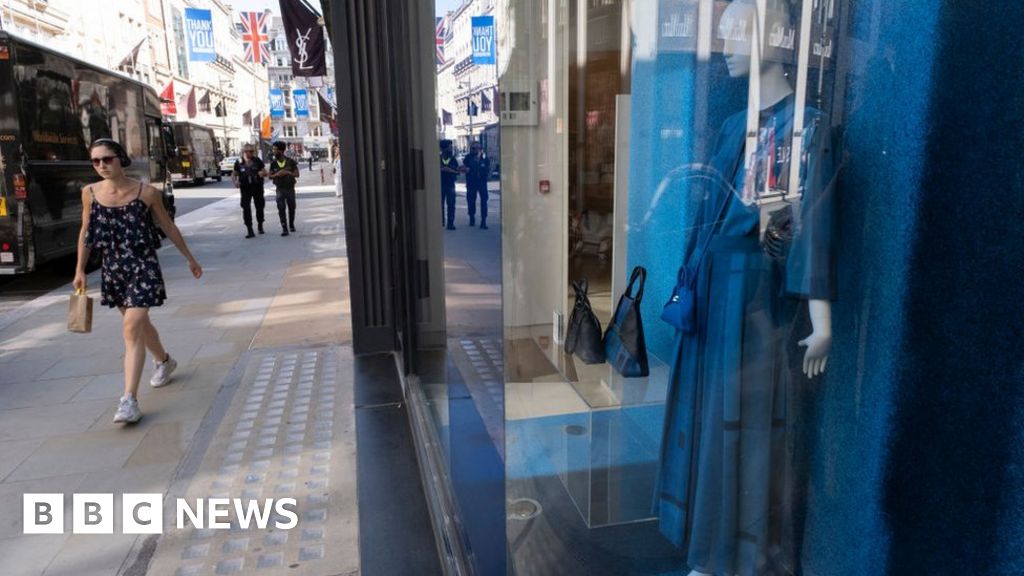 They show the number of visits to High Streets is still down significantly as people shop online instead.

The British Retail Consortium (BRC) said some retailers continue to struggle due to the coronavirus crisis, and it made a fresh call for government help with rents.

The housing ministry said landlords and tenants should “find solutions that work for both parties”.

Retail sales rose for the second consecutive month in July, the BRC said, up 3.2% compared with the same month last year. But the picture for retailers was mixed.

Food sales continued to be strong, while furniture and homeware sales also did well as people “increasingly invest in their time at home”, the BRC-KPMG retail sales report found.

Online shopping remained “prominent” in July, accounting for 40% of sales, said Paul Martin, UK head of retail at KPMG. Computer sales also continued to soar as people who could worked from home, he said.

And while local coronavirus lockdowns in the north of England had taken a toll on consumer confidence in the region, morale was higher in Scotland, she said.

“While the rise in retail sales is a step in the right direction, the industry is still trying to catch up lost ground, with most shops having suffered months of closures.

“The fragile economic situation continues to bear down on consumer confidence, with some retailers hanging by only a thread in the face of rising costs and lower sales,” she added.

KPMG’s Mr Martin said that while the return to school in September traditionally drove higher sales volumes, the unwinding of the government’s furlough scheme could make consumers less willing to spend.

And new data from credit card company Visa suggests that consumer confidence has been further knocked by difficulties getting a refund.

It shows that more than one in 10 people who have requested a return for items and services bought during the coronavirus lockdown are yet to get their money back.

Meanwhile, more than a third say they are avoiding making a big purchase over fears their money would not be returned if they needed a refund.

One major concern for many shops was footfall continuing to be down, “with many people still reluctant to go out, and fewer impulse purchases”, Ms Dickinson said.

Separate figures from market intelligence firm Springboard suggested a 40% drop in footfall in the month, which was still an improvement from June, and the best month since February.

Online spending is unlikely to decline, while a lack of tourism, more people working from home, and rising unemployment were all factors keeping people away from shops, it said.

But there was one bright spot for High Streets. Springboard figures for the beginning of August suggest footfall rising during the government’s Eat Out to Help Out scheme, which lets restaurant diners get up to 50% off their food and soft drink bills Monday to Wednesday.

However, according to the Centre for Retail Research, more than 22,000 UK restaurant jobs have been cut so far in 2020 and nearly 1,500 restaurants and outlets closed.

On Tuesday the BRC repeated a call for a government grant to help pay rents, saying retailers were “struggling”.

On Monday the BRC and a number of industry bodies, including UKHospitality, which represents restaurants and pubs, called for a so-called “Property Bounceback Grant”.

The groups, including landlords, called for the government to pay 50% of retail, hospitality and leisure rents for six months, at a cost of £1.75bn to the Exchequer.

The industry bodies claimed that this would generate tax revenue from economic activity of almost £7bn, and save 375,000 jobs.

In a joint statement, they said landlords have been “walking a tightrope to support their customers and protect the pensions and savings of millions of people invested in commercial property across the country”.

The Ministry of Housing, Communities & Local Government said that government support was already available for landlords, and that there was a moratorium on landlords being able to evict commercial tenants for non-payment of rent until 30 September.

There were also temporary measures to protect businesses from “aggressive” rent recovery, it added.

“We recognise the huge challenges being faced by commercial tenants and landlords during this period, which is why we’re working closely with them to ensure they are supported and would urge both landlords and tenants to follow the example of others and find solutions that work for both parties,” the housing ministry said.

“The government has taken unprecedented action to protect jobs and livelihoods, with a package of around £160bn of support, including loans, rates relief and grants for businesses to support them through the pandemic.”

CNG dearer by Rs 2 per kg in Delhi; hike seen in NCR, other cities too. Check revised rates