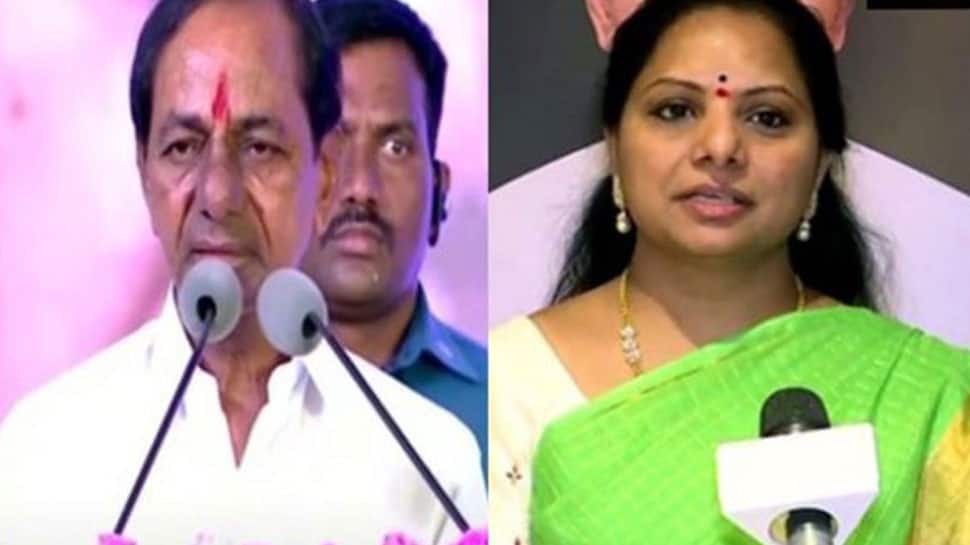 Hyderabad: The conspicuous absence of Telangana Chief Minister K Chandrasekar Rao`s daughter and senior leader K Kavitha from the grand launch event here to propel TRS on the national stage as Bharat Rashtra Samiti (BRS) has triggered much speculation on whether fissures had appeared in the state`s first family. Not only was Kavitha missing from the high-profile event, but her name was also missing from the TRS list of in-charges for the upcoming Munugode bypoll, raising eyebrows yet again.

On Wednesday, on the occasion of Dussehra, the TRS unveiled its bid to go national as BRS, a strong personal initiative of the chief minister which saw the support of regional parties like Asaduddin Owaisi`s AIMIM and Karnataka-based JD(S).

A grand general body meet was held at Telangana Bhavan here where TRS leaders and cadres from every nook and corner of the state arrived in large numbers. What added weight to the conjectures that all was not well in the first family was that Kavitha preferred to stay at her home here celebrating Dussehra. In fact, the TRS leader even posted a picture of herself performing prayers on the occasion.

“On this auspicious day of Dusherra, we performed Ayudha Pooja at home,” Kavitha said in a tweet. Even though Kavitha`s absence was noticed by TRS cadres and rivals, the absence of her name from a list of leaders who were made in-charges for the Munugode bypoll gained as much attention.

Chief Minister KCR`s son KTR, who is also the state IT and Industries minister, is one of the party`s in-charges of the bypoll scheduled for November 3. Several women leaders including ministers, MLAs and MPs like Sabitha Indira Reddy, Satyavathi Rathod, Padma Devender Reddy, Gongidi Sunitha and Deepika Yugender find themselves on the list.

However, Kavitha`s name is glaringly absent. Significantly, her brother Kalvakuntla Taraka Rama Rao, popularly known as KTR, was also present at the BRS launch.ANI reached out to Kavitha`s office for a comment but received no response to the queries about her absence from TRS general body meet and the BRS launch. Attempts were made to reach out to TRS leaders for the party`s version but they also did not comment.

The launch took place at the State General Body meeting of ministers, MPs, MLAs, MLCs and district-level coordinators and other leaders at the party headquarters Telangana Bhavan in Hyderabad. K Chandrashekar Rao presided over the meeting. JD(S) leader and former Karnataka chief minister HD Kumaraswamy along with 20 of his MLAs attended the launch event.