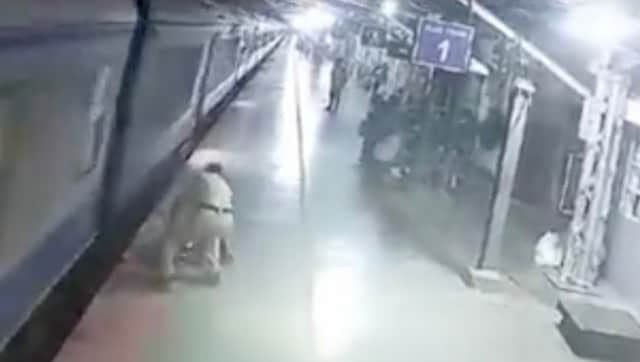 An RPF constable picks up a minor girl who fell while trying to board the train. The swift action of the constable saved the minor from falling into the gap between the platform and the train. Videograb: Twitter

Railway Protection Force has been tasked with the responsibility of ensuring the security of railway property, station area, and also of passengers. They efficiently work around the clock to provide a safe, secure, and comfortable travel experience to commuters across India. Thus, tasked with one of the most challenging tasks throughout the day, RPF officers also need to be vigilant of any kind of accidents that can happen on the platform or on the tracks. With their alert and quick action, officers have managed to save the lives of several people in the past. One such incident has recently come to light where an RPF head constable in a swift action saved a minor girl from going under the wheels of a moving train.

The incident took place in Kerala’s Tirur railway station where a minor girl was trying to board a moving train. Things went wrong when the train picked up speed due to which the girl slipped and fell on the platform.

However, the RPF officer who was present at the spot came to her rescue and moved the girl away from the train, thus averting a major accident. The video has been shared by RPF India’s official Twitter handle. The officer has been identified as head constable Satheesh.

The video was shared on Friday and has gone viral in no time. Many took to the comment section and lauded the alert officer. One commented, “I am proud of the honest jawans on duty”, while another commented, “Excellent job.” Words of praise were showered in the comment section, a user also raised the demand to focus on automatic door closure in suburban trains.

In the meantime, the video has also been viewed over 2,000 times and has received hundreds of likes.

This is not the first time such an instance has taken place. At a time when Indian Railways continue to caution passengers to avoid running on platforms behind moving trains and ensuring their own safety, people can be spotted continuing such acts. While some luckily get saved, some also become victims of unfortunate accidents.