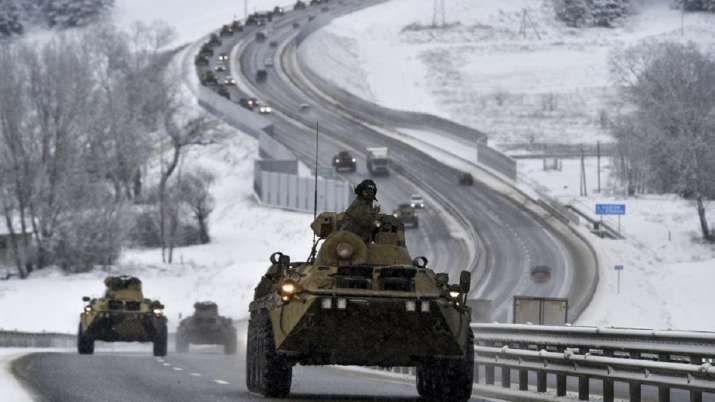 Russia Ukraine war: The embassy of the United States in Kyiv on Monday urged US citizens still in Ukraine to depart the country immediately. The US State Department has also issued a security alert warning that Russia is stepping up efforts to launch strikes against Ukraine’s civilian infrastructure and government facilities in the coming days.

“If you hear a loud explosion or if sirens are activated, immediately seek cover,” the State Department said in its alert.

“If in a home or a building, go to the lowest level of the structure with the fewest exterior walls, windows, and openings; close any doors and sit near an interior wall, away from any windows or openings.”

The development comes after the US intelligence community on Monday declassified a finding that determined that Russia would increasingly target Ukrainian civilian infrastructure, according to a US official familiar with the intelligence.

The official was not authorized to comment publicly about the finding and spoke on the condition of anonymity.

The new intelligence comes as Russia’s brutal invasion of Ukraine will hit the six-month mark on Wednesday, which coincides with Ukraine’s independence day from Soviet Union rule.

The official said, however, that the intelligence finding is not specifically tied to concerns about Zaporizhzhia.

The Biden administration is battling to keep western allies — and Washington — focused on maintaining pressure on Russian President Vladimir Putin.

Senate Republican leader Mitch McConnell said on Monday the “single most important thing going on in the world right now is to beat the Russians in Ukraine”.

Speaking at a luncheon event in Scott County, Kentucky, McConnell said the one fear he has is that the US and others will “all kind of lose interest” as the war drags on.

“We need to stick with them,” McConnell said.