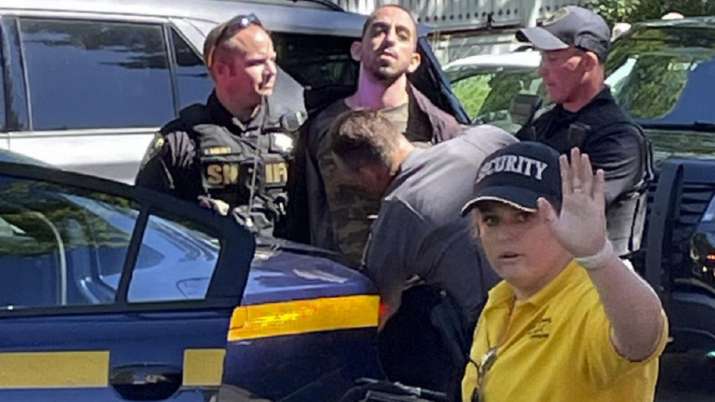 Salman Rushdie attack: Hadi Matar, a 24-year-old from Fairview, New Jersey was identified as the attacker who stabbed renowned author Salman Rushdie ahead of his speech in New York. He was arrested by the New York State Police, moments after the attack.

Rushdie, who faced Islamist death threats for years after writing “The Satanic Verses”, was stabbed on stage on Friday while he was being introduced at the event of the Chautauqua Institution in Western New York.

Who is Hadi Matar?

Hadi Matar is the prime suspect in the stabbing attack on author Salman Rushdie. He hails from Fairview, New Jersey and is 24 years old. As per the police, Matar jumped on the stage soon after Rushdie was introduced and “stabbed him at least once in the neck and at least once in the abdomen”.

The president of New York’s Chautauqua institute, where Rushdie was to give a speech said the attacker had a pass to access the grounds “just the way any other patron would have”. Major Staniszewski said authorities are in the “process of obtaining search warrants for various items. There was a backpack located at the scene. There were also electronic devices”.

Soon after Rushdie was stabbed, a report surfaced that said that Hadi Matar was sympathetic to “Shia extremism” and the causes of Iran’s Islamic Revolutionary Guard Corps. Rushdie faced Islamist death threats for years after writing “The Satanic Verses”, for which he had received a fatwa, a religious decree, by the then Iranian revolutionary leader Ayatollah Ruhollah Khomeini. The threat forced him into hiding for several years. Since the 1980s, Rushdie’s writing has led to death threats from Iran, which has offered a USD 3 million (roughly Rs 24 crore) reward for anyone who kills him.

A preliminary review of Matar’s social media accounts by law enforcement showed him to be sympathetic to Shia extremism and the causes of the Islamic Revolutionary Guard Corps (IRGC), a law enforcement person with direct knowledge of the investigation told NBC News.

No direct links between Matar and the IRGC

Though there are no direct links between Matar and the IRGC, law enforcement officers reportedly found images of slain commander Qassem Solemani and an Iraqi extremist sympathetic to the Iranian regime in a cell phone messaging app belonging to Matar, according to NBC News. Soleimani was a senior Iranian military officer who served in the Islamic Revolutionary Guard Corps from 1998 until his assassination in 2020.

Rushdie’s book The Satanic Verses has been banned in Iran since 1988, as many Muslims consider it offensive to Islam.