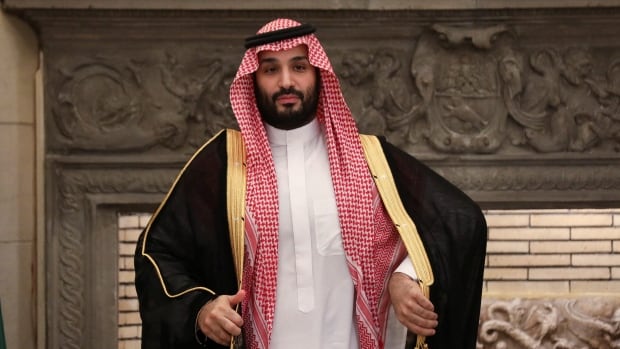 A human rights group said it filed a legal complaint with a Paris court on Thursday alleging complicity by Saudi Arabia’s crown prince — who is visiting France — in the gruesome 2018 killing of U.S.-based Saudi journalist Jamal Khashoggi.

The Washington-based group Democracy for the Arab World Now, or DAWN, called on French authorities to open a criminal investigation of Saudi Crown Prince Mohammed bin Salman, who was scheduled to meet French President Emmanuel Macron for a working dinner later Thursday.

In a statement on its website, the group said it filed a 42-page complaint arguing that the prince was an accomplice to the torture of Khashoggi in the Saudi consulate in Istanbul in 2018 and his disappearance.

DAWN focuses on human rights violations in Gulf Arab autocracies, including Saudi Arabia and the United Arab Emirates. It said two other rights groups backed its call for a French investigation and argued that the prince should not have immunity from prosecution because he is not the Saudi head of state.

“As a party to the UN conventions against torture and enforced disappearances, France is obliged to investigate a suspect such as Bin Salman if he is present on French territory,” Sarah Leah Whitson, DAWN’s executive director, said in the statement.

The Saudi prince is making his first official visit to the European Union since the 2018 killing of Khashoggi at the Saudi consulate in Istanbul. The journalist’s body was dismembered with a bone saw, according to Turkish officials.

Bin Salman arrived in Greece on Wednesday following a three-day visit to Africa.

France and other European nations are seeking to secure sources of energy to lessen their dependence on oil and gas supplies from Russia. France is also a major weapons and defence supplier to Gulf nations.

The prince has been steadily attracting big-name investors back to the kingdom since Khashoggi’s killing. He has also reset Saudi relations with Turkey, a key step toward rehabilitating his international standing.

Western intelligence determined that Prince Mohammed was complicit in the killing. The prince lost appalled supporters in the West who had previously been cheering his social reforms inside the kingdom. He maintains he had no knowledge of the operation that was carried out by people who directly reported to him.

Macron was one of the highest-profile world leaders to meet the prince shortly after the killing, during a tense chat caught on camera at the Group of 20 summit in Argentina in 2018. They have met several times since.