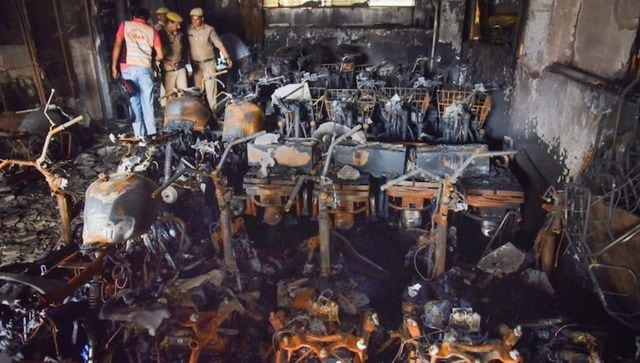 Over-charging e-scooters could have led to the fire that spread to the hotel in Secunderabad and killed eight. Putting out fires in EVs with lithium-ion batteries is challenging as it requires 10 times more water than gas-powered vehicles

At least eight people were killed and seven injured after a massive fire broke out at an electric scooter showroom and spread to a nearby hotel in Telangana’s Secunderabad late Monday night.

The blaze and smoke which ignited from the cellar and ground floor of the commercial building soon engulfed the upper floors where the Hotel Ruby Pride was located.

Sources told NDTV that the flames erupted due to a short circuit in the basement of the building, where 40 electric vehicles of GEMOPAI brand were parked.

The short circuit was reportedly triggered by the batteries of the e-bikes that were being charged, as per NDTV.

“It appears there are 23 rooms on all four floors in the hotel. The smoke traversed through the staircase from the bottom up to the top floor and completely engulfed all floors. Some people who were sleeping in the first and second floors came to the corridor through the thick smoke and died due to asphyxiation,” Hyderabad Police Commissioner CV Anand was quoted as saying by PTI.

Telangana | Remaining people jumped from the building and were rescued by locals. They were rushed to the hospital, fire tenders on the spot: Hyderabad Commissioner CV Anand pic.twitter.com/uDrwDCSw8t

The Telangana police is yet to confirm the cause of the blaze, which will be done after the fire department’s investigation.

Prime Minister Narendra Modi condoled the loss of lives in the tragic incident and announced a compensation of Rs 2 lakh each for the family of those who died, and Rs 50,000 each for the injured.

Telangana minister for IT and Industries KT Rama Rao also expressed anguish and declared Rs 3 lakh as ex-gratia to the families of the deceased.

How have electric vehicle (EV) fire incidents made headlines in the past few months? Why is it challenging to extinguish EV fires?

Why do EV fires pose a challenge?

Even though EV fire incidents have raised questions about the battery quality and safety of these vehicles, studies show such instances are rare.

As per research by firm AutoinsuranceEZ, battery electric vehicles have a mere 0.03 per cent likelihood of catching fire as compared to internal combustion engine vehicle’s 1.5 per cent, reports CNBC.

While hybrid electrics, with both high voltage battery and an internal combustion engine, have a 3.4 per cent chance of igniting.

EV fires are hard to put out as they require a large amount of water. Moneycontrol (File Photo)

Paul Christensen, a professor of electrochemistry at Newcastle University, says electric vehicles can be safer than petrol or diesel models.

“We’ve had a long time to fully understand the risks and hazards associated with petrol and diesel cars. We’re going to have to learn faster how to deal with the challenges with electric vehicles. But we will,” Christensen told CNBC.

Other instances of mishaps in India

Since EVs launched in India, incidents of these eco-friendly vehicles going up in flames have occurred on occasion.

On 27 May, a fire erupted in one of the Chennai showrooms of Indian electric two-wheeler maker Ather Energy.

Ather’s official Twitter handle, confirming the incident, said no one was hurt.

In a statement later the EV company had said this was an “isolated incident”.

The EV maker said the incident occurred after a vehicle involved in an accident was brought in for servicing.

The staff present at the showroom reportedly used high-pressure water wash to clean the vehicle, which reached the battery, reported Indian Express.

“Predictably, the cells had been shorted from inside due to the presence of water, and this lead to a thermal runaway event which led to the smoke and the fire, for which our teams called in the concerned department,” the company said, as per Indian Express.

According to 91 Mobiles, Axer Motors, the owner of the dealership, told Komaki Electric Vehicle Division  the blaze was caused by a short circuit in a charging scooter, which occurred due to flooding of the showroom’s basement.

On 22 June, a Tata Nexon EV was gutted in a fire in Mumbai.

Following the incident, Tata Motors said in a statement, “A detailed investigation is currently being conducted to ascertain the facts of the recent isolated thermal incident that is doing the rounds on social media.”

A delivery truck carrying 40 Jitendra EV electric scooters was engulfed in a blaze in Maharashtra’s Nashik, as per News18. In the wake of the fire incidents, Okinawa, Pure EV and Ola Electric had recalled 3,215 units, 2,000 units and 1,441 units, respectively, Mint reported.