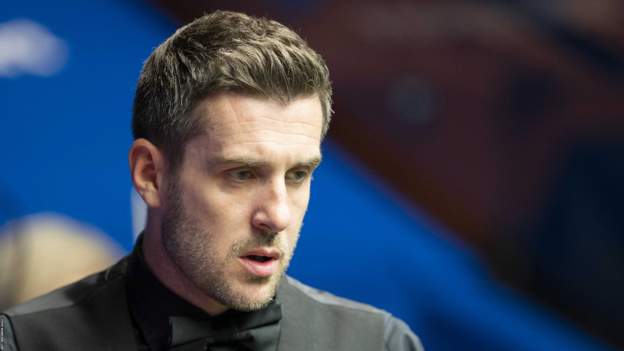 Three-time champion Mark Selby clinched his place in the World Championship semi-finals with a 13-7 victory over Neil Robertson at the Crucible.

Leading the Australian 11-5 overnight, Selby was quickly into his stride on Tuesday and took the opening frame with a confident break of 91.

Robertson, the 2010 champion, pulled back two scrappy frames but Selby completed his victory in the next.

Selby, 37, will face Mark Williams or Ronnie O’Sullivan in the last four.

Anthony McGill held off a fightback from Norway’s Kurt Maflin to take a 10-6 lead into Tuesday evening’s concluding session.

The Scot extended a 7-1 overnight advantage to 9-3 before Maflin won three frames in succession.

However, McGill claimed the last frame of the morning session and needs three more to progress to his first Crucible semi-final.

Selby back to his best?

The Leicester player suffered a crisis of confidence in the wake of his third world title win in 2017, losing his world number one ranking as he won just two tournaments in the following two years and crashed out in the early stages in Sheffield.

Selby battled through the first two rounds against Jordan Brown and Noppon Saengkham this year – and believes he is back to somewhere approaching his best form, despite not making a century break in the match.

“I was happy with my performance against Neil. I felt if I got a chance I could score, and my safety play was back up with how it was a few years ago.

“As a matchplay game it was right up there with my best performances. I can see the changes already, especially in my body language, so long may it continue.”

Robertson said: “It was a really tough game and apart from three or four frames in the match, every frame came down to the final few reds or the colours.

“Mark’s defensive safety was absolutely unbelievable. He didn’t let up really and I think he got his gameplan spot-on over the two days.”

‘So what that he hasn’t made a century break?’ – Analysis

Mark Selby has got progressively better through the tournament. There was a question mark over him coming in. He was a double-figures price with the bookmakers which is probably unheard of.

He wasn’t great in his first match against Jordan Brown but nobody is bothered about that now. He was good in the final session against Noppon Saengkham but he was good all the way through against Neil Robertson, keeping the Aussie away from the balls.

So what that he hasn’t made a century break? Do they put that on the trophy? Winning is the object of the exercise. He played great tactical matchplay and he has done his job.