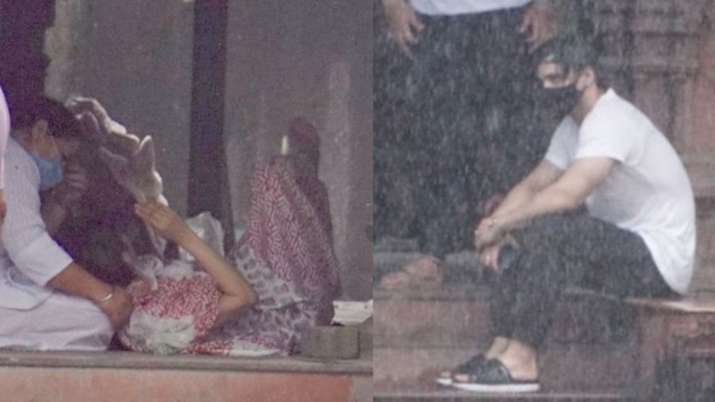 Sidharth Shukla and Shehnaaz Gill’s fans are still not able to believe that the Bigg Boss 13 winner has been laid to rest in peace. The actor suffered a massive heart attack on Thursday and succumbed to it. It is said that he was with his rumoured girlfriend Shehnaaz in his last moments. Fans are heartbroken after the videos and photos of Shehnaaz from Sid’s funeral surfaced on the internet. The actress was inconsolable and was crying continuously. On the other hand, fans felt the pain of Asim Riaz as well, who was a co-contestant of the late actor in the reality show. ‘SidSim’ and ‘SidNaaz Forever’ have been trending on Twitter after fans witnessed the devastating state of Asim and Shehnaaz on Friday.

Asim Riaz was a great friend to Sidharth Shukla in Bigg Boss 13. The two spent a memorable time in the show but later turned “frenemies”. On Thursday, after the news of Sidharth being taken to Coope Hospital surfaced, Asim was one of the first celebrities to reach there. He then also shared a video from their Bigg Boss days together and revealed that he had dreamed about Sidharth in the morning.

He wrote, “I had dream in the morning about the big boss journey…. And I saw Siddarth after watching his bb clip he came and gave a hug to me…I stil can’t believe this , see you on the other side SiD.”

With Sidharth Shukla’s death, fans have claimed that Bigg Boss 13 has ended in a bad way. Sharing pictures of Asim Riaz, Shehnaaz Gill and Rashami Desai from the funeral, the fans gave been crying their heart out. Praising Asim, one Twitter user wrote, “If an “enemy” is like this, then please God give me an “enemy” like #asimriaz when I die.” Another fan called Sidharth and Shehnaaz’s love immortal and wrote, “Love, it never dies, never goes away, It never fades away, so as long as you can hang on to it, it will remain immortal. #SidNaazForever”

Fans also lauded Rashami Desai’s presence at Sidharth Shukla’s funeral even after the two had had a controversial past. The duo has always been at loggerheads in Bigg Boss 13 and has had some of the ugliest fights in the history of the show. A fan tweeted, “Haters used to call #RashamiDesai A ‘Flushme, Momo Aunty’ right? now see she’s the only one who left her shoot midway and boarded the first flight that she got and standing by sid’s family and supporting them in his absence. She isn’t a Flushme, she is a queen. RESPECT”

Another tweeted, “As we all know sid and Rashmi had beautiful past during the show dsdt …Loudly crying face And she always say that Sidharth is her favorite co-star.. She genuinely love sid and we all can see that”

A popular face on television, Sidharth died at the age of 40 after suffering a massive cardiac arrest on Thursday. His mortal remains were taken to Cooper Hospital. The last rights took place on Friday in the Oshiwara crematorium on Friday. Sidharth is survived by his mother and two sisters.

Jennifer Lopez, Ben Affleck not following each other on Instagram

‘Sex and the City’ star Willie Garson passes away at 57