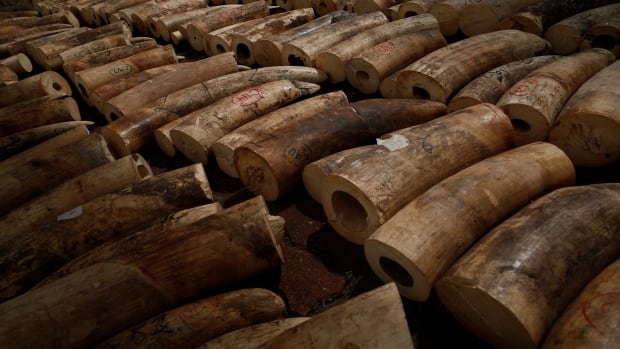 Singapore started crushing nine tonnes of elephant ivory on Tuesday as part of its ongoing fight against illegal trade in wildlife.

The city-state, a nautical waypoint in shipments of banned animal products between Africa and Asia, is destroying tusks worth an estimated $17.4 million Cdn, including a record 8.8-tonne seizure last year that authorities said came from nearly 300 African elephants.

The ivory destruction was streamed online. Workers in hard hats were seen emptying trolley-loads of tusks into a skip where they were then pulverized by an industrial rock crusher.

The crushing process may take several days and the fragments will then be incinerated.

“The destruction of the ivory … will prevent it from re-entering the market and will disrupt the global supply chain of illegally traded ivory,” the National Parks Board said of the event, which comes ahead of Wednesday’s World Elephant Day.

An estimated 100 African elephants are killed every day by poachers seeking ivory, meat and body parts, leaving only 400,000 remaining, environmentalists estimate. A large chunk of the demand for ivory comes from Asian countries such as China and Vietnam, where it is turned into jewels and ornaments.

As well as taking a tough stance on transited products, Singapore said last year it would ban the domestic trade in ivory by September 2021.

“Elephant poaching is at crisis levels in Asia and Africa due to the illegal trade,” said R. Raghunathan, CEO of World Wide Fund for Nature Singapore.

Raghunathan said the city-state’s ivory crush and other initiatives underline its determination to “stamp out the illicit transit of wildlife products through Singapore.”