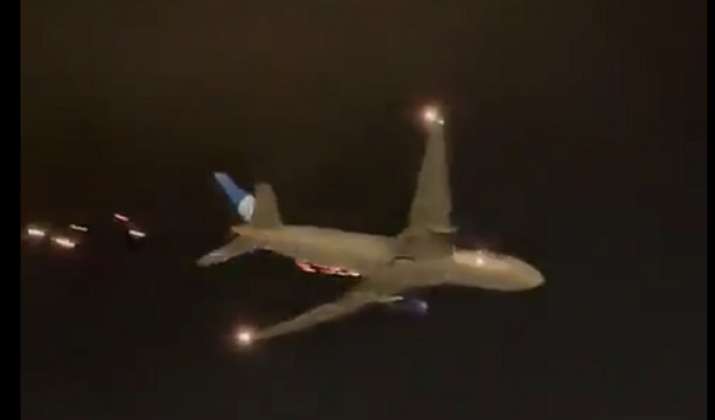 A viral video shows sparks coming out of a flight that took off from Newark airport in the United States, sending waves of horror among the citizens. The flight, identified as a United Airlines plane faced sparks flying from one of the wings, just a few minutes after it took off. The video has been widely surfacing on social media. After the sparks flew from the wing, the burning debris was falling onto the ground.

The flight took off from Newark International Airport in New Jersey, the US and its destination was Sao Paulo in Brazil. The video astounded social media viewers, who blamed the airline for its poor maintenance. In a statement made by Aero explorer, it stated that the aircraft was a Boeing 777-200ER. It returned to Newark 1.5 hours after the take-off, the outlet further said citing data from FlightRadar24.

A few Twitter users who were angry commented on the footage. “All because someone didn’t put their phone on airplane mode,” tweeted one user.

“Terrible but thanks to the pilot they landed safely,” said another. The cause of the incident is not known yet, but there are concerns about old planes. To diminish those fears, United has ordered dozens of Boeing 737 MAX aircraft, which it will receive in 2023.

The Chief Commercial Officer Andrew Nocella stated that “With a number of our aircraft nearing the end of their lifecycle and the growth opportunities that we know will exist in the COVID-19 recovery period, this agreement will help us to grow as demand returns”, which was quoted by Reuters news agency after the agreement was signed. In the context of the new Boeing order, United had also said that it moved up delivery of 40 previously ordered MAX aircraft to 2022 and 5 to 2023, meaning it will have 94 new aircraft in its fleet.