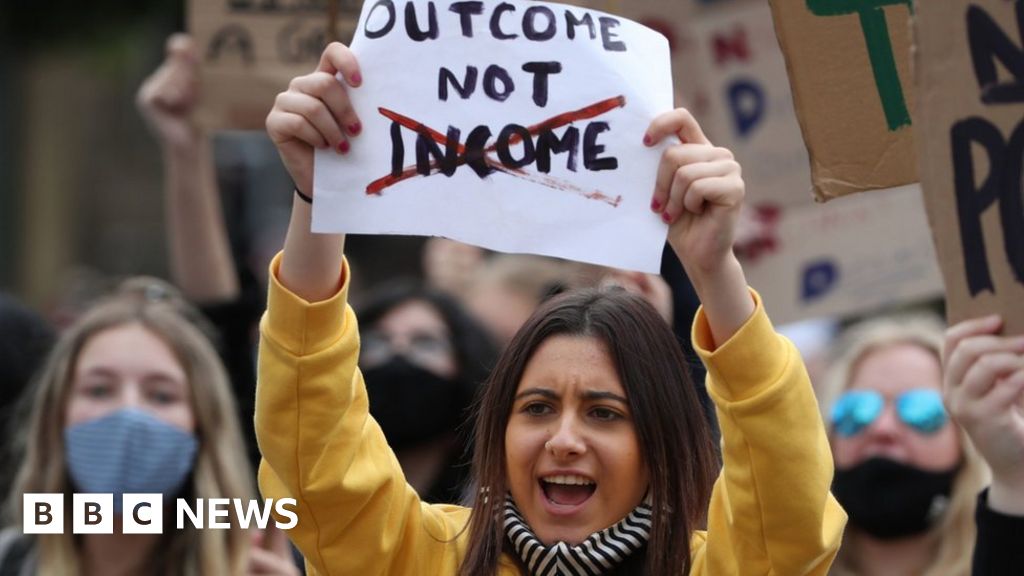 Students are calling for exam results across the UK to follow Scotland in ditching the moderation process that has lowered grades.

The National Union of Students wants teachers’ predicted grades to be used.

A-level results are being published on Thursday – linked to how schools performed in previous years, in a way rejected as unfair in Scotland.

England’s Department for Education has so far rejected changes to how replacement grades are calculated for exams cancelled by the pandemic.

Education Secretary Gavin Williamson has defended the system as “fundamentally a fair one”.

But NUS president Larissa Kennedy said switching to teachers’ predicted grades and removing the moderation that pushed down grades in 125,000 exam entries in Scotland, was the “least worst option available”.

The row in Scotland, which has ended in a government u-turn, was over the fairness of linking estimated grades to the performance of a school in previous years.

It drew accusations that high-achieving pupils in low-performing schools would lose out – and that this would particularly discriminate against young people in deprived areas.

But this is similar to the approach being used in England, Wales and Northern Ireland for A-level results being published this week.

The NUS says that it will be unfair if “thousands of students do not receive the grades they deserve because of where they live”.

Mary Bousted, co-leader of the National Education Union said the decision in Scotland created “huge problems” for the government in England.

She said it meant their students applying for UK university places with results based on “completely different criteria and wildly different pass rates”.

“This will only increase the worries that students in England have about the fairness of the grades they will receive on Thursday,” said Dr Bousted.

England’s exam watchdog Ofqual has warned that using teachers’ predictions would push up grades to an extent that it would make it unfair for those with A-levels from previous years.

The watchdog says that using teachers’ predictions the proportion getting top grades would have risen by over 12 percentage points, so that about 38% of entries would have got A* or A grades, much higher than any previous year.

Instead the watchdog has used a system of moderation with the biggest factors being the ranking order of pupils and the previous results in a school.

This gives limited influence to teachers’ predictions and there is no direct link to how an individual pupil did in previous exams, such as their GCSE results.

But if pupils miss out on a university place, but a school then appeals against the result, universities have been told to keep the place open until the appeal has been completed.