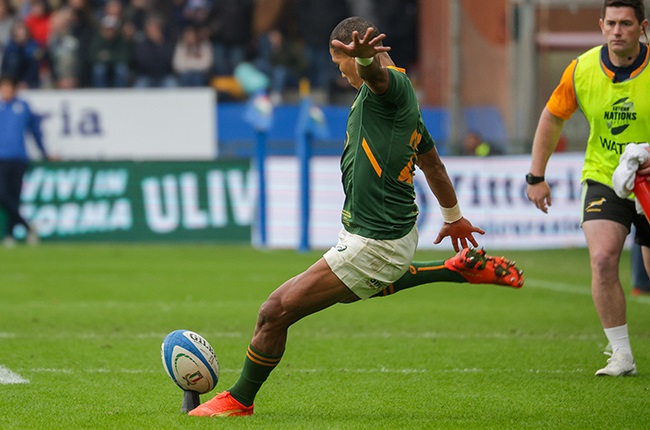 Springbok coach Jacques Nienaber was seriously impressed with Manie Libbok’s flyhalf display in the 63-21 win against Italy on Saturday, saying the pivot has taken ownership of his role.

Libbok came on in the 46th minute after Cheslin Kolbe limped off with a suspected hamstring injury after scoring the Boks’ third of nine tries.

Libbok has started both of his Tests off the bench, but his 30-plus minutes’ audition behind a dominant pack allowed him to have the freedom of the Stadio Luigi Ferraris.

Libbok’s game management allowed the Bok backs, who were more than adequate for the best part of the first half, to breathe even more in the second stanza.

Libbok was also composed from the tee, slotting five out of six conversions as the Boks finally had something to shout about from their tricky tour.

“I was asked during the week as to where Manie was in our pecking order and I said he was only one injury away from starting,” Nienaber said.

“He’s really worked hard in the last couple of weeks, and he’s slotted in nicely.

“Every week, he grew in confidence in terms of getting comfortable with how things work, what’s expected of him, and taking ownership of his role.

“He’s come on in leaps and bounds and I thought he was excellent when he came on.”

The Boks may have crushed what was always deemed to be the weakest of the touring teams they were going to face, but the conversion of opportunities was what stayed with Nienaber.

Nienaber admitted their improvement was still gradual, but the players are slowly getting to grips with their subtle variations in play.

READ | Bok ratings: Liberation of the backline … at last!

“We capitalised on the opportunities that we created in this game,” Nienaber said.

“I don’t think it’s near perfect and I think we can always get better. The work the guys have put in during the last month in terms of what we’re looking for next year, the guys bought into it.

“They’re taking ownership of it and we’re building.”