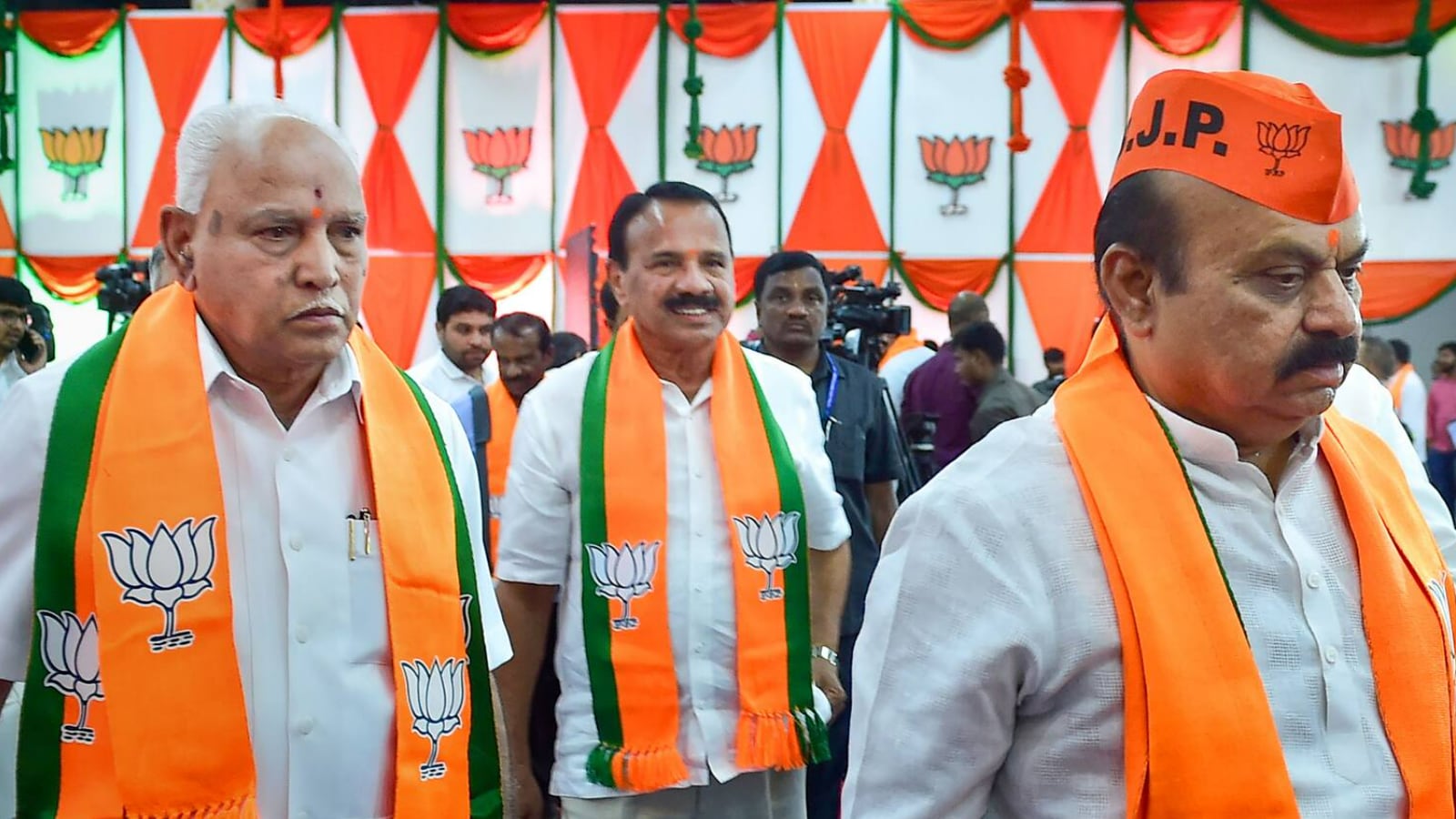 The Karnataka BJP state executive meeting on Friday sounded the poll bugle for the 2023 assembly elections and set the target of around 150 seats for the party. The BJP also highlighted its achievements that ensuring the anti-conversion and anti-cow slaughter bills showed how committed it has been to upholding the Hindutva ideology and delivering on promises.

Senior leaders including state party chief Nalin Kumar Kateel and BJP parliamentary board member BS Yediyurappa said that they will begin a Vijay Yatra in October and appealed to the party members to ensure a thumping victory. They also dismissed the Congress’s ongoing Bharat Jodo yatra as a “joke”.

At the meeting, two major resolutions were passed. The first one congratulated the Centre on the banning of the Popular Front of India and also the Basavaraj Bommai-led BJP government in Karnataka for pushing for the ban. The resolution said that the PFI had been involved in over 320 criminal cases including 18 murder cases, which included that of RSS leaders like Praveen Nettaru.

“When the Congress came to power, then CM Siddaramaiah withdrew all cases against the PFI. We condemn this move and that is why every effort was made to ban this anti-national group. Under the leadership of CM Bommai, Karnataka has done well and is moving in the right direction,” the resolution said.

“Under the leadership of PM Modi and union home minister Amit Shah, all anti-national organisations are being banned and every effort is being made to ensure that our country is safe for all citizens,” said a BJP leader who was part of the meeting.

The second resolution was on the Bharat Jodo Yatra and how it was a “comical” event that had no impact on the people of the state. The resolutions claimed that it was Jawaharlal Nehru who divided Kashmir and today the same Congress is out claiming it is trying to “Jodo” (unite) India. Congress is synonymous with corruption and Siddarmaiah and his ministers were the most corrupt, it was alleged.

“Siddaramaiah ensured that he got a B- report in 58 cases of corruption that were filed against him he made the anti-corruption body Lokayukta powerless and his ministers and now Karnataka’s Congress chief DK Shivakumar also involved in several scams like the solar power scam, etc,” the resolution said.

Speaking at the meeting, former chief minister and BJP parliamentary board member BS Yediyurappa said that nobody can stop the BJP from winning 150 seats in the next election. Setting the target for the polls, he also stressed how he, along with CM Bommai, Karnataka BJP chief Nalin Kateel, and Karnataka state incharge Arun Singh will tour across the state as part of the Vijay Yatra to ensure that they come back to power with a thumping victory.

“Nobody can stop us from getting 140 to 150 seats. We should all take a pledge to ensure that we come back to power,” Yediyurappa said at the meeting.

In all, the party leaders plan to cover 165 of the total 224 assembly segments by the end of December and chief minister Bommai and former CM Yediyurappa will start the Vijay Yatra from Raichur in the Kalyana Karnataka region on October 11. As per the plans, Bommai, Yediyurappa, and Kateel will visit 50 assembly seats each over the next three months to set the tone for the BJP’s campaign for the 2023 assembly polls.

“This Congress yatra will have no impact. They (Congress) should know that they have been thrown out of power in several states. Except for a few states, they have been voted out by the people of the country. This magic they are trying to create through this Bharat Jodo Yatra is comical,” Yediyurappa further stated.

Chief minister Bommai maintained that the BJP practices what it preaches and ensures that every effort is made to safeguard an individual’s freedom and equality as enshrined in the Constitution, unlike the Congress that “splits the country and then launches a Bharat Jodo campaign”.

He also emphasised how his government took a stand against corruption and ensured that investigations are conducted in a free and fair manner and the guilty are not spared. Referring to the PSI recruitment scam, Bommai said that it was the Congress government that did not give consent to inquire about DIG rank officers but it was he who gave the consent for inquiry against the officer. He also listed out his government’s achievements including Karnataka attracting the highest FDI in the country.

State BJP chief Nalin Kumar Kateel stressed how the BJP government pushed for the anti-conversion bill and the anti-cow slaughter bill, terming them the biggest achievements under the leadership of Bommai.

Speaking on the issue of corruption, Kateel also claimed that of all the Prime Ministers India has had under the 60-year Congress regime…“From Nehru to Manmohan Singh, it is only Lal Bahadur Shastri who has been a clean PM. The rest of them have been corrupt. Congress is the Mahapitamah of corruption and scams and today they are claiming to be bringing India together? Was it not Congress that tried to split our Veera-Shaiva (Lingayat) community? They are talking of Jodo when in actuality they are creating a passage to Odo (run) away from India to Italy.”

The BJP has been planning its strategy to counter the Congress’s Bharat Jodo Yatra and has decided to hold state-wide tours, multi-city conventions, and rallies to reach out to the people on the achievements of the state government.

The party is also organising a mega rally for other backward classes (OBCs) in Kalaburagi on October 30, as part of its election outreach programme.