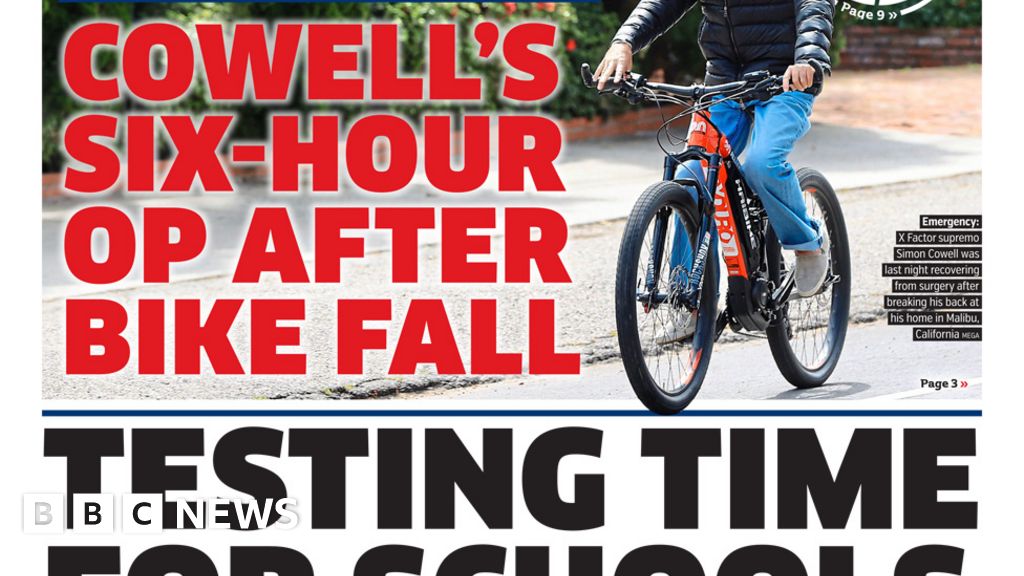 The issue of the re-opening of schools in England makes the lead for a number of papers.

The Daily Telegraph highlights the suggestion by the head of the Association of School and College Leaders that pupils should be taught on a “week on, week off” basis to limit numbers if there’s a resurgence of coronavirus.

Geoff Barton tells the paper that schools are “losing patience” with the government’s demands to have all children back, but with no official backup plan if this is not possible.

The Times reports that the children’s commissioner for England has set herself at odds with the government by calling for pupils and teachers – especially in secondary schools – to be routinely tested for coronavirus.

The paper says Anne Longfield’s remarks are in sharp contrast to those of schools minister Nick Gibb, who believes the present precautions are sufficient.

According to the Daily Mail, A-Level pupils whose marks are downgraded by the exams regulator for England when the results are published this week face missing out on their first choice university places – even if they appeal.

It says those who appeal must be awarded a higher grade by 7 September to get their first choice.

But the paper has learned that exam boards have refused to commit to this timeframe, instead giving themselves 42 days to resolve complaints, by which time the university term will have started.

For its main story, the Guardian says it’s learned that Downing Street is planning a controversial intervention to reverse the record decline in rape prosecutions.

According to the paper, the prime minister’s crime and justice taskforce is planning to set targets for police to refer more rape cases to the Crown Prosecution Service and for prosecutors to bring more cases to trial.

The paper says the CPS is likely to oppose the change for impinging on its independence. The service has in the past set its own targets for different crimes, it adds.

The i highlights what it calls a breakthrough in the treatment of type-1 diabetes – the less common form of the condition.

It says scientists have discovered that an existing treatment for rheumatoid arthritis can delay progression of the disease by years.

Prof Lucy Walker, of University College London, tells the paper: “We’ve found something new and if it holds up with further tests it’s a new paradigm that could potentially be really important.”

Sign up for a morning briefing direct to your inbox

Finally, the results of a poll to find out who was the best James Bond raises a few eyebrows.

A total of 14,000 fans took part in the survey, organised as a knockout tournament for RadioTimes.com

There’s no surprise who came top.

As the Sun puts it, Sean Connery won a thrilling head-to-head shoot-out.

But the Daily Express says that in a twist that will leave many fans shaken, neither Roger Moore nor Daniel Craig made it into the top three.

Instead, Timothy Dalton was voted second and Pierce Brosnan third.

“We weren’t expecting that, Mr Bond”, the Mail’s headline declares.