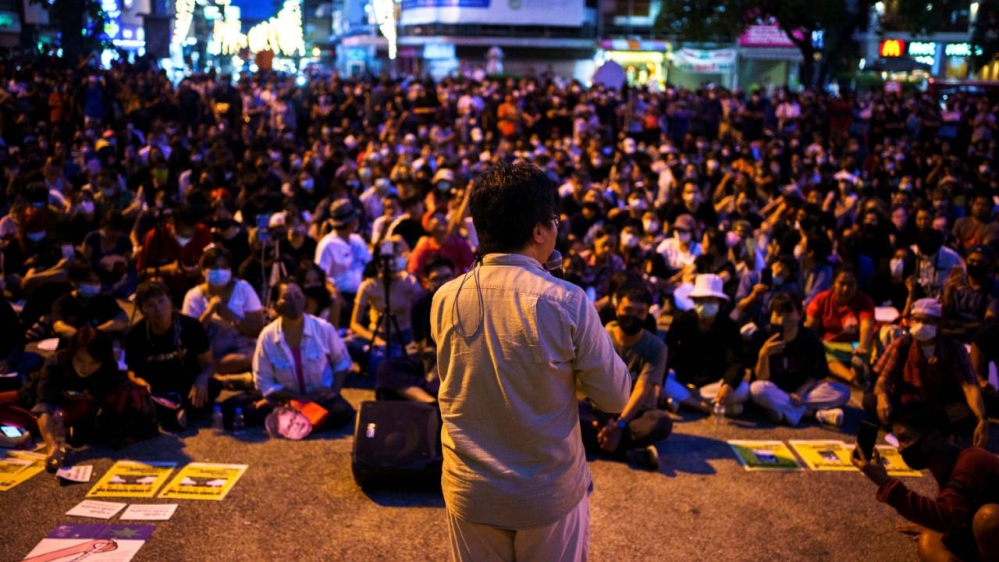 Students and other anti-government demonstrators plan to stage more rallies in the Thai capital, Bangkok, on Monday as they step up pressure on Prime Minister Prayuth Chan-ocha to call for new elections and implement constitutional reforms.

The latest wave of protests reflects growing anger among many young people towards the Prayuth administration. The former army chief took power in a 2014 coup, then remained in office after an election in 2019 many saw as heavily rigged in his favour.

After a period of relative calm in the country’s fractious politics, prolonged by lockdowns to combat the coronavirus pandemic, things are heating up again.

Many protests have been held on school and university campuses in Bangkok and other cities.

Over the weekend, hundreds of student protesters accused the government of attempting to stifle growing dissent following the arrest of two leading activists.

On Saturday, more than 1,000 people protested in Bangkok after human rights lawyer Arnon Nampa and student activist Panupong Jadnok were arrested and held overnight. They were later released on bail.

Protesters packed a concourse near a shopping mall in central Bangkok to hear speeches denouncing the arrests and calling for the prime minister to resign.

Tensions rose briefly as police officers moved in, telling the crowd they were only observing. They withdrew to a chorus of boos and chants for them to get out.

Police had arrested Arnon, a leading figure in the burgeoning protest movement, on Friday, charging him with sedition and defying an emergency decree imposed to control the coronavirus.

Critics say the emergency decree is actually being used to stifle political dissidents.

A second activist, Panupong, was also detained. Both men appeared in court on Saturday in Bangkok before they were granted bail.

Arnon and Panupong appeared in good health when they exited the court and pledged to continue protesting.

“We will join protests that are in accordance with the constitution, Arnon said.

Meanwhile, the Student Union of Thailand in a Facebook post said three student activists were being held at a police station to prevent them from joining activities in the northern province of Phitsanulok. The authorities denied this.

“There is nothing here, who can hold them? On what authority can we hold them?” Wisarnpong Soikunbodi, director of Border Patrol Police Sub Division 31, which oversees the station, told Reuters news agency.

In the northern province of Chiang Mai, where Arnon was scheduled to speak on Sunday, some 50 police officers were observing the protest, according to a social media post by the legal group Thai Lawyers for Human Rights.