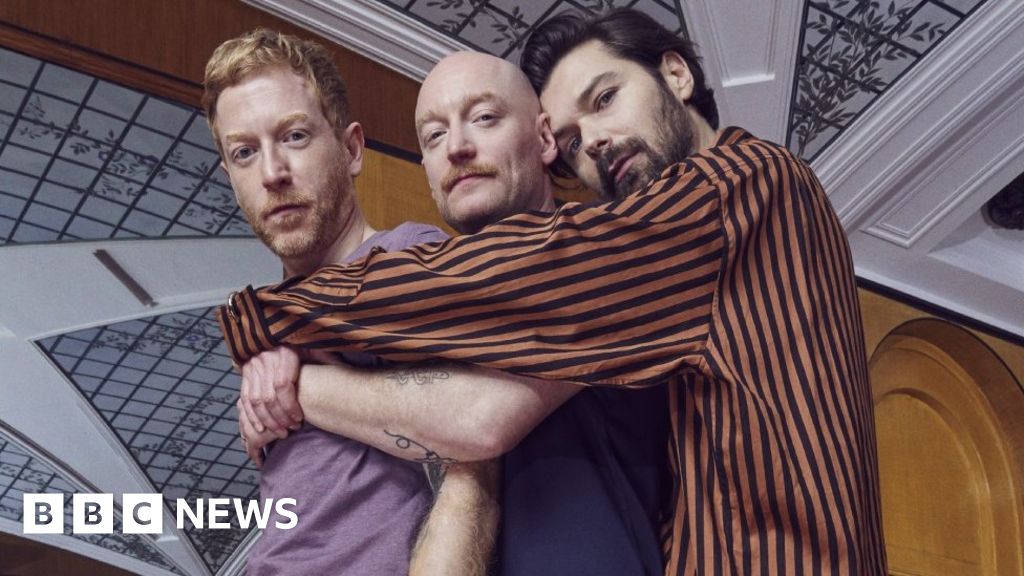 “Life has a weird habit of giving you stuff to sing about,” says Biffy Clyro’s frontman, Simon Neil. “There’s always something to set the cat amongst the pigeons.”

The band’s last album, 2016’s Ellipsis, was written after Neil suffered a number of bereavements and went through a period of crippling writer’s block. Before that, the recording sessions for 2013’s Opposites were overshadowed by drummer Ben Johnston’s alcoholism, which nearly drove the Ayrshire band apart (he’s since recovered), and by Neil’s wife suffering a series of miscarriages.

Things weren’t quite as bleak as they wrote and recorded their ninth album, A Celebration Of Endings – but there was a seismic disruption within the band’s inner circle that “really shook our bones to the core”.

“Loyalty is really important for us,” says Neil, “and there were two long-term working relationships we had, that deteriorated in ways that we couldn’t have envisaged.

“One guy was in the very, very inner circle. He’d worked for us from the very start and I thought the relationship would last ’til the day I died,” he says. “But we had the worst fall-out ever and the relationship just ended dead in its tracks.

“It’s a really sensitive thing to discuss and I don’t want to disrespect him by naming him, because I do appreciate there’s two sides to every story.

“The other person had been a part of our crew for years – and they basically [chose] money over working with us, which I understand at a certain point, but that was really an eye-opener for me. I felt like we’d just been a money train or whatever for 12 years.”

The group were forced to “re-evaluate everything,” he says, but the process ended up being liberating.

“And, looking back now, I’m glad, because every album needs a spark. When you don’t have something to get off your chest, it can be hard.

“But after we parted ways with those people, I felt so focussed. It really cleared my mind. And that has really been a wonderful realignment in the last year.”

The trio, completed by Johnston’s twin brother James, met as teenagers in Kilmarnock, playing first as Screwfish before morphing into Biffy Clyro by the time they attended college in Glasgow.

The origins of the name remain shrouded in mystery (although the best explanation is that it derives from Sir Cliff Richard’s favourite pen, aka Cliffy’s Biro) but their musical rise needs no explanation.

Mixing stadium-ready choruses with bone-crunching riffs, they’ve established themselves as must-see festival headliners; while quieter songs like Many Of Horror and Rearrange brought them new, mainstream audiences at the turn of the decade.

Their commercial breakthrough was completed when Matt Cardle covered Many Of Horror as his X Factor winner’s single in 2010; although the band only truly believed they’d made it when Courtney Love grabbed them at the NME Awards to say they were her daughter’s favourite band.

“Her dad was one of the reasons we started making music,” Ben Johnston recalled later, “so that was mind-blowing.”

All this success was achieved hand-in-hand with their Scottish road crew – which is why last year’s personnel changes hit them so hard.

The fall-out is all over the new record. The Napoleonic charge of End Of pummels home the scathing goodbye: “You wouldn’t know how to be a friend / You’re ill-prepared.”

Neil is more reflective on Opaque, however, suggesting the door is open for reconciliation. “You took the money and run,” he sings, “But you could have made it right / There’s still time.“

More generally, the album bristles with the confidence of a band who’ve survived a crushing blow.

The first single, Instant History, doubles as their new mission statement. “This is the sound that we make,” bellows Neil, resolute, even as the song ditches the band’s signature guitar riffs for a pounding electronic beat.

Biffy’s experimental turn shouldn’t come as a surprise to fans. On their very first single in 2001, they were wilfully eclectic – switching from the pop-rock title track (27), to a darkly-coded metal opus (Instructio4), before ending on a sweetly-strummed acoustic ballad (Breatheher).

They’ve got better at song titles in the intervening 19 years, but their appetite for adventure has remained constant.

Neil says he deliberately goes out of his way to listen to music he doesn’t like or understand, to stop him writing by rote.

“I could write a song inspired by Nirvana in my sleep,” he says, “but I want to feel unsure about what I’m doing. That’s a key thing – taking a leap of faith.

“So I’m listening to a lot of old school Tina Turner at the moment, and a lot of hip-hop.

“Then there’s a band from the States called Imperial Triumphant, who are kind of death metal but their album starts with a barbershop quartet. And then they have jazz trombones and trumpets playing really brutal riffs.”

“The production of that album, it’s so messed up,” he enthuses. “It’s one of the most avant-garde pop records, one of the best-recorded pieces of music I’ve ever heard.

“Obviously, our song doesn’t sound like Janet Jackson, but it’s about getting yourself out of that zone of sticking lots of guitars on things. Let’s move forward, let’s break new ground.”

Neil has been inspired to apply that message to all aspects of his life. He sees the coronavirus lockdown as a giant reset button, bringing communities together and potentially reversing the politics of individualism.

“I’ve felt a strength from the fact we’re all communicating,” he says. “There’s moments during this lockdown where I’ve felt less alone then I ever have. I think we’ve all woken up, and we’re at a new level of decency.”

He recognises “there are still portions of people that want division” but believes many of us have a newfound scepticism for the “false prophets” who “don’t trust the experts, or don’t believe in science” and “promise to fix all your problems in one fell swoop”.

“And so we’re embracing stuff that we would never have embraced before. Like the Black Lives Matter protests: I think the reason they’ve taken such root this time, and will not be ignored, is because of lockdown.”

Those beliefs have seeped into his music for the first time. Several songs on A Celebration Of Endings encourage activism, most notably The Champ, which rails against the “grey man” who never stands up for himself and ultimately loses “every little thing that you’d always cherished”.

Lyrics like those were written as a response to Brexit and the Scottish referendum, but “the meaning of them have changed beyond recognition,” says Neil, and he is itching for the chance to sing them with an audience.

For now, though, he’ll have to content himself with a live stream, arranged for 15 August in an “iconic Glasgow venue”.

In preparation, he’s been living in a bubble with his band-mates for the last few weeks.

“We were the first people who saw each other when that first phase of lockdown lifted, and we were hugging each other like we were children in nursery school,” he laughs.

With no audience to consider, the band have been indulging some of their more outlandish ideas for the concert, with several stages and set-ups being built within the venue.

“Don’t get me wrong, I would do anything to be able to stand on that stage and have my ego stroked and sing with thousands of people,” the singer laughs. “I miss everyone so, so much, but it is about making the best of a tricky situation.”

And when the band do get back on the road next year, how will the new record fit into their live show? With nine albums under their belt, are there any songs that can get dropped from the setlist without disappointing fans?

“I don’t think we’ll quite be Springsteen level but our next tour will probably be a two-hour show,” says Neil.

“I won’t apologise for that, it’s a good problem to have – because there’s plenty of bands that still end with a song from their first record 20 years ago, so I feel really fortunate that people connect with our new songs as well.”

Biffy Clyro’s new album, A Celebration Of Endings, is out on 14 August.