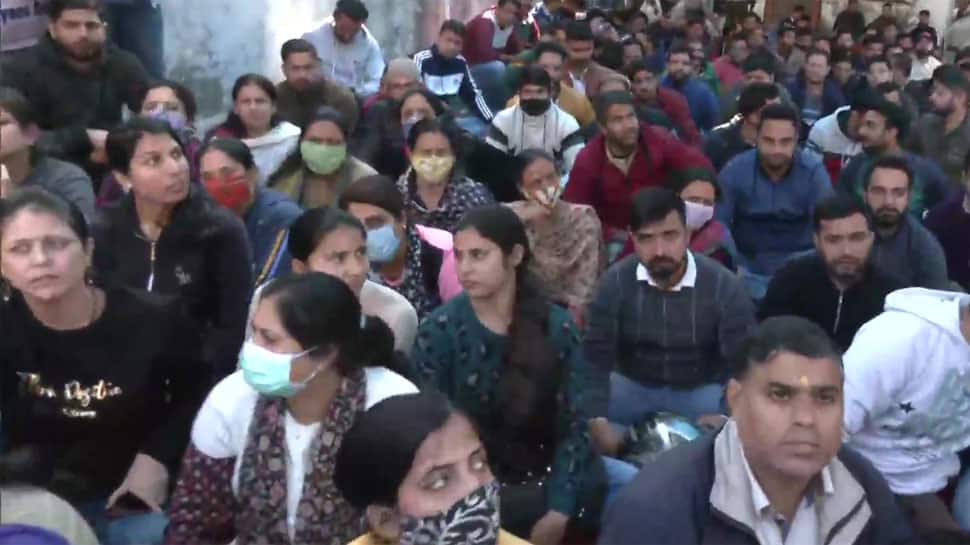 NEW DELHI: Israeli filmmaker Nadav Lapid’s remark calling The Kashmir Files ‘vulgar and propaganda’ at the closing ceremony of the 53rd International Film Festival of India (IFFI) has triggered huge protests in parts of Jammu and Kashmir, with many calling his comments “unwanted and condemnable.” According to reports, hundreds of kin of Kashmiri Pandits, who were brutally massacred by the terrorists in the Kashmir Valley, took to the streets and condemned the Israeli film director’s remarks describing director Vivek Agnihotri’s highly acclaimed film ‘The Kashmir Files’ a “propaganda movie” and “vulgar”.

The protestors demanded that the Indian government should immediately deport Lapid back to Israel. Calling Vivek Agnihotri’s movie the ‘Schindler’s List’ of India, the Kashmiri Pandits even sought to know if Lapid was actually a Jew.

Lapid, the chairperson at the 53rd International Film Festival of India (IFFI), had landed in soup by calling ‘The Kashmir Files’ a “propaganda movie” and “vulgar” and said that he was shocked to see the film. Condemning Lapid, a Kashmiri Pandit Yogesh Pandita said, “Kashmir Files was 5%, they didn’t see 95% of what happened. We welcome the Israeli envoy’s statement condemning his remarks” Another member from the Kashmiri Pandit community, Ranjan said “It is highly condemnable. He rubbed salt into our wounds.”

Yogesh Pandita says, “Kashmir Files was 5%, they didn’t see 95% of what happened. We welcome Israel Amb’s statement condemning it”

“The Kashmir Files unmasked the 30-year-old propaganda designed to hide the truth on the exodus of Kashmiri Pandits,” Vikas Raina, son of principal Ashok Kumar Raina, who was killed by Hizbul Mujahideen, said.

“Does he know my pain? I lost my father when I was a child. My father, along with two of his lecturers, were brought down from a bus and sprayed with a volley of bullets,” he said. “The Kashmir Files is India’s Schindler’s List. It is our truth,” he said.

Sandeep Kaul, whose grandfather Radha Krishen and father Shiban were dragged out of their house and killed by terrorists in South Kashmir’s Kulgam district, demanded an apology from Lapid for “mocking the tragedy” depicted in The Kashmir Files. “His remarks have reopened my old wounds. It has brought pain to me and my mother,” Kaul said.

Ravinder, whose father was killed by terrorists and his body chopped into pieces, said it is shameful on Lapid’s part to make such a comment. “I want strict action against him for terming the film vulgar and propaganda. He should apologise”, Ravinder said.

As the public anger over Nadav’s remarks grew, Israeli envoy to India Naor Gilon took a big step and slammed the IFFI Jury Head and also ”apologized for the conduct” of his countryman at the 2022 International Film Festival of India in Goa. Gilon wrote an open letter in which he said Nadav Lapid should be ashamed of what he has done.

“It`s not in Hebrew because I wanted our Indian brothers and sisters to be able to understand. It is also relatively long so I`ll give you the bottom line first. YOU SHOULD BE ASHAMED,” the Israeli envoy said in a series of tweets. Gilon also chided Lapid and outlined that the friendship between the people and the states of India and Israel is very strong and will survive the damage inflicted by him.

“The friendship between the people and the states of India and Israel is very strong and will survive the damage you have inflicted. As a human being I feel ashamed and want to apologize to our hosts for the bad manner in which we repaid them for their generosity and friendship,” said Gilon.

“My suggestion. As you vocally did in the past, feel free to use the liberty to sound your criticism of what you dislike in Israel but no need to reflect your frustration on other countries. I`m not sure that you have enough factual basis to make such comparisons. I know I don`t,” he added.

Advocate Vineet Jindal, a Supreme Court lawyer also filed a complaint with Goa Police against Nadav Lapid for allegedly insulting the sacrifice made in Kashmir by the Kashmir Pandits by calling the movie `vulgar` and `propaganda`.

Jindal, in his complaint, sought registration of charges against the Israeli director under sections 121,153,153A and B, 295, 298 and 505 of the Indian Penal Code for his alleged comment on the movie, which is based on the true story of Hindu genocide in Kashmir. Several top politicians and noted film personalities also strongly condemned Nadav Lapid’s remark on a highly sensitive film.