Home India State ‘The Last Craftsman’, a try to save Kashmir’s dying art of ‘Khanyari... 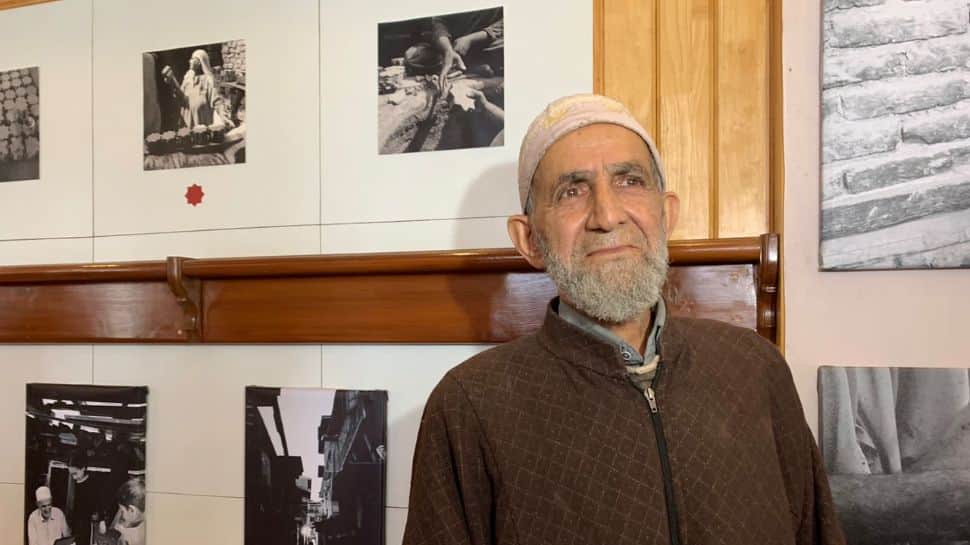 Srinagar: Kashmir region was named among the most creative cities of the world by UNESCO. The valley has an abundant heritage of art and craft and one such craft is Glazed pottery. The glazed tiles and other items have been made here for centuries but the art was on the verge of extinction. There is only one Kashmiri artisan, Ghulam Mohammad Kumar, left making these glazed tiles in the valley, and to give tribute to his rich legacy and art, a local Kashmiri architect Zoya Khan organised an exhibition in collaboration with the Department of handicrafts in Srinagar’s Government Arts Emporium. Zoya has been learning the craft from Kumar for the last two years and making sure that the art doesn’t die. Kumar, lives in Srinagar’s Khanyar area where he is the lone artisan still making these glazed tiles.

“I have been making these tiles for around 50-60 years, I learnt it from my father. I am the only one making these tiles. I am trying my best to teach youngsters. I am hoping more children will come and learn this art and pick it up. This art was spread all over the whole Kashmir region, there is no help from the government yet about making a workshop where I could teach. Now the government has promised me that they will provide me with a space where I can teach it to other children. I am sure I will take this to young people. People shifted from pottery as it wasn’t that lucrative, I still live in our ancestral house as there was no help ever from anyone. ” Artisan Ghulam Mohammad Kumar said.

Zoya has been taking these pictures over the last two years that she has spent learning and preserving the art form from Kumar. She wants to reach out to as many people about this art form. And through these pictures, she is making sure to reach out to the younger generation and attract them towards this art form. While working with Kumar, she has incorporated these Kashmir tiles in various projects across the region. With only one motive, to educate the young generation about the craft so that it lives forever.

Zoya Khan, Architect and Artist said “My exhibition is called the ‘Last Craftsman’ because Haji Saab is the last craftsman who is making these khanyari tiles in the valley. They were a very important component of our residential houses, the vernacular Architecture in the cold city, these were a very important component of that. The demand completely faded. What is most fascinating is the person who makes it, his traditional knowledge, he is such a wealth of information, and the way he describes his colours, the way he sits in his factory, birthing these tiles there is just the most fascinating thing. I started procuring these tiles for my project but later it was so fascinating that I learnt the craft from him.”

These artists believe that if they don’t re-engage with such artisans, the art will vanish. That is one of the reasons that a 26-year-old commerce graduate from Srinagar’s Nishat area, Mohamad Omar has been training with Kumar to learn the art and keep it alive. Omar set up his own unit at his residence where he has been making these glazed tiles.

“A lot of artisans have left the work of pottery and there aren’t many taking it up. I want more and more people to join us. Haji Saab is the only person making these tiles and even his own children did not take it up. I went to him and learnt for around 6 months. I learnt how to make glazed pottery from him as he is the only person alive knowing the art. I thought of reviving the art and bringing it back to life. I did a lot of hard work. I learned how to make these glazed items here. The glaze is made at home with things which we generally throw away. Mohammad Omar,  Artisan said.

The Jammu and Kashmir government has also been pushing for the revival of endangered arts of the Kashmir Valley. Among them is Glazed pottery. The government helps artisans establish units and also provide them with raw material as well as stipend. The government is also introducing courses in glazed pottery in various art and design schools.

Mehmood Shah, Director, Handicrafts. Said “Last year we were named among the creative cities by UNESCO, we have launched several initiatives be it craft tours or revival of endangered arts of the Kashmir Valley. We have some exceptional tiles at Madeen Sahib, and these tiles are showcased in museums across the world. Tile work was going on for a long here. But unfortunately, this art form was not in good health due to the modern tiles in the market. By virtue of this intervention, we launched a scheme in 2020, to revive the languishing crafts. And we were very happy to connect the oldest and last surviving craftsman with a young entrepreneur who has made a successful intervention and he has revived the art form. He has repackaged it. It’s very important to connect local people, connect designers, and students. They do capacity building of artisans so that it remains contemporary.”

The Kashmiri tiles were used centuries ago in palaces as well as traditional Kashmiri homes. But with time, people started using ceramic tiles and with no market, the artisans were left with no choice but to stop production. And now the artists like Zoya and Omar are trying to bring back the Kashmiri Tiles into the market.