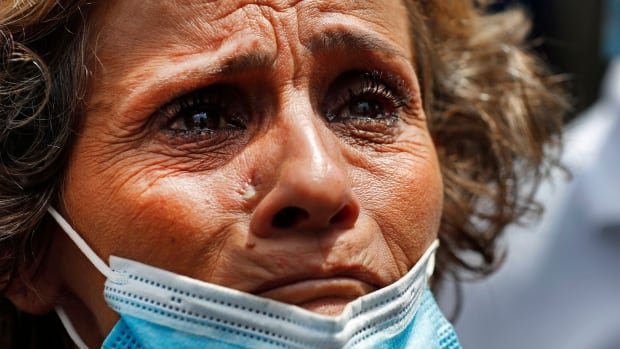 The damage at Beirut’s port, where the blast occurred, shows the full power of the explosion. 1:26

A partial view of the devastated Beirut port is pictured from the nearby neighbourhood of Mar Mikhael on Thursday, two days after a massive blast shook the Lebanese capital, killing nearly 150 people.

The satellite image below shows the port of Beirut and the surrounding area in Lebanon a day after the huge explosion.

This combination image shows the port and the surrounding area on June 9, right, and the same area on Wednesday, one day after the blast.

An aerial view shows the massive damage done to Beirut port’s grain silos and the area around it after the explosion tore through the harbour with the force of an earthquake.

A damaged grain silo and a burnt boat can be seen a day after the blast, which was reportedly felt as far away as Cyprus, some 240 kilometres away.

Here, men can be seen standing at the devastated site of the explosion.

The investigation is focusing on how 2,750 tonnes of ammonium nitrate, a highly explosive chemical used in fertilizers, came to be stored at the facility for six years and why nothing was done about it.

‘One of the biggest non-nuclear explosions in history’

The explosion was the most powerful blast ever seen in the city. Several city blocks were left littered with rubble, broken glass and damaged vehicles.

A team of British scientists said the explosion was “unquestionably one of the biggest non-nuclear explosions in history,” about a tenth of the power of the atomic bomb detonated over Hiroshima.

Authorities have cordoned off the port itself, where the blast left a crater 200 metres across and shredded a large grain silo, emptying its contents into the rubble. Estimates suggested about 85 per cent of the country’s grain was stored there.

Workers clean up debris in Beirut’s “Souks” shopping district in the centre of the Lebanese capital on Thursday.

Here, a woman who was injured in Tuesday’s blast sits next to her husband outside their damaged grocery store.

Below, a woman yells during scuffles with Lebanese soldiers who are blocking a road as Macron visits the Gemmayzeh neighbourhood, which suffered extensive damage from the explosion.

Lebanese officials targeted in the investigation of the blast sought to shift blame for the presence of explosives at Beirut’s port, and the visiting French president warned that without serious reforms the country would “continue to sink.”

French and Lebanese firefighters search for survivors in the rubble of a building on Thursday.

Lebanon’s health minister said the death toll had risen to at least 135 people, with more than 5,000 wounded and up to 300,000 people left homeless.

Here, a woman who lost her sister in the explosion mourns on her coffin during her funeral in Sarba village, southern Lebanon.