Home Middle East The power of song: How an Iranian singer’s lyrics are bringing people... 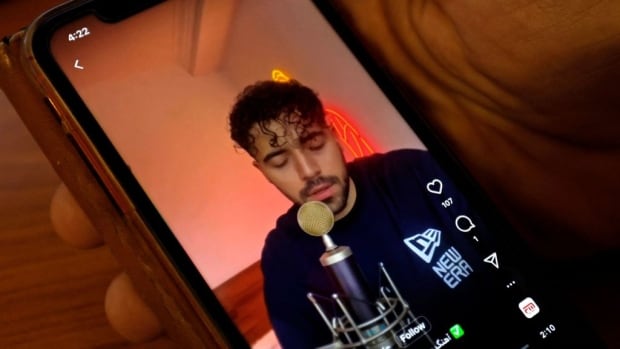 As protests against the Iranian government have been growing, a song has been echoing, uniting people across the world who are fighting for — among several things — basic human rights for women.

Baraye, which translates to “for” or “because of” in Persian, has been sung by tens of thousands of protesters during demonstrations following the death of Mahsa Amini while she was in police custody in Tehran. The song has also been used frequently in social media posts relating to the protests.

In a sense, the song has become an example of the power of music in social movements and its ability to unite people for a cause.

The song “resonates with so many Iranians because it so poetically and beautifully touches on a range of issues that concern us all as human beings,” said Shiva Balaghi, a cultural historian of the Middle East at the University of California Santa Barbara.

Shervin Hajipour, a well-known singer in Iran, released the song to his Instagram account on Sept. 28. The lyrics are composed of dozens of tweets posted by Iranians expressing why they are protesting. Each of those tweets begin with “because of.”

The protests erupted following the Sept. 16 death of Amini, a 22-year-old Kurdish woman. She was in a coma after being detained by the country’s morality police for allegedly wearing her headscarf incorrectly.

“[Hajipour] brought in the tweets of everyday people [and] their everyday sufferings into the music,” said Nasim Niknafs, an associate professor in the department of music at the University of Toronto who specializes in the relationship between music education, social justice and activism.

Niknafs, who has also published research on music in Iran, sees part of the powerful resonance of the song in the emotion it carries, something she attributes to Hajipour’s own experience.

“It wasn’t an out-of-body experience for him. He was experiencing those [hardships] every day living in the country, so he brought that as a source of inspiration.”

One of the first lines in the song is: “Because of every time we were afraid to kiss our lovers in the street,” referring to the illegality of affection in public. Another says: “Because of the girl who wished she was a boy.”

“Even if you haven’t been through it, you’ve heard about it. I think that’s why it touched so many people’s hearts because, one, it was in real time what people in Iran were saying but it’s also things you have heard before,” said Sahar Golshani, an Iranian-Canadian podcaster in Toronto who identifies as an activist and has helped organize a protest in Toronto.

“So it really hit deep down in your soul when you heard the lyrics.”

WATCH: Sahar Golshani reposted Shervin Hajipour’s video after it was taken down:

Golshani said the song is connecting Iranians, both in Iran or in the diaspora, including herself. Though she has never lived in Iran — her parents left before she was born — she says she’s still felt very connected to it because since she was a child, she’s been hearing about the hardships from her family.

“It gets to a point where you’re like: ‘I need to do something about it,'” said Golshani. “This song was kind of like a powder keg moment for a lot of us.”

Almost instantly after the song was posted on Sept. 28, it went viral, garnering more than 40 million views within 48 hours on Instagram before it was taken down. Reports indicated that the 25-year-old singer had been arrested. On Oct. 4, a statement posted on his Instagram story indicated that he was out on bail, but the song was never reposted to his profile.

Many are also circulating links on social media urging that it be nominated for a new category for the 2023 Grammy Awards: best song for social change.

“I’d love for the Grammys to recognize [Hajipour’s] song. Part of its popularity is that it’s just a beautiful song,” said Balaghi.

“The idea that he pulled together comments from social media, crowdsourcing the lyrics, really speaks to the movement…. I’ve heard it sung on the streets of [Los Angeles] by the diaspora community and in Tehran classrooms by middle school girls. That’s powerful. It speaks to this generation.”

While songs and music are a powerful element in social movements, Iran has a rich cultural history with art and it continues to play a significant role.

“Music-making is part of life in Iran. It’s how people live their lives … it’s how they think and understand the world around them,” Niknafs said.

“Even after the 1979 revolution when official institutions were not allowed to have Western classical music or popular music, like jazz, rock, metal…music was still there, poetry was still there,” said Niknafs. “They are very integrated in the fabric of the society.”

Unlike previous demonstrations in Iran, the Mahsa Amini protests have been primarily led by women and younger Iranians.

In 2020, about 37 per cent of Iran’s population was under 25 years of age, meaning a significant number of those living in Iran were not alive during the 1979 Iranian revolution or the Iran-Iraq War from 1980 to 1988.

Experts have said this makes the younger generations more fearless when being the driving force behind this movement.

“This generation is not naive. They know the risks they are taking. But they are lifting each other up to make a fundamental change,” said Balaghi. “One of the street chants is: ‘Don’t be afraid, don’t be afraid, we are together.’ It’s a struggle between hope and fear, an artist in Iran explained. And hope has grown larger than fear.”

Niknafs agrees, adding that the song is a testament of their aspirations.

“They are hopeful for a better life and it’s being mirrored in their music and the music is creating a hopefulness. It’s hand in hand,” said Niknafs.

Unlike previous movements in Iran, and despite harsh internet crackdowns, the younger generation has also found power in the use of social media.

Many have been circulating images and videos of what is happening in Iran as a means of getting their message out to international audiences.

“Gen Z and millennials have a voice and power within social media to amplify their voices,” said Golshani. “They see how social media can initiate change.”