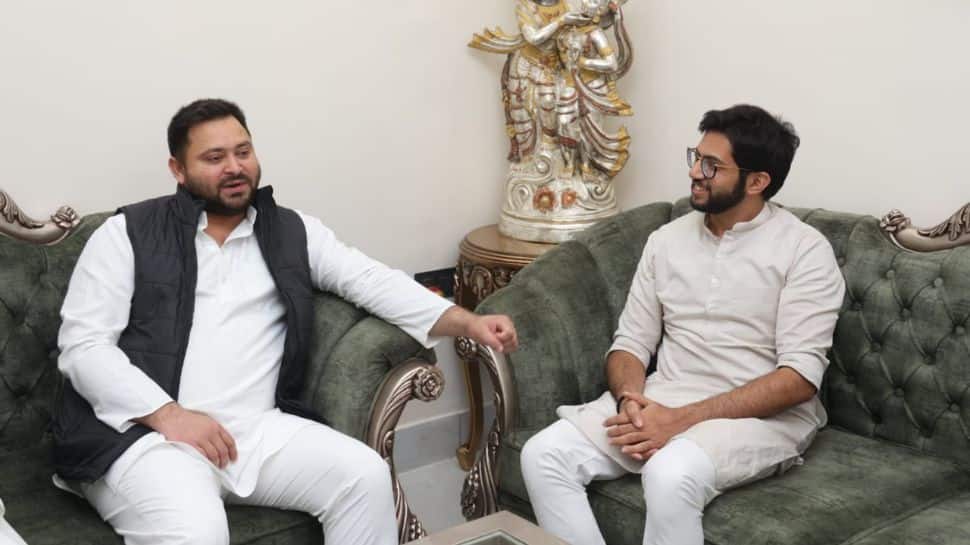 Patna: Shiv Sena (Uddhav) leader and former Minister Aaditya Thackeray on Thursday met Bihar Deputy Chief Minister Tejashwi Yadav at mother Rabri Devi’s residence in Patna. The Sena leader was accompanied by party MP Priyanka Chaturvedi. Addressing the reporters after the meet here, Aaditya Thackeray said, “We’ve been in touch with each other but could not meet due to covid. We discussed various topics but did not discuss politics. Sure this friendship will continue.” The meeting between the two young leaders is an attempt to unite opposition parties to take on the BJP in the 2024 Lok Sabha polls. “The current challenge is to save the law & the democracy & we will do anything to save it,” said Tejashwi Yadav after meeting Aditya Thackeray.

Patna, Bihar | We’ve been in touch with each other but could not meet due to covid. We discussed various topics but did not discuss politics. Sure this friendship will continue: Shiv Sena leader (Uddhav Thackeray) leader Aditya Thackeray after meeting Bihar Dy CM Tejashwi Yadav pic.twitter.com/WTq1xd59fx
— ANI (@ANI) November 23, 2022

Kumar met with the Opposition leaders after he broke his alliance with the BJP and joined hands with Tejashwi Yadav`s Rashtriya Janata Dal, the Congress, and other parties to form a `Mahagathbandhan` government in Bihar.