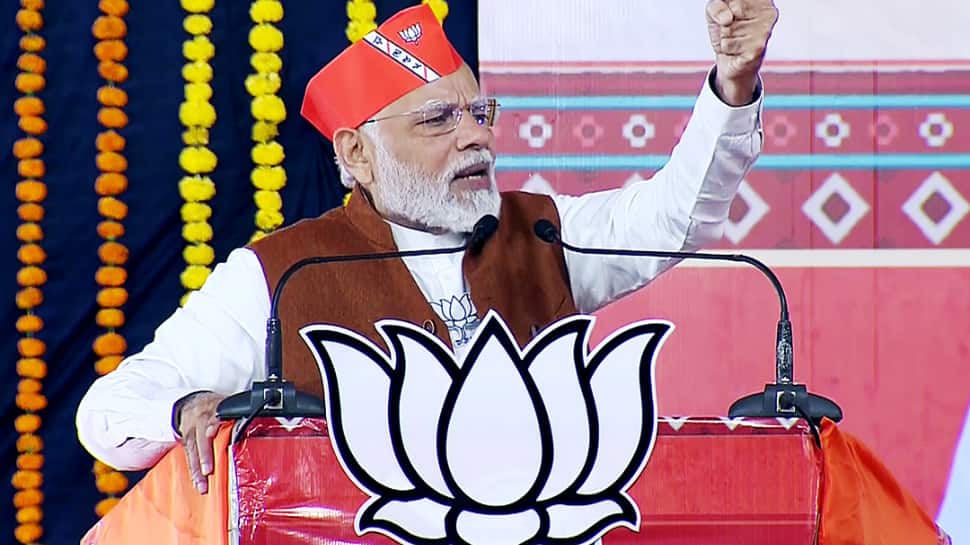 Valsad: Prime Minister Narendra Modi on Saturday, November 19, 2022, invoked Gujarati pride and appealed to the people to be wary of those who defame Gujarat and said they should not find a place in the state. Addressing a rally in Valsad district in the run-up to the next month’s Assembly elections, Modi said Gujarati people have never hurt anybody and embraced whoever comes to Gujarat. He said wherever Gujaratis go they mix like sugar in milk. Modi addressed a massive roadshow in Vapi before addressing the rally in Valsad. He was greeted by hundreds of people who queued up on both sides of the road.

“Beware of the people who want to defame Gujarat and are speaking against us. They are trying to defame Gujarat and Gujaratis. They are also trying to defame our state in foreign countries. Tell them to stop using such language. The people of Gujarat have never tried to hurt anybody. Wherever they went, they mingled with local people like sugar is dissolved in milk. If somebody comes from outside, they have embraced them,” he told the rally.

Those people who want to defame Gujarat should not find a place in the state, he said.

“Brothers and sisters, those who want to defame Gujarat should not find a place in Gujarat. We can never accept those who try to take Gujarat in reverse gear,” Modi said.

He also took a swipe at Congress, saying the bill of the current monthly data usage which is Rs 250-300 would have been Rs 5,000 had Congress remained in power.

He said the Central government has helped in making the lives of people simple and also saved money on mobile phone data.

“In the previous governments, you used to get a Rs 4,000-5,000 monthly bill to use mobile phones, Whatsapp, reels, Instagram etc. Today, due to policies of my government, you can get it for Rs 250,” he said.

He said the first-time voters are going to determine the future of Gujarat. The BJP is seeking the seventh consecutive term in Gujarat where Assembly elections are scheduled to be held in two phases on December 1 and 5. The counting of votes will be taken up on December 8.

“I have to tell them that you are not just casting votes because you have turned 18, but you are determining the future of Gujarat. You will decide the policies of Gujarat. For these youngsters, the next 25 years of their lives are of vital importance,” Modi said.

He said like the next 25 years of their life, the next quarter of the Century of India is equally important.

“I have to ask the first-time voters that your votes contain the decision of Gujarat and India for the next 25 years,” he said.

The prime minister said the budget for fishermen has risen from Rs 10-11 crore in 2015-16 to Rs 900 crore. The PM said his government has worked to empower citizens, farmers, youths, women, and fishermen, and brought policies to empower them to strengthen Gujarat.

“People ask me why I am working so hard when BJP is going to win Gujarat (elections) after I visited Arunachal Pradesh in the morning, Daman in the evening, and in between Kashi and Valsad in a single day.

“I said you are right that people of Gujarat are contesting the elections and they have decided to elect BJP,” the prime minister said.

Modi said it was his duty in a democracy to give an account of his work and seek blessings in the form of votes.

“I am here to fulfil my duty. I am your servant. In 22 years, I haven’t sat down, offering as much service as possible. Like it is my duty to ask for votes, it is also your duty to cast votes, and also to make people vote,” he added.

Modi said the power of the people’s vote is behind India’s development.

“India’s place in the world and the development in India are because of your vote for the lotus (BJP’s poll symbol). This is why the country is blossoming like a lotus. Gujarat is at the top of development because of awareness of the people, blessings of mothers and sisters and hard work of youth of Gujarat,” he said.

The prime minister recalled that Valsad did not have facilities for education earlier, but today it has everything. He also spoke about Skill University and said the 21st century is the century of skills.

“There are 80,000 startups in India, out of which 14,000 are in Gujarat alone. There is an unprecedented chance to expand entrepreneurship in Gujarat. The youth of Gujarat are becoming job providers and not job givers,” he said.

The PM also said that elections are fought neither by the BJP nor its candidates but by the people of Gujarat.

“The election is not contested by the BJP or its candidates, or Chief Minister Bhupendra Patel or Narendra Modi. The election is fought by the citizens of Gujarat. Elections are the celebration of democracy, and as many people as possible should participate in it,” he exhorted.

Modi, who embarked on the visit to his home state on Saturday, will on Sunday address four rallies in the districts of Bhavnagar, Amreli and Junagadh, BJP sources had said.