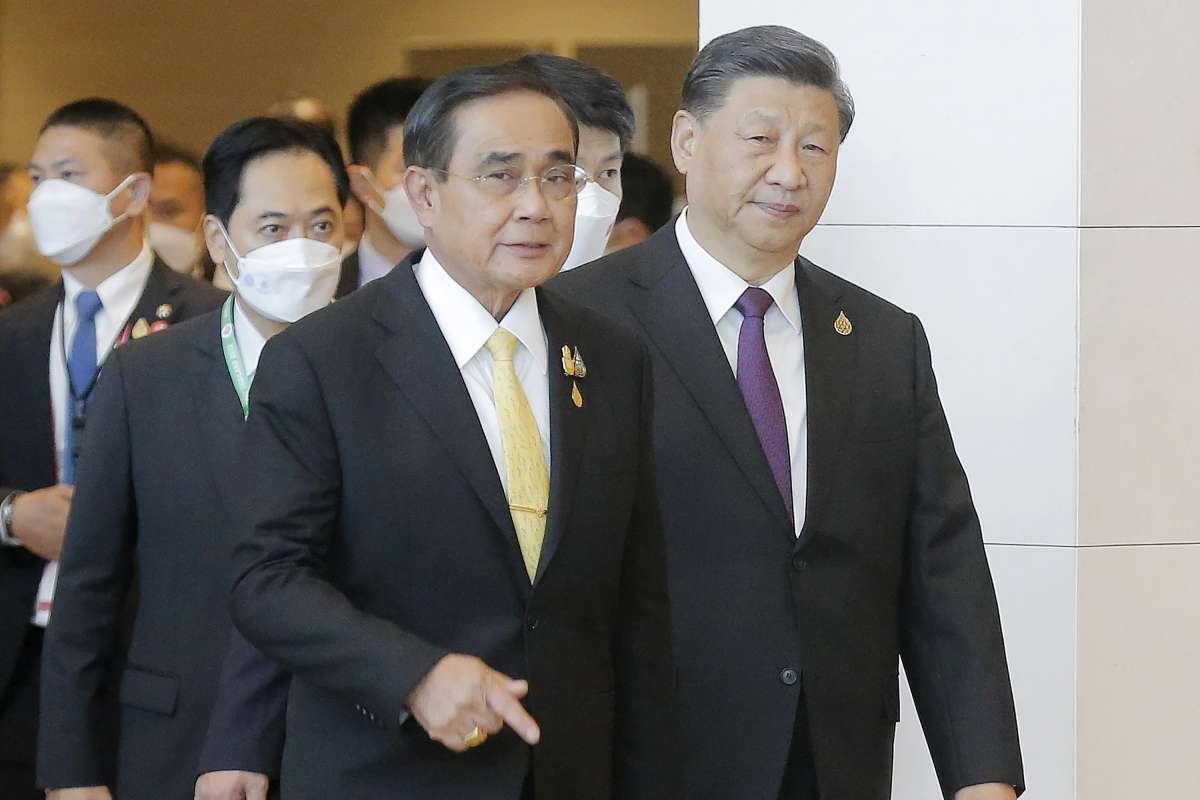 Threats to peace and stability were dominating the agenda at a summit of Pacific Rim economies Friday in Bangkok, as leaders warned that war and tensions among the big powers threaten to unravel the global order. Underscoring the risks, North Korea fired an intercontinental ballistic missile that landed near Japanese territorial waters, and Japan said the weapon may have the range to strike anywhere in the United States. North Korea is under UN sanctions for past weapons displays but has not faced fresh sanctions this year because U.S. attempts were opposed by China and Russia in the Security Council.

US officials said Vice President Kamala Harris would meet with the leaders of Japan, South Korea, Australia, New Zealand and Canada to discuss the missile launch, the latest of many such provocations by North Korea that raise the risks of conflict. “Geopolitical tensions are detracting from peace and stability and undermining the rules-based international order, which we all agree are essential,” Australian Prime Minister Anthony Albanese told fellow leaders of the 21-member Asia-Pacific Economic Cooperation forum who began a two-day summit Friday.

APEC’s long-term mission is promoting regional economic integration, but more immediate exigencies often dominate the agenda. That’s true in Bangkok, as leaders appeal for an end to Russia’s war on Ukraine and consider strategies for nursing along economic recoveries from the coronavirus pandemic while contending with food and energy crises, the need to cut the carbon emissions that cause climate change and other urgent tasks.

“The circumstances we face today as economic leaders, multiple overlapping global crises, could not be more pressing as they inundate our region,” Albanese said.

Speaking to a business conference on the sidelines of APEC, French President Emmanuel Macron echoed that call for a restoration of the global order and an end to confrontation, both in Ukraine and also in Asia, where he said friction between the biggest economies, the U.S. and China, was forcing countries to take sides. “There is no stability or peace except one based on international order and respect,” said Macron, who was invited to the APEC summit as a guest by the host country, Thailand.

The rise of Asia to become an engine for global growth owes its success to trade “governed by common rules, global rules,” Macron said, saying multiple crises may have taken the world to a “tipping point.” The APEC gathering is the third back-to-back meeting of world leaders this week after the summits of the Association of Southeast Asian Nations last week in Cambodia and the Group of 20 leading economies, which wrapped up Wednesday in Indonesia.

In Bangkok, host Thailand has the challenge of trying to bridge divisions and forge a consensus. Prime Minister Prayut Chan-ocha has sought to embed the concept of sustainability into APEC’s agenda. “We need to change our ways of life and ways of doing business,” Prayut said in opening the leaders’ meeting on Friday focused on sustainable economic growth. US Secretary of State Antony Blinken said Thursday that he saw signs of a “convergence” in views about how to move forward in solving the world’s problems, after meetings of foreign and commerce ministers ahead of the summit.

Whether that might enable Thailand to produce a final joint statement after the summit’s closed-door sessions remained to be seen; consensus generally is required among the 21 APEC members, including Russia. None of the earlier APEC preparatory meetings this year issued statements due to disagreements over whether to mention the conflict.

But leaders of the Group of 20 did manage a show of unity when China and India, after months of refusing to condemn Russia’s war in Ukraine, did not impede the release of a statement that harshly criticized Moscow. Asked about the prospects for a show of unity, U.S. Secretary of State Antony Blinken said he did not want to “get ahead” of the talks. But, “on issue after issue we’re seeing, as I said, a growing convergence among the major countries in the world,” he said.

With both President Joe Biden and Russian President Vladimir Putin absent, Chinese President Xi Jinping is the star attendee in Bangkok.
Speaking Thursday to the business conference, which was largely closed to media apart from outlets sponsoring the event, Xi warned against a “new Cold War” and attempts to dismantle supply chains built over decades.

He called for strengthened cooperation and progress in achieving APEC’s vision of an open Asia-Pacific economy. In one step forward, most of the APEC region has fully reopened to travel after two years of often severe restrictions and border controls to fight the COVID-19 pandemic. Xi had stayed close to home throughout most of the pandemic, making his first trip outside China since it began only in September.

The Chinese economy has slowed sharply under restrictions meant to quash COVID-19 outbreaks that have flared anew: the government reported 23,276 new COVID-19 cases across the country Thursday and the southern metropolis of Guangzhou was planning to build quarantine facilities with almost 250,000 beds to cope with outbreaks.

Apart from the French president, Thailand also invited Crown Prince Mohammed bin Salman, the prime minister of Saudi Arabia; and Cambodian Prime Minister Hun Sen, who was to represent ASEAN but is not attending after getting COVID-19. The summit venue, at Bangkok’s main convention center, was cordoned off with some streets closed to traffic. Riot police stood guard behind barricades at a major intersection, underscoring Thailand’s determination to ensure no disruptions. Protesters, who scuffled with police on Thursday and gathered in greater numbers at another area on Friday, were kept well at bay.