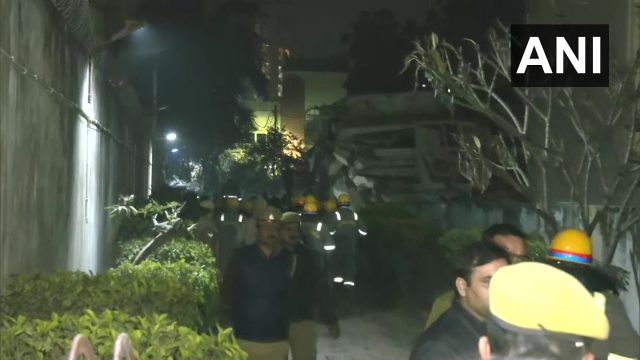 Three people are feared dead and at least 20 are believed to be trapped under rubble and debris after a four-storey residential building collapsed in Uttar Pradesh’s capital Lucknow on Tuesday evening. ANI

Lucknow: Three people are feared dead and at least 20 are believed to be trapped under rubble and debris after a four-storey residential building collapsed in Uttar Pradesh’s capital Lucknow on Tuesday evening.

Earlier in the day, an earthquake had been reported across northern India at about 2.28 pm triggering tremors across Delhi-NCR, Uttar Pradesh and Uttarakhand.

The earthquake’s epicentre was in neighbouring Nepal at a place 148 km east of Pithoragarh in Uttarakhand. This is the latest in a series of earthquakes which have hit the Himalayan country in the last couple of months. The earthquake measured 5.8 on the Richter Scale.

Administrative officials in Lucknow are yet to ascertain whether the tremors had weakened the old building located in Hazratganj.

Rescue workers estimated that at least four families are believed to be trapped under the debris in Lucknow’s Hazratganj area. Members of three families have so far been rescued.

Lucknow’s iconic Hazratganj locality is dotted with old and crumbling buildings. The building that collapsed on Tuesday evening was called Alaya Apartments.

Uttar Pradesh deputy chief minister Brijesh Pathak is on the spot, overseeing search and rescue work involving teams of the state and personnel from the National Disaster Response Force (NDRF). “The building collapsed suddenly. Three bodies have been found and sent to the hospital. NDRF, fire brigade personnel are present at the spot. Rescue operations are underway,” the deputy chief minister said.

Uttar Pradesh chief minister Yogi Adityanath has directed administrative officials to provide adequate treatment facilities to those who have been injured in the building collapse. The Uttar Pradesh government has also issued directions to hospitals to stay on alert.