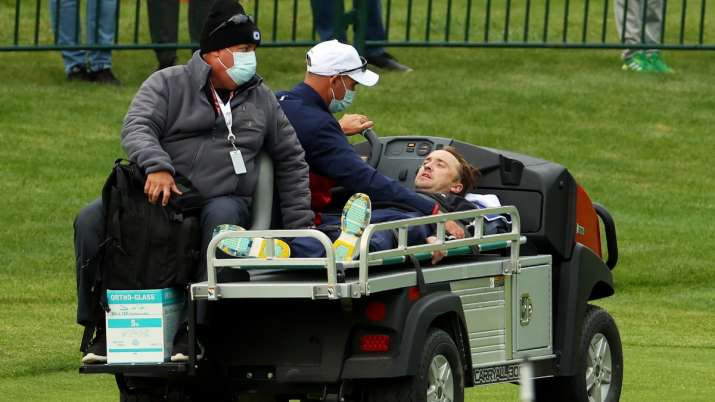 Hollywood actor Tom Felton, best known for playing Draco Malfoy in Harry Potter films collapsed on a golf course while taking part in the Ryder Cup celebrity tournament. Actor Tom Felton’s friend has given a health update about the ‘Harry Potter’ star. According to Fox News, the British actor known for his portrayal of Draco Malfoy is “okay,” per his friend, Derek Pitts. “He’s okay, speedy recovery brother,” Pitts wrote on his Instagram Stories.

Ryder Cup organizers said that Felton experienced “a medical incident” at Whistling Straits and was taken to a local hospital for treatment. They provided no other information at the time.

Felton was on the 18th hole when he went down. He was helped to his feet, placed on a stretcher, and driven away in a golf cart. As per Fox News, Felton was representing Europe in the celebrity match, which is held the day before the U.S. and Europe start the Ryder Cup.

As the news broke, concerned fans took to social media wishing him well. “We believe in you love! you are strong, we love you, it will be alright,” wrote a user. While another tweeted, “@TomFelton hope you’re doing well now. Get well soon #TomFelton #dracomalfoy.”

This certainly isn’t the first golf tournament Tom has been a part of. Earlier this month, he was spotted in England participating in the Pro-Am event prior to The BMW PGA Championship at Wentworth Golf Club.

He also headed to Hawaii in January 2020 where he showed off his golf skills at the Sony Open. Apart from his golfing stints, Tom will also be seen in the upcoming drama ‘Lead Heads’ with Rupert Everett.