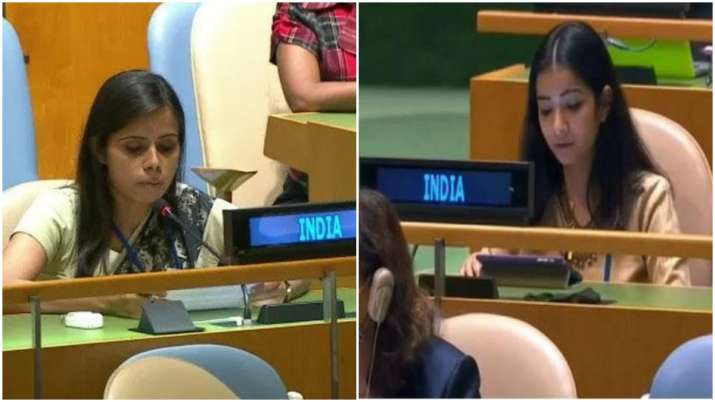 First Secretary Sneha Dubey gave a blistering retort to Prime Minister Imran Khan in the UN General Assembly after he raked up the Kashmir issue in his address to the high-level session, continuing with a tradition of India’s young diplomats taking on Pakistani leaders at the annual event.

Dubey delivered India’s strong Right of Reply on Friday from the UNGA hall, carrying on with a tradition seen over the past few years of young Indian diplomats taking on Pakistani leaders and strongly responding to their rants over Jammu and Kashmir and other internal matters of India.

“We exercise our Right of Reply to one more attempt by the leader of Pakistan to tarnish the image of this august Forum by bringing in matters internal to my country, and going so far as to spew falsehoods on the world stage,” Dubey said in the UN General Assembly.

“While such statements deserve our collective contempt and sympathy for the mindset of the person who utters falsehood repeatedly, I am taking the floor to set the record straight,” the young Indian diplomat said, slamming the 68-year-old cricketer-turned politician for raking up the Kashmir issue in his video address to the 76th session of the UN General Assembly.

Dubey, a 2012 batch IFS officer, has an MA and MPhil from Jawaharlal Nehru University and was Under Secretary (T) Latin America and Caribbean in the Ministry of External Affairs from December 2013 to August 2014. She was then Third Secretary in the Embassy of India in Madrid, according to her LinkedIn profile.

“Excellent rebuttal by this brilliant, young, energetic diplomat of this great nation,” a Twitter user said while another commented “A brave diplomat of India.. Great job.”

Another post on Twitter said, “A befitting reply by @SnehaDube Full of confidence and facts. Well done. Keep it up” while many others applauded India’s “Nari Shakti (women power)”.

It was during the tenure of then Indian envoy at the UN Ambassador Syed Akbaruddin that the trend began of India fielding young diplomats to deliver the Right of Reply to Pakistani leaders who consistently rake up the Kashmir issue and other internal matters of India in their addresses to the UN General Assembly and other forums of the world organisation. The message being that India’s young diplomats are enough to take on Pakistan’s leaders at the global forum.

“The world has not yet forgotten that the trail of that dastardly attack led all the way to Abbottabad in Pakistan. The land of Taxila, one of the greatest learning centres of ancient times, is now host to the Ivy League of terrorism. It attracts aspirants and apprentices from all over the world. The effect of its toxic curriculum are felt across the globe.”

Then again in 2017, it was Gambhir who took on then Pakistan Prime Minister Shahid Khaqan Abbasi, saying in India’s Right of Reply that “In its short history, Pakistan has become a geography synonymous with terror. The quest for a land of pure has actually produced ‘the land of pure terror’. Pakistan is now Terroristan… Its current state can be gauged from the fact that Hafiz Mohammed Saeed, a leader of the United Nations designated terrorist organisation Lashkar-e-Taiba, is now sought to be legitimised as a leader of a political party.”

“Words matter in diplomacy. Invocation of phrases such as ‘pogrom’, ‘bloodbath’, ‘racial superiority’, ‘pick up the gun’ and ‘fight to the end’ reflect a medieval mindset and not a 21st century vision.”

“We would request you to refresh your rather sketchy understanding of history. Do not forget the gruesome genocide perpetrated by Pakistan against its own people in 1971 and the role played by Lt. Gen A A K Niazi. A sordid fact that the Hon’ble Prime Minister of Bangladesh reminded this Assembly about earlier this afternoon.”

In 2019, Khan had delivered his maiden speech at the UN General Debate and in his almost 50-minute address, devoted half of his time to India and Kashmir, drumming up hysteria over nuclear war.

“Even coming from the leader of a country that has monopolized the entire value chain of the industry of terrorism, Prime Minister Khan’s justification of terrorism was brazen and incendiary,” Maitra had said.

“Citizens of India do not need anyone else to speak on their behalf, least of all those who have built an industry of terrorism from the ideology of hate,” she said.

Last year, First Secretary in the Permanent Mission of India to the UN Mijito Vinito, delivering India’s Right of Reply, had said that the “only crowning glory” that Pakistan has to show to the world for the last seven decades is terrorism, ethnic cleansing, majoritarian fundamentalism and clandestine nuclear trade. India’s scathing response slammed Pakistan Prime Minister Imran Khan’s “incessant rant” and “venom” in the UN General Assembly.

“This august Forum witnessed today a new low on its 75th Anniversary. The leader of Pakistan today called for those who incite hate and violence to be outlawed. But, as he went on, we were left wondering, was he referring to himself?” Vinito had said.

ALSO READ: At UNGA, India to use its right to reply in response to Imran Khan’s references on Kashmir