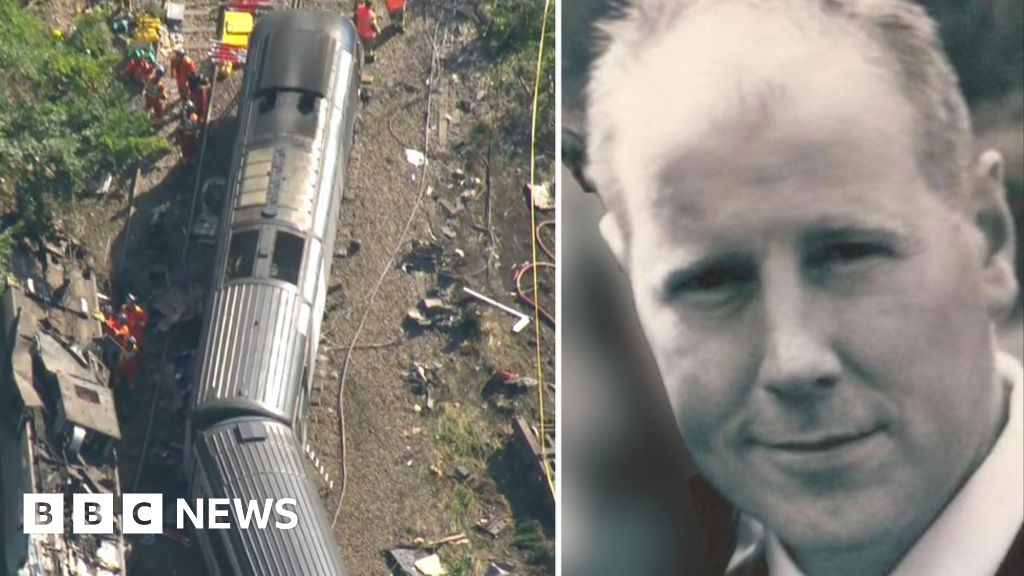 The family of a train driver who was killed in a derailment in Aberdeenshire say his death has left a “huge void” in their lives.

Brett McCullough, conductor Donald Dinnie and a passenger died when the Aberdeen to Glasgow service derailed near Stonehaven on Wednesday.

A major investigation is under way.

In a statement issued on behalf of his family, she added: “We have lost a wonderful husband, father and son in the most awful of circumstances.

“Brett was the most decent and loving human being we have ever known and his passing leaves a huge void in all our lives.

“We would like to thank the emergency services for their heroic efforts in helping everyone affected by this tragedy and for all the messages of support and condolence we have received.”

The 45-year-old father-of-three was originally from Bromley in Kent. He worked out of the Aberdeen rail depot and lived near the scene of the derailment.

Kevin Lindsay, Scotland organiser for the train drivers’ union Aslef, said: “He was a dedicated train driver, who loved his job, and was very popular at the depot with his colleagues. We all thought the world of him.”

The RMT union paid tribute to Mr Dinnie, who also worked as a driver and a guard during his railway career.

Senior assistant general secretary Mick Lynch said: “It is absolutely clear that he was much loved and highly respected by all who knew him and his death is a tragedy that has shocked our entire industry.

“Donald’s branch have told me that ‎he was an amazing person. He lit up every room he walked into with his cheery banter and stories.”

It is thought that the 06:38 Aberdeen to Glasgow Queen Street service was derailed by a landslide after heavy rain in the area. The alarm was raised at about 09:40.

Three people died and six others were taken to Aberdeen Royal Infirmary. NHS Grampian said four of them had been discharged, while the other two patients were in a stable condition.

First Minister Nicola Sturgeon said the “hearts of a nation” were with those affected.

Mr Shapps has asked Network Rail to produce an interim report by 1 September on the “wider issues” that may have led to the derailment.

He said he wanted to see resilience checks carried out in “the next few days, few hours”, given the concern about flash floods in the area.

“We absolutely need to make sure it doesn’t happen again and that’s why I’ve asked Network Rail to deliver that report to me so quickly,” he said.

He also said he spoke with Pc Liam Mercer, the first officer on the scene, and commended him for his bravery.

Mr Matheson said he did not want to speculate about what had caused the incident.

“What I think we can assess, though, is that weather has had an impact,” he said.

“We are seeing increasingly a higher level of what are localised intense weather events that are having an impact on the transport network, including the rail network.

“What we need to do as part of the investigation is identify to what extent it had an impact and also to see what lessons can be learned.”

He said some parts of the country had seen a month’s rainfall in just a couple of hours on Tuesday night and Wednesday morning.

He added that the derailment happened as the train driver was heading north, trying to return to Aberdeen, and that one crew member got out of the derailed train to prevent any other trains coming down the track.

Mr Haines said he did not want to pre-empt the outcome of the investigation.

But he added: “It is clear the weather was appalling and there were floods and landslips in the area.

“Our climate is changing and it is increasingly challenging the performance and reliability of the railway, but incidents like yesterday’s devastating accident are incredibly rare, and our railway remains the safest major railway in Europe.

“Yesterday was a tragedy, a truly horrific event, and my thoughts remain with everyone affected. Understanding what happened is the key to making sure it never occurs again.”

Network Rail said it would carry out detailed inspections of high-risk trackside slopes with similar characteristics to the site of the Aberdeenshire crash.

Dozens of sites across Britain will be assessed using in-house engineers, specialist contractors and helicopter surveys.

Scotland’s Lord Advocate has asked Police Scotland, British Transport Police and the Office of Rail and Road, the independent regulator, to conduct a joint investigation into the accident.

It will be carried out under the direction of the Crown Office and Procurator Fiscal Service, and will run in parallel to the independent safety investigation being carried out by the Rail Accident Investigation Branch.