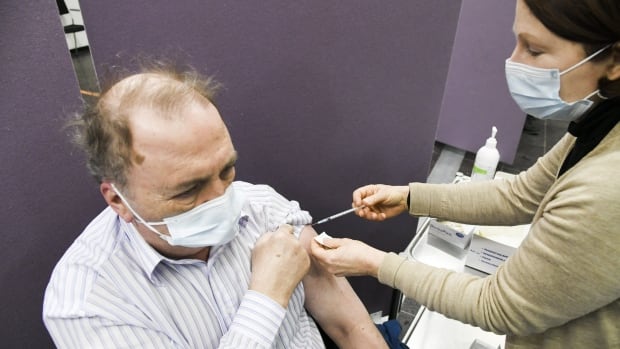 Prime Minister Justin Trudeau said today the AstraZeneca-Oxford COVID-19 vaccine is safe and Canadians should have no concerns about receiving it, after nearly a dozen European countries suspended its use over concerns about blood clots.

“Health Canada and our experts have spent an awful lot of time making sure every vaccine approved in Canada is both safe and effective,” Trudeau said.

“The best vaccine for you to take is the very first one that is offered to you. That’s how we get through this as quickly as possible and as safely as possible.”

Trudeau said regulators are “following what has been happening with a specific batch used in Europe.” He said none of the AstraZeneca doses deployed in Canada have come from that batch.

All of Canada’s current supply is manufactured by the Serum Institute of India, which secured separate regulatory approvals from Health Canada. That version, which is biologically identical to the AstraZeneca shot but is manufactured under different conditions, has been branded “Covishield.”

Out of the approximately 5 million European residents who have received AstraZeneca’s shot, about 30 have experienced “thromboembolic events” — clots forming in blood vessels — and a very small number of deaths have been reported.

Quebec Premier François Legault, who joined Trudeau today for a funding announcement for an electric battery plant in Montreal, said health officials in the province have told him there’s nothing to worry about.

“There’s absolutely no risk associated with the AstraZeneca vaccine. It’s in fact safe,” he said in French. “They’re assuring us there’s no risk.”

Trudeau said he will not hesitate to get a COVID-19 vaccine when the time comes. “I will wait my turn,” he said.

Other world leaders — like U.S. President Joe Biden, who, at 78, is much older than the 49-year-old prime minister — have received their shots publicly to boost public confidence in the products’ safety and efficacy. Trudeau’s mother, Margaret, recently received a dose.

WATCH: Trudeau says ‘I will wait my turn’ for COVID-19 vaccine

Prime Minister Justin Trudeau said he will wait for his turn to receive a COVID-19 vaccine. 0:59

On Monday, Germany joined Denmark, the Netherlands, Norway, Iceland and Ireland and other countries in suspending the use of the vaccine as it probes the blood clot incidents.

The European Union’s medicines agency and the vaccine maker itself have said that blood clots are not uncommon and there’s nothing to indicate that the vaccine is to blame for these events.

“A careful review of all available safety data of more than 17 million people vaccinated in the European Union and U.K. with Covid Vaccine AstraZeneca has shown no evidence of an increased risk of pulmonary embolism, deep vein thrombosis or thrombocytopenia, in any defined age group, gender, batch or in any particular country,” the company said in a statement.

The World Health Organization said in a media statement Monday its global advisory committee on vaccine safety is “carefully assessing the current reports related to the AstraZeneca vaccine.”

“As of today, there is no evidence that the incidents are caused by the vaccine and it is important that vaccination campaigns continue so that we can save lives and stem severe disease from the virus. The AstraZeneca vaccine has been administered to more than 10 million people in the United Kingdom with no evidence of related serious adverse events.”

The U.K. Medicines and Healthcare Products Regulatory Agency (MHRA) said Sunday there is no evidence the vaccine has caused any problems in that country — the AstraZeneca product has been in use there for months — and people should still get vaccinated when it’s their turn.

“Blood clots can occur naturally and are not uncommon. More than 11 million doses of the Covid-19 AstraZeneca vaccine have now been administered across the U.K.,” the MHRA told BBC News.