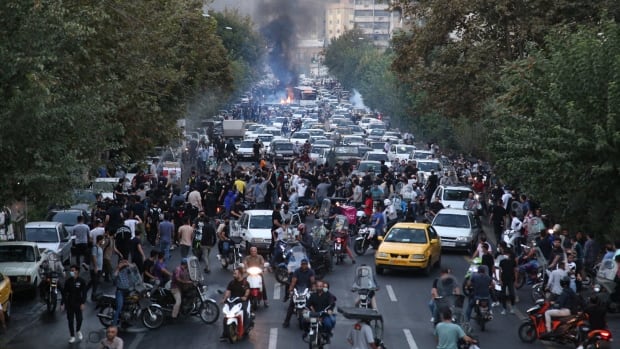 Prime Minister Justin Trudeau announced Monday that Canada will levy sanctions on “dozens” of Iranian individuals and entities — including the country’s so-called “morality police” — as security forces in Iran continue to crack down violently on protesters.

Iran has been rocked by protests since Mahsa Amini, a 22-year-old woman, died after being detained by Iran’s morality police this month — allegedly for not wearing her hijab properly.

The demonstrations have spread to all of Iran’s 31 provinces as people take to the streets to express their anger with Iran’s theocratic government and its heavy-handed policing of what women wear.

According to Iran’s state media, at least 41 people have been killed during the protests. The state deployed live ammunition against demonstrators and has beefed up security forces in Kurdish areas of western Iran, where the protests have been concentrated.

“To the women in Iran who are protesting and to those who are supporting them: We are with you,” Trudeau said.

“We join our voices — the voices of all Canadians — to the millions of people around the world demanding that the Iranian government listen to its people, end their repression of freedom and rights, and let women and all Iranian people live their lives and express themselves peacefully.”

Trudeau didn’t say who exactly would be sanctioned.

In a media statement, a spokesperson for Foreign Affairs Minister Melanie Joly said it’s Canada’s “intention” to sanction some Iranians, including members of the morality police and its leadership, but offered no other specifics.

“We will be able to provide more details on these sanctions in due course,” the spokesperson said.

The Guidance Patrol, also known as the morality police, consists of vice squads that enforce a religious dress code in public.

Under Iranian law, all women over a certain age (usually defined as women past puberty) must wear a head covering and loose clothing while in public. Men must also dress modestly — but activists claim women are more often the target of enforcement action.

These restrictions have been in place since shortly after the 1979 Iranian revolution brought to power a hard-line ultra-conservative government led by clerics.

Since the 2021 election to the presidency of Ebrahim Raisi — a noted Islamist — the morality police have stepped up their patrols in the country’s major cities.

The protests are fuelled not only by a backlash to mandatory veils for women but also by frustration with Raisi’s handling of inflation (the annual inflation rate in Iran surged to 52.5 per cent in June 2022, according to the Statistical Centre of Iran), the fallout from crippling international sanctions and a water crisis.

Since Iran shot down Flight PS752 — killing dozens of Canadians in the process — there have been calls from Opposition Conservatives and others for the federal government to take a harder line on Iran and declare the country’s Islamic Revolutionary Guard Corps (IRGC) — a paramilitary force tasked with defending the regime against internal and external threats — as a terrorist organization.

Asked about the IRGC, Trudeau said Canada “already has one of the strongest sanctions regimes in the world and we’re going to be there to do more.”

“We have sanctioned some individuals, members of the IRGC, and we’re going to keep on considering anything else we can do with regard to sanctions,” he said.

Canada has imposed an arms embargo on Iran, seized some regime-related assets, issued export and import restrictions and levied financial prohibitions to protest the destruction of PS752, Iran’s nuclear weapons ambitions and the country’s many other human rights abuses.